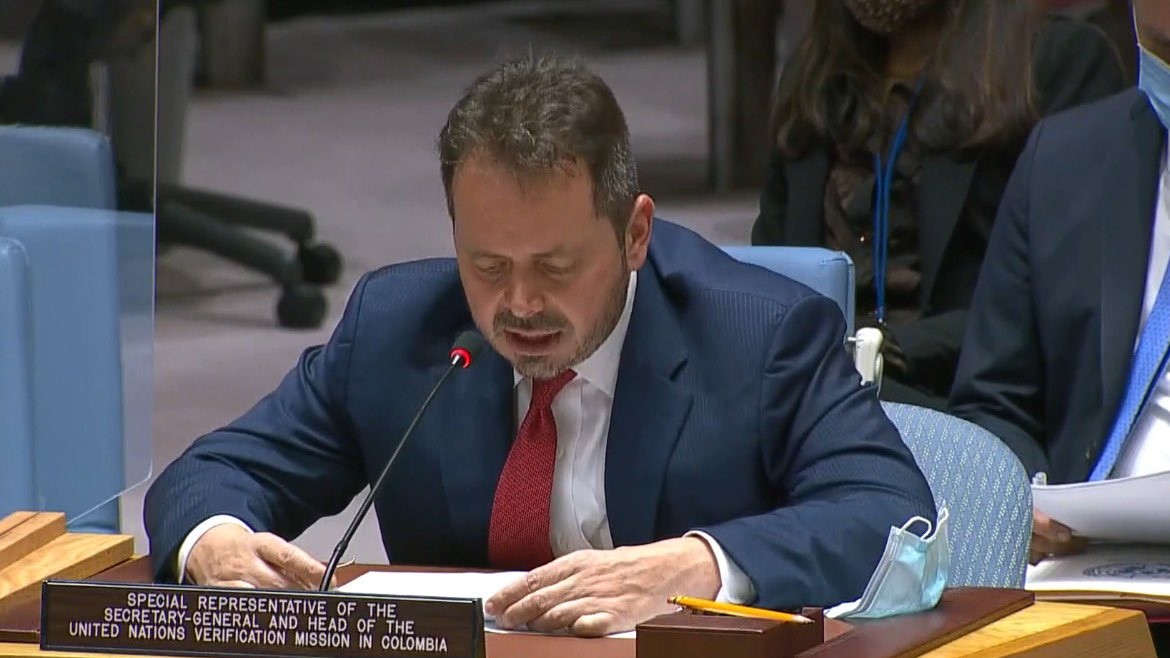 The reintegration of demobilized FARC guerrillas is being threatened by ongoing violence and the failure of Colombia’s government to provide farmland, the United Nations said Thursday.

The government’s selective implementation is “insufficient to deactivate the factors that underpinned decades of armed conflict and to achieve the Agreement’s transformative potential,” said Ruiz.

The UN chief stressed that attacks on former FARC fighters and failures to implement the peace deal are threatening the reintegration of the 13,000 former guerrillas who are taking part in the peace process.

While the Security Council met in New York City, Senator Victoria Sandino who demobilized with the FARC in 2017 announced the latest assassination of a former guerrilla.

Yesterday I said that being a signatory of the Agreement is permanent mourning and today, to confirm this, we were informed that Maria Steffania Muñoz Villa was murdered. She was a signatory of the Peace Accord and the tenth killed female ex-guerrilla since the signing of the peace deal.

According to Ruiz, “286 men and women who laid down their arms have been killed by the actions of armed actors” over the past five years.

Thirty-eight reintegrating former guerrillas have been assassinated so far this year, according to think tank Indepaz.

Assassinations of former FARC fighters in 2021

In his quarterly report, UN Secretary General Antonio Guterres in September warned about “a significant deterioration in security for former combatants in southwest Colombia.”

The UN chief added that community leaders and human rights defenders are being threatened by similar violence.

At least 136 social leaders have been assassinated so far this year, mainly in areas that were effectively controlled by the FARC until the guerrillas’ demobilization.

The so-called National Commission on Security Guarantees, which is supposed to improve security of former FARC fighters and vulnerable communities “has not met for the past six months,” according to the UN’s latest report.

The working group on land, which is supposed to provide farmland that would allow rural former FARC members to provide for themselves “did not meet during the reporting period.”

Meanwhile, “there have been persistent delays in the provision of food to all 24 former territorial areas for training and reintegration owing to increased food prices and a change in the service provider,” according to the UN.

The accumulation of failures has forced demobilized guerrillas to leave their reintegration sites, Ruiz told the Security Council.

As one female leader of the former combatants in Meta put it: “so many efforts and so many investments may be now in jeopardy.” To protect hard-fought gains, she added, decisive actions are required on matters such as land, housing, sustainable income generation and security. Otherwise, she fears, former combatants will continue to be forced to relocate in search for better opportunities and/or to preserve their lives.

The UN mission chief urged the government to step up the acquisition of land for former FARC guerrillas “so that the endeavors of more former combatants across the country can, literally, take root.”

“Deeper transformations are required to consolidate the reintegration process” and elements of the peace deal that were meant to help communities that have suffered the most from the armed conflict, according to Ruiz.

The long-term success of initial investments is contingent upon the Agreement’s promise of reshaping rural Colombia by establishing sustainable development opportunities, and State services and institutions for communities whose expectations remain unfulfilled.

The UN mission chief stressed that “the implementation of the comprehensive rural reform and the solution to the problem of illicit drugs will be instrumental” for the peace process’ success.