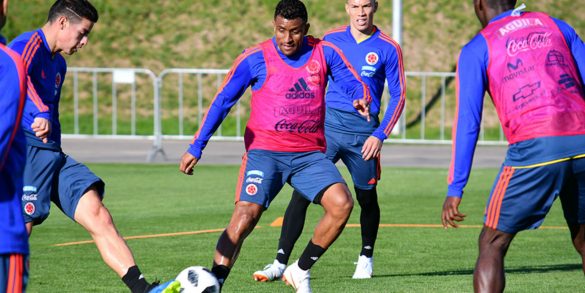 Preview – Do or die in World Cup as Colombia faces Poland

Colombia’s national soccer team faces a crunch game with Poland in Group H of the FIFA World Cup on Sunday, aiming to reignite hopes of qualifying for the second stage after an opening day defeat.

“Los Cafeteros” fell to a surprise 2-1 loss to Japan in the first group game and now desperately need to get a result against a Poland team that lost the first fixture to Senegal to put themselves back in the running to qualify for the last 16.

It is indeed likely that Colombia will need to win both remaining games against Poland and Senegal to ensure a place in the knockout stages, a situtation that team captain Radamel Falcao is acutely aware of.

“We are in a situation in which we are forced to win. And we must do everything possible to win,” said Falcao to reporters at the team’s training base in Sviyazhsk just outside Kazan.

“We are now facing two teams who need to win, so for us these games will be like finals. It’s them or us. We’ve already put the Japan match behind us,” added the team captain ahead of the clash at the Kazan Arena.

Colombia will be without defensive midfielder Carlos Sanchez, who was sent off within three minutes against the Japanese but star playmaker James Rodriguez is likely to start after coming off the bench in the defeat.

Coach Jose Pekerman could call on his favored Abel Alguilar to replace Sanchez but Wilmar Barrios and Mateus Uribe are also likely be in contention if the veteran Argentine opts to rejig a midfield that struggled for large patches of the Japan game.

Pekerman will also be concerned about how his team performed defensively in the opener with Barcelona’s Yerry Mina another possible option for a change at center-back after he confirmed on Saturday that AC Milan’s Cristian Zapata is still struggling with injury.

If Colombia is to cause significant problems for Poland in attack, Pekerman will need to find a balance that maximizes the threat of the trio of Juan Cuadrado, James Rodriguez and Falcao.

While Juan Fernando Quintero made a huge impact in the Japan game, the former Argentina coach hinted at a press conference that playing the River Plate star alongside James from the start is unlikely.

“Unfortunately, Juanfer has been outside of the national team for sometime and he has only been integrated a while ago,” said the coach to reporters.

The Polish find themselves in the same position going into the game, needing to recover from a surprise defeat in their tournament opener.

Caoch Adam Nawalka is likely to recall Kamil Glik to the heart of defense, after he missed the first game with a sprained shoulder.

While Poland went into the first game as favorites, an energetic, physical Senegal dominated the midfield and picked holes in a defense that was far from composed, while also managing to curb the influence of talisman Robert Lewandowski up-front.

Colombia will have to produce something similar in a clash that represents the last chance for both sides to save their World Cup dream in Russia.

Over the past four World Cups, only four of 46 teams to lose their first game have qualified for the last 16, a statistic that makes grim reading for Colombian fans.

Colombia has won only two of their nine previous World Cup games against European opponents drawing two and losing five.

The Andean nation will take on Senegal in the final group game on Thursday at the Samara Arena.