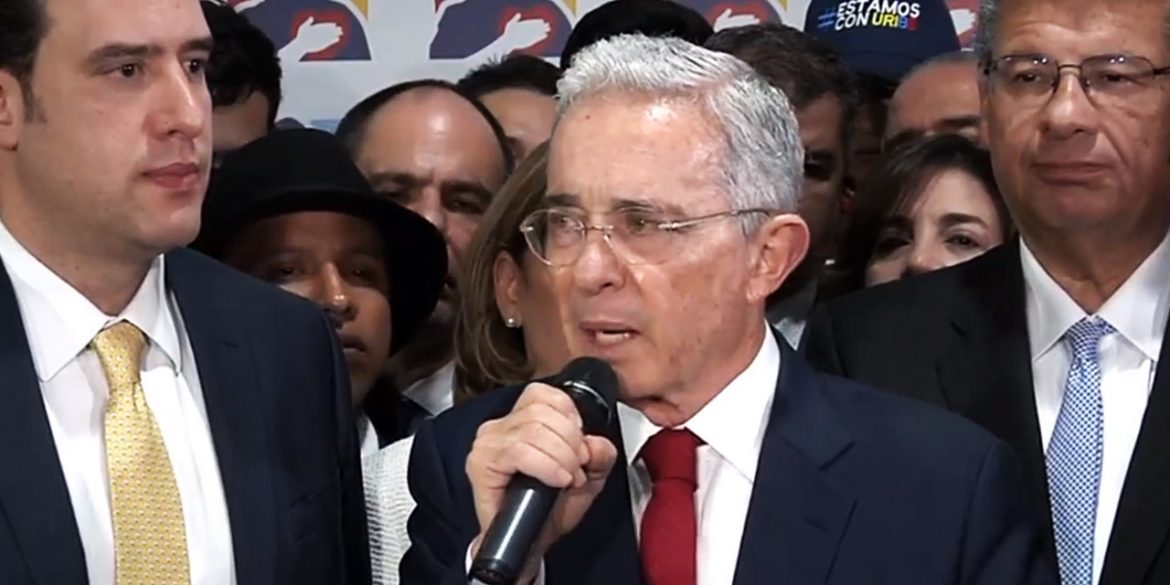 Plot twist in Colombia’s trial of the century: did Uribe babble himself into jail?

According to opposition Senator Ivan Cepeda, Uribe violated his gag order related to the case in a lengthy speech on Tuesday that was “plagued with lies.”

Uribe’s defense attorney, Jaime Granados denied this. The lawyer told RCN Radio that Uribe was “legitimately exercising his right to the defense of his honor.”

This may be so, but according to Colombia’s criminal procedure code, Uribe and his lawyers have “the obligation to maintain confidentiality.”

The fact of being subject of proceedings imposes the obligation to maintain confidentiality.

An hour after the court formalized the criminal charges, Uribe took to social media outlets for an extensive monologue laden with proven lies, distortions of the truth and political propaganda.

In an apparently blatant disregard of the law, Uribe publicly revealed previously unknown details about a reported bribe, a witness testimony and things the former president claimed to have told the magistrate.

They also told me about a bribe, and I wanted to examine it. Look, in the last few weeks, attorney [Diego] Cadena, 10 months after a statement by a witness, Carlos Enrique Velez, gave him two million pesos for humanitarian reasons. I went to the office and said “man, Mr. Diego, if you had consulted me I would have said no way, definitely not.” Then it appeared in the proceedings that it was seven million, and the gentleman said that they had bribed him to tell a lie in favor of Alvaro Uribe. I said “magistrate, I think you have to look at two things, the amount and you have to look at something else. I was informed in the last few weeks, recently, and here what was always sought was to tell the truth and that crime of bribery of witnesses demands that it be to induce them to keep silent or alter a reality or tell a lie. And where is this?”

“If that is not violating confidentiality, then what is?”

“Last night we heard — for more than an hour and a half — a long intervention by former President and Senator Uribe in which he punctually and directly referred to each one of the matters that are part of this process and the case file,” Cepeda told television network Caracol.

Additionally, Uribe referred “to concrete questions that the sitting magistrate asked him and the answers that he gave. If that is not violating confidentiality, then what is?”

This morning when the prosecutor, the magistrate that led the interrogation asked me about it, I said “this entire story is with the Prosecutor General’s Office but I will repeat it” and I repeated it.

The court did not respond to Uribe’s speech or Cepeda’s claims, but is expected to call Uribe to appear again within weeks once it has examined all the evidence.

If at the end of the investigation, reasons still exist or have arisen to consider that there is a need to impose insurance measures, the judicial officer may — within the same procedure — order the deprivation of liberty.

The court has the last word

Uribe’s alleged attempt to “politically finish off” with Cepeda and discredit witnesses who claim he and his brother formed death squads in the 1990s resulted in the fraud and bribery investigation that began in February last year.

The admitted payments made to witnesses during the investigation have made things only worse, the former president admitted.

According to Cepeda, Uribe dug himself an even deeper hole on Tuesday by making claims about what was allegedly said behind the court’s closed doors.

It is up to Magistrate Cesar Augusto Reyes, who is leading the investigation, to decide whether this is true, a cause to jail the former president or file yet another criminal charge.