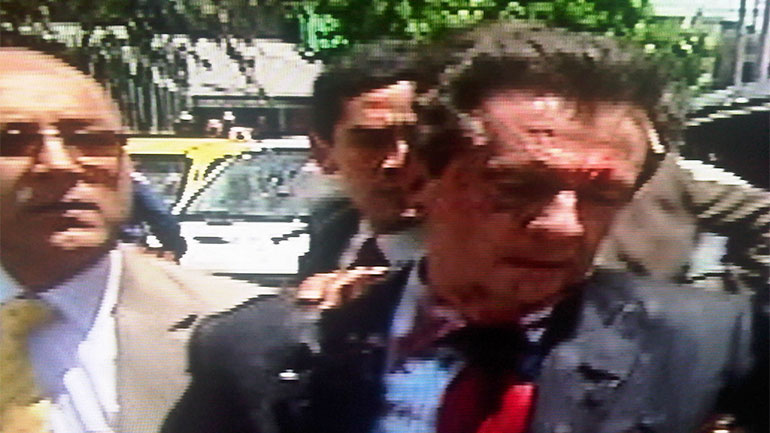 A gang leader and alleged ally of rebel group FARC was sentenced to 56 years in prison on Monday for a 2012 assassination attempt on former Interior Minister Fernando Londoño that killed two others and injured 27, including the politician.

According to the Prosecutor General’s Office, a judge in Bogota has found four men and one minor guilty of orchestrating the explosion in Bogota, which ended up killing the driver of the attacked car, Jose Ramirez Rodriguez, and the police escort Rosemberg Burbano Romes.

Cesar Augusto Ruiz Gomez a.k.a. “Bigotes”, who was 25 at the time of the attack, was the head of the”El Zuley” gang that operated in the southwestern province of Valle del Cauca, where the assassination attempt was plotted.

El Tiempo newspaper reported that the “El Zuley” gang is made up of common delinquents as well as members from the Teofilo Forero and 6th Fronts of the FARC guerrilla group.

The gang’s leader has been charged with aggravated homicide, attempted murder, criminal activity, terrorism, and the use of a minor to commit offences.

Three other accomplices, Ulises Castellanos a.k.a. “Apu,” Nelson Eduardo Rodriguez, a.k.a. “Chapo” and Fernando Collazos a.k.a. “Fifi,” are also being sentenced for their involvement in the terrorist act.

An underage accomplice known as “Carne”, has been sentenced by the judge to 7 years in a detention centre for putting the bomb under the former ministers car.

The child who is currently an inmate in a rehabilitation center in the city of Cali, was sentenced by the judge via a conference call, in which accounts were given of what happened, describing how the boy intercepted the vehicle transporting Londoño at a red traffic light, putting the detonated bomb on the car door, which then exploded.

The minor has been charged with engaging in conspiracy, aggravated homicide, and attempting to aggravate homicide through personal injury.

The Prosecutor General’s Office analysed more than 37,000 telephone numbers before establishing that the four accused men had purchased 12 cell phones in Bogota, which were used in the terrorist plot.

In 2014, FARC guerrilla members were arrested on suspicion of carrying out the attack.