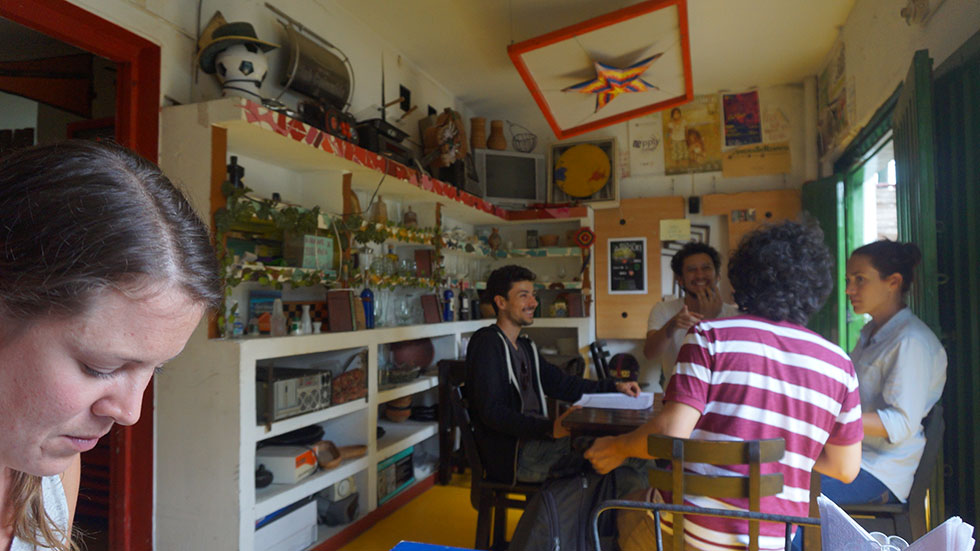 It’s easy finding typical food in Pereira, the unofficial capital of Colombia’s coffee region. What’s not so easy is finding a restaurant that takes the local cuisine beyond that.

Anyone who has visited Colombia has probably tasted the arepa, sancocho and beans.  These are the typical foods and flavors of the central corridor of the Andes Mountains.

This region is the most populated part of Colombia from Bogota to Medellin, and Pereira.  This zone is also the mainstay of food culture in Colombia too.  Which is why, travelers will benefit from the unique flavors offered by a restaurant named Latino, in Pereira.

At Latino, travelers can now discover a taste that is beyond typical delving into the lesser known flavors and cultures of the Pacific and Caribbean regions of Colombia.

You almost wouldn’t notice this place if you drove by.  Aside from the logo, which has been painted on the side of the building, it is very unassuming, simple and even a bit eccentric in its ambiance & decor.

The menu is a simple paper with about 8-10 options that periodically change, with the exception of a few local favorites and some special plates which are always in demand.

The ingredients are at times fresh picked from the recycled-tire herb planters out front, or purchased fresh depending on local availability.

Most importantly of all, the fusion of regional tastes and flavors go beyond the normal boundaries of what is considered typical Colombian food.

Heritage, travel, and the kitchen

Part of the uniqueness, owner Miguel Angel Trujillo says, comes from his grandmother, a Hungaro-German immigrant to the United States who married his Colombian grandfather.

Trujillo grew up eating food that he says “nobody in the coffee region would serve, it was our own distinct flavor,” describing the German food which his grandmother always cooked.

Having inherited this talent and unique taste, Trujillo went on to open his first restaurant in Pereira named Musci and featuring the flavors of his ancestry.  It wasn’t til after a life-crisis involving a divorce came to pass, that he really went in search of the -beyond typical- flavors of Colombia.

Divorced from his wife, his social group and even his restaurant, he sold everything and went to Ecuador where he began to study the different flavors of Latin America.

It was this year of study, seven different restaurants and seven different Latino cuisine types that inspired Miguel to return with a newly found passion, and the name of his new restaurant.  But there was something missing, he realized that, he didn’t truly know the Colombian kitchen.

“I knew the basics but I had never really spent the time to study, especially the mariscos, or seafood.  That was when I decided to go to the Pacific region.”

The Pacific kitchen of Colombia

As a child Trujillo lived up near the Caribbean port city of Cartagena and later Buenaventura on the Pacific Coast. His father was an adventurer who spent time out in the jungles of the Pacific and to this day has made his home in a small cabin for 30+ years. This time, he came back to learn the tastes of the Pacific that resonated with him from childhood.

Miguel started in Buenaventura and worked his way up the river into the heart of the Pacific region studying all the cultural cuisines, from the kitchens of the Afro-Colombian culture, to the indigenous cook-fires. There he made an astounding discovery about not just food, but also culture. 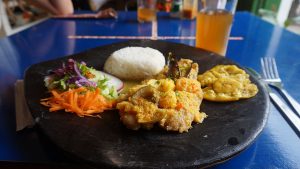 He began to realize that the kitchen doesn’t really have a border between Colombia, Peru and Ecuador. The difference was the kitchen of the ocean, versus the mountain, versus the river. This, says Trujillo, is due to something called “Pisotermico,” or the phenomena that drives food culture due to altitude, ingredient availability, regional culture and geography. 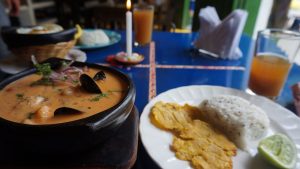 This is further explained by comparing the food eaten in mountain cities like Bogota, Quito and Lima, versus coastal cities like Buenaventura and Guayaquil in Ecuador where seafood and coconuts are readily available.

In the end, Trujillo returned from Choco with a newfound knowledge and appreciation for Colombian food and culture. He has a couple signature plates which relate to these studies that visitors should be aware of:  The Pirate Soup, which is actually six or seven different soups in one, with roots in the Caribbean, and Ecocado, a seafood plate famous for the coconut sauce used to flavor the food.

Essentially, the national plate for seafood in Peru, Ecuador and Colombia is the same.

“Colombian Ecocado is actually the most unique, but very complex and time-consuming to prepare.”

Now Trujillo is preparing food that is beyond typical, a journey of taste that takes us into regions of Colombia previously off-limits due to the conflict.  For the first time, locals and travelers alike, can appreciate a taste of Colombia which is both unique and flavorful.

Author Erin Donaldson is owner of The Pereira City Guide.