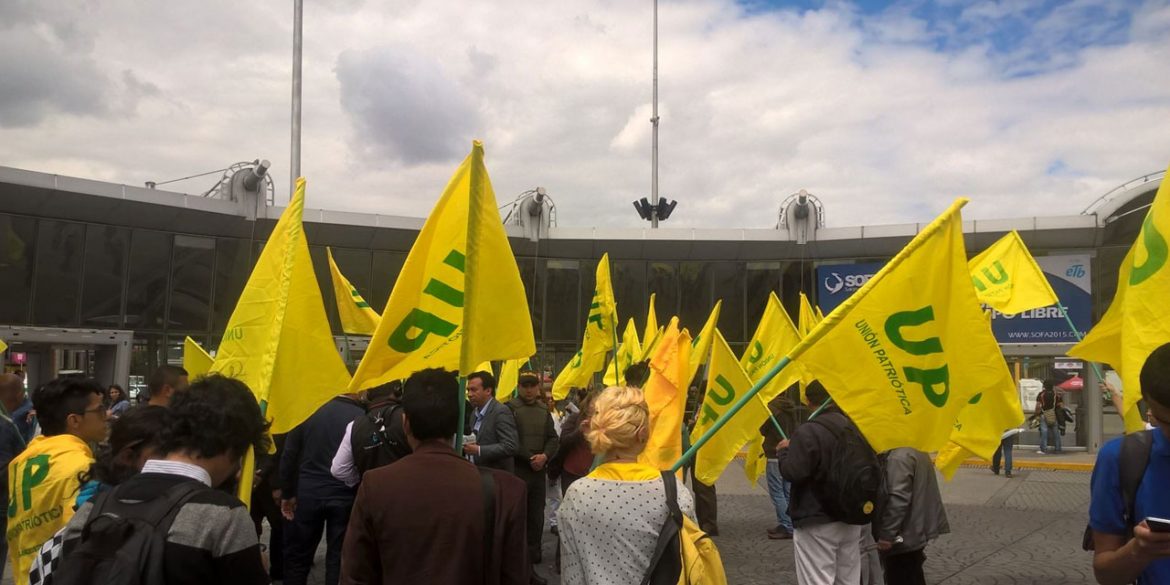 The Patriotic Union (UP) is a leftist political party from Colombia that was virtually exterminated by paramilitary groups and state forces in the 1980s and 1990s.

The party resurfaced in 2013 when the UP announced a political candidate for the first time in a decade after having their legal status revoked in 2002 for lack of members and supporters.

As part of a 1985 peace deal between the FARC and President Belisario Betancur, social democrats, members of the Colombian Communist Party (CCP), the FARC and other rebel groups came together to form a leftist party to oppose the two dominant political parties of the time, the Liberal Party and the Conservative Party.

This new opposition party would be known as the Patriotic Union.

The UP, which denounced using force or arms to influence Colombian citizens, sought voice within the government after the liberals and conservatives had shut out all opposition political groups from significant power for 16 years.

The UP prioritized issues such as land redistribution, better health care and education for the poor, greater access to an increasingly censored mass media, and the nationalization of businesses, banks, and transportation systems.

In 1986, the then openly communist political group did well in the election cycle. The UP gained 350 local council seats, 23 deputy positions in departmental assemblies, 9 seats in the House, 6 seats in the Senate and 4.6% of the presidential vote.  They performed better than any leftist group in Colombia’s history, and better than any other third party group in over a decade.

By 1987 however, a combination of drug dealers, right-wing paramilitary groups and members of the incumbent government and army began systematically assassinating and forcing the disappearances of leaders of the communist party.

Jaime Pardo, the UP’s presidential candidate in 1986, was assassinated in 1987 by a 14-year-old boy who was tied to a drug dealer from the Medellin Cartel.  By 1988, the UP reported that 500 of its members including Pardo and four congressmen had been assassinated.

Assassinations were rampant and continued throughout the 90’s and continued into the early 2000’s. One of the few surviving political leaders of the UP, Aida Avella, fled the country in 1995 after evading a third assassination attempt.  Others members of the party ultimately followed Avella’s lead and went into exile abroad. By the end of the 90’s the party had essentially become extinct.

In 2002, due to a failure to have enough active members or supporters–since so many had been assassinated or were in hiding–the government rescinded the party’s legal status taking away their ability to function in elections.

In 2013, Colombia’s Peace Commission looked into this action from 11 years prior, and decided to restore legal status to the UP after acknowledging the extraordinary circumstances of the party.

Shortly thereafter, the UP resurfaced on the political stage in Colombia, though not nearly with as much fervor as it once had in the 80’s, and they elected Avella to be their candidate for Colombia’s 2014 presidential race while in exile in Switzerland.

Though the principles that the party stands by remain similar to those they initially promoted, the UP no longer considers itself communist. After the 2018 elections, Avella returned to Congress as member of the “Decent List” of progressive opposition Senator Gustavo Petro.