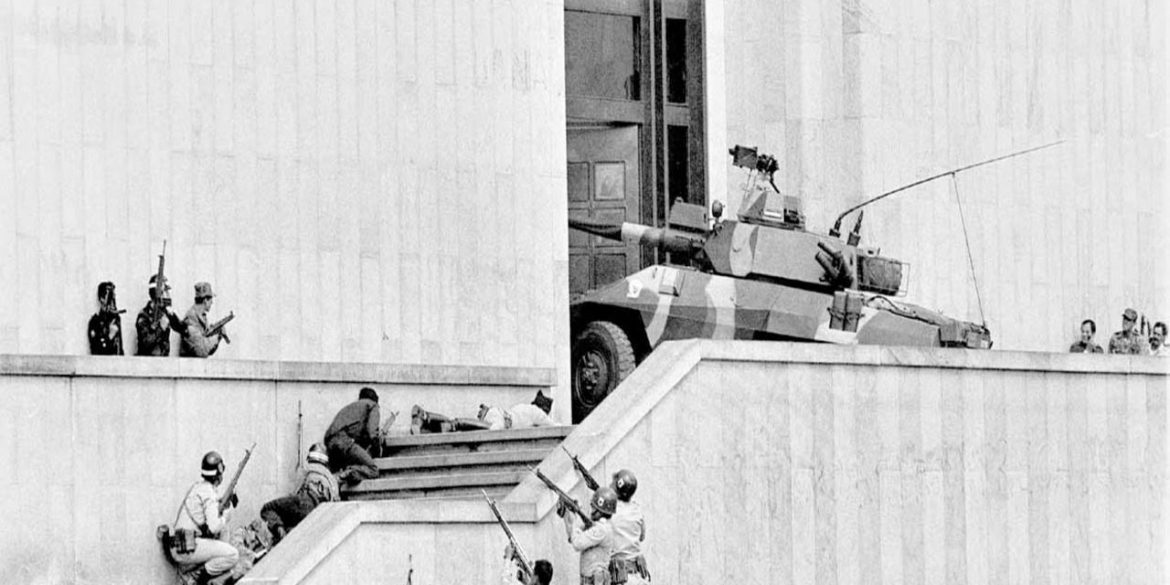 Colombia these days commemorates the Palace of Justice Siege, a tragic event that occurred over November 6 and 7 1985 in Bogota. A defining event in the history of the country and for which after so many years, there remain no culprits. The siege demonstrates a sorrowful reality and proves that the respect of Human Rights in Colombia remains in its infancy.

I evoke this column in memory of my mother as well as to promote the right to truth regarding one of the innumerable violent examples that prevail in Colombian recollection. I wish to emphasize that I have been waiting 24 years for clarity and justice on behalf of the State.

I express my gratitude for the attention of those interested in my testimony in relation to the innocent victims of violence — the Missing Persons of the Palace of Justice — and I hope that with this, I can at least enlighten you.

In 1985, the former guerrilla faction (M-19) took the Palace of Justice with the intention of carrying out a political trial against the then President of the Republic, Belisario Betancourt.

This guerrilla operation was supported by the drug traffickers of the 80s (Pablo Escobar and the Medellin Cartel) who wanted to prevent the institutionalization of extradition laws. They endorsed the siege in order to destroy files relating to the extradition processes that were kept inside the Palace.

This horrific and painful episode lasted some 27 hours, in which innocent people were killed, among them magistrates, judicial branch workers and visitors (culminating in more than 100 dead and several reported missing).

The commemoration was acknowledged by the mass media in the form of a request by the President of the Supreme Court of Justice, Alfonso Reyes Echandía asking former President Betancourt to not abandon the relatives of victims in their unfavourable luck and to appeal for a ceasefire as well as advance peace talks.

For 27 hours, 300 hostages were held in the Palace while waiting for an answer from the President, but the order never arrived and instead, on the second day, the Palace was stormed by the Army amid various dubious irregularities. For instance, there is videos evidence that visually proved Army personnel accompanying some hostages safely from the Palace to the “Casa del Florero”, a museum located nearby. Yet subsequently, in the hands of the Army, some of the hostages were “disappeared.”

Here is where this history became personal, for one of the disappeared persons was Gloria Anzola de Lanao, my mother.

Though when the event occurred I barely knew her for I was scarcely eight months old, my grief is profound. And although today I still do not know her whereabouts, the feeling inside me that one has for the person who brought you into the world and is your cause, provenience and life remains unalterable.

My mother was an attorney and a law professor, a kind, sweet, intelligent person and a mother filled with the love and happiness of the birth of her first son and unfortunately life’s path took her to the wrong place at the wrong time.

My mother entered the Palace as she always used to, in order to park her car, almost at the exact time as the Siege. After this tragedy, her car remained there but nothing more was ever known about her.

Currently, the culprits have not been punished, they walk free with their filthy conscience of the past, with the lack of presence and the apathy of the State to solve the case.

Threats have been made against witnesses who affirm that many of the missing people exited the palace alive and that by the power of the Army, they may have been brutally tortured and murdered. This demonstrates that there has been a gross manipulation of information and what is most tragic is that the grief of the holocaust has been ignored.

Hereby, I call on the State, evoking the Right and respect to Human Life, to demand Justice for all of the events which occurred in the Palace of Justice Siege. My mother, through her profession as an advocate sought Justice, and she gave justice professionally, the same Justice that for her case has been absent for more than two decades.

My mother believed in Colombia, as an advocate she practiced law ensuring the respect for Fundamental Rights and the Constitution to enrich coexistence.

As a professor she trained and nurtured competent professional students who have gone on to act in instituting Rights and Justice. She believed in the laws of Colombia, relied on the institutions – which are the same ones to which I am imploring the Truth today. She believed in the Justice of the State, and I as her son, after another whole year without truth demand for it. I expect the State to take action to consolidate the peace of it’s own citizens. I request that those responsible directly and indirectly will be punished, with the execution of Justice so that impunity does not prevail.

I call for the State to make itself worthy of respect, by casting the sword of Justice, impartial and even as the balance symbolizes. I implore Justice for Colombian society and for us as members of that society. I implore that the State commit to Justice as a developing country and I request the commitment of developed countries and the international organizations that work for the progress of the developing ones. Finally I request the universalizing of a better quality of life for all human beings.

I cannot be patriotic in the absence of truth. I want to believe in Colombia and in its Institutions and feel myself strong enough to uphold our international image. I wish that each time I sing the Anthem of Colombia, the “Gloria Inmarcesible”(Unfading Glory), I am sure that my mother Gloria Isabel Anzola de Lanao, did not fade because the State did not let that happen, that they are stepping forwards on reliance and institutionalization.

Mother, I cannot tell you this face to face, but you do not know how much I miss and love you and I wish to demonstrate that your life and your inspirations were not in vain, that your intentions will prosper with Justice. I prefer to believe that this was a sacrifice for Colombia, our people and for me.

I want Colombia to let me bury my mother, give her the last sacrament and to allow me a place where I can pray and entrust her and at the very least let me have somewhere to leave her a flower.

Thank you for your understanding and for commemorating with me, this important date for Colombia.