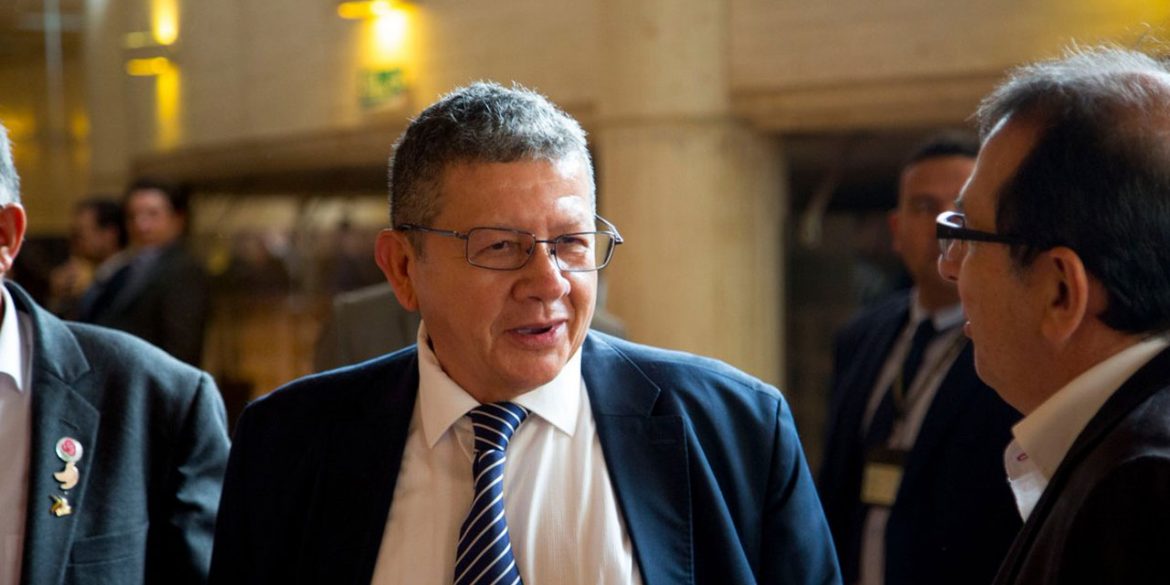 Jorge Torres, a.k.a. “Pablo Catatumbo,” is a senator of the FARC, the former guerrilla group that demobilized and disarmed in 2017.

Catatumbo was born in 1953 in Colombia’s third largest city, Cali, Valle del Cauca, near the traditional heartland of the FARC rebels in Cauca and Tolima.

Little is known about his early years and adolescence, but reports indicate he entered university sometime in the 1970s, where he joined the leftist guerrilla movement M-19. During his youth he was said to have developed a “fanatical obsession with history and the ideological texts of independence hero Simon Bolivar.”

In the 1980s, as M-19 started kidnapping drug traffickers and their children for ransom, Catatumbo was captured and held hostage by Pablo Escobar’s “Death to Kidnappers” group. Escobar, the most notorious drug lord in Colombia’s history, allegedly persuaded Catatumbo to stop kidnapping associates of his Medellin Cartel.

According to former Medellin mayor Alonso Salazar, the author of the book “La parabola de Pablo,” Escobar, Catatumbo and other prominent members of the M-19 began a “friendship.”

According to the Colombian weekly Semana, this relation could have culminated in the so-called Palace of Justice Siege in 1985, when a dozen M-19 guerrillas stormed Bogota’s Palace of Justice demanding for a trial against then-President Belasario Betancur.

The siege ended in a bloodbath when Colombian police stormed the building, leading to the death of some 140 people, with another 11, most of them restaurant workers, disappearing without a trace.

The exact circumstances regarding the incident remain unclear, but rumors have surfaced Escobar and the M-19 planned the siege together in order to get rid of the drug lord’s enemies in the High Court.

Sometime after the demobilization of the M-19 in 1990, Catatumbo joined the FARC.

In the late 1990s, he became involved with the hard fight against the right-wing paramilitary AUC’s Calima and Pacifico Blocs, who had the outspoken goal of “purging” Colombia’s southwest from FARC guerrillas and their sympathizers.

According to Verdad Abierta, a website monitoring the armed conflict, the FARC’s Western Bloc withheld the onslaught of the paramilitaries and grew considerably under the leadership of Catatumbo.

“In 1999 the Calima Bloc entered to commit massacres, executions, tortures and violations in the [Valle del Cauca]. Their criminal actions, open and scandalous were not for a single moment repelled by the army or the police, nor were they denounced by local and regional political powers. It was the men and women of the [FARC’s] Mobile Bloc Arturo Ruiz, The Central Command of the West […] who effectively confronted the fascist troops, leading to their complete defeat and the failure of their project in this part of the country,” said Catatumbo in a 2012 interview.

According to newspaper El Tiempo, several relatives of Catatumbo were murdered on orders from the late Carlos Castaño, one of the founders and former leader of paramilitary umbrella organization AUC and a violent opponent of the FARC.

The FARC commander was elected member of the FARC’s seven-man ruling body, the Secretariat, in 2008 after the FARC founder, “Manuel Marulanda,” died a natural death in the jungles of southeastern Colombia.

Catatumbo is said to have “an extensive military training” and is believed to have masterminded numerous attacks against the army and police in the Valle del Cauca, Cauca, Nariño and Choco departments. He is held responsible for sabotaging public roads, infrastructure, oil installations and for planning and executing several bank robberies.

Ideologically, Catatumbo is considered a political and military hardliner. When FARC’s main military strategist, “Mono Jojoy,” was killed by the Colombian Air Force in 2010, Catatumbo was said to have inherited the “hard line” of the FARC’s leadership.

Catatumbo has been an outspoken proponent of kidnappings for financial reasons. In 2012, he seemingly clashed with fellow FARC commander Ivan Marquez over the FARC’s decision to end kidnappings of civilians. Catatumbo said to weekly Semana that “our war of resistance, however much it saddens me to say it, requires finances.”

According to various sources, the rebel leader was based in the southwestern Valle del Cauca department, where he was in charge of the fighting divisions of the Western Bloc. In total, some 1,800 armed guerrilla fighters, organized into six Fronts and five Mobile Columns, were believed to be under Catatumbo’s command.

Catatumbo’s jurisdiction covered some of the most extensive coca crowing regions of Colombia. According to the U.S. State Department, Catatumbo “participated in setting and implementing the FARC’s cocaine policies directing and controlling (i) the production, manufacture, and distribution of hundreds of tons of cocaine to the United States and the world; (ii) the “taxation” of the drug trade in Colombia to raise funds for the FARC; and, (iii) the murder of hundreds of people who violated or interfered with the FARC’s cocaine policies.”

As a result, the government of the United States offered $2,5 million dollars for information leading up to his capture or death.

In April 2013, Catatumbo traveled to Havana to join fellow-guerrilla leaders who were in Cuba meeting with the government to negotiate peace.

Following the ratification of the peace deal between the FARC and the Colombian government on November 30, 2016, Catatumbo demobilized and disarmed. He became one of the former guerrilla commanders who were elected by the group’s base to become a member of Congress.

Since August 2018, he is part of the FARC’s Senate faction.