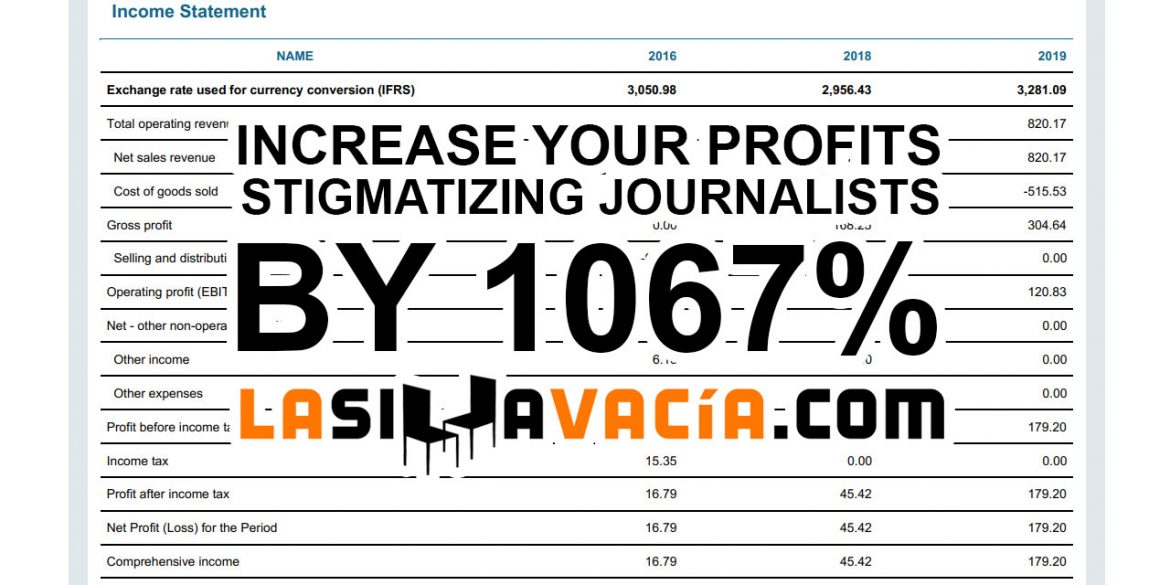 While Leon’s website, La Silla Vacia, had a contract with the state and she herself did an interview with former President Alvaro Uribe with the evident purpose of diverting attention from an online series revealing the piles of evidence of Uribe’s links to the Medellin Cartel and paramilitary organization AUC, her website labels colleagues exposing mafia infiltration in politics as “openly anti-uribista activists.”

Revealing criminal activity by people in power is not political activism, it is called journalism. Politicizing this is as absurd as legitimizing crime.

All aforementioned facts violate the basic principles and ethics of journalism and should never meet the minimum ethical standard demanded by FLIP from its assembly members.

The very mafia legitimized by Leon and her website killed a friend of mine and has practically turned my city of Medellin into a mass grave nobody dares to report on.

The last thing FLIP needs is to provide a home to puppets of the Colombian mafia or anyone who threatens or does not contribute to a free press, peace and democracy in general.

Reporters face greater levels of hostility from a citizenry whose approval of the media has deteriorated, a trend I understand given the lack of editorial independence demonstrated, for example, by Leon and her minions.

I appreciate the employees of FLIP who without exception have been dedicated to honorable work and I admire the colleagues of the League Against Silence whose work has been exemplary and inspiring.

I will not conform to a perpetual failure to defend the freedom of the press even though the FLIP receives I do not know how much money from foreign governments and institutions.

I prefer my freedoms as a journalist to be defended by my neighbors, my friends, my colleagues, my community and the international defenders of the free press, without the FLIP.

As my first act of independently promoting freedom of the press, I have updated Leon’s English-language Wikipedia page, including the attacks on our colleagues, the state contract, the “legal investments” that got her into the Panama Papers, etc.

I will also ask my community to give newspaper La Patria of which you are the editor a Wikipedia page for free and not to forget the newspaper’s support for the fascist dictatorship in Spain and more recently the stigmatization of social leaders in Colombia.

We will see later what initiatives emerge from independent journalism and the Colombian citizenry to effectively promote a free press, democracy and peace.

In the meantime, I urge the FLIP assembly to make a profound self-reflection about whether it fulfills the expected purposes of a foundation for the freedom of the press, the ethical standards it demands from its members and the media, and its raison d’être beyond the collection and distribution of money from foreign governments and institutions.