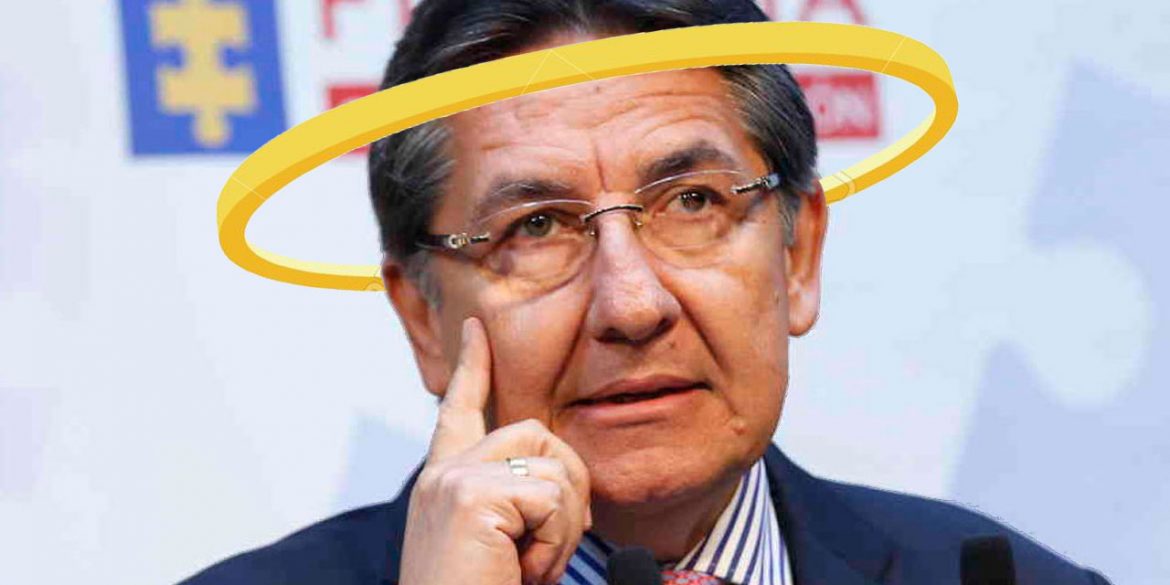 Homicide investigations related to Odebrecht’s bribery practices in Colombia have all the hallmarks of a “whodunnit” murder mystery novel, but it’s real and could cost the head of Colombia’s chief prosecutor.

The death of engineer-turned-whistleblower Jorge Enrique Pizano last week, and the suspicious death of his son Alejandro, three days later, are the latest and most fatal twists in a series of misfortunes that have befallen prosecutors, judges and auditors who have found themselves at odds with weight of the Odebrecht corruption scandals.

The most recent father-and-son deaths have fueled speculation that Jorge Pizano was a marked-man after “he made people feel uncomfortable,” for bringing to light the vast number of dubious payouts and bogus contracts that made up the cycle of bribery involving President Ivan Duque and his predecessor, former President Juan Manuel Santos.

It is the kind of corruption that helped the Brazilian construction giant Odebrecht win the contract for Colombia’s ambitious “Ruta del Sol” highway infrastructure project.

If Pizano Sr. made himself a target for uncovering Odebrecht’s vast nexus of corruption here in Colombia, it’s possible that others who dared get in the way of the powerful and well-connected enriching themselves also faced the same fate.

Or, the string of deaths and serious injuries could all be a series of random and unconnected coincidences.

What follows is a list of people who locked horns with Odebrecht and, for one reason or another, never got to see their confrontation through to the end.

Deaths and near-deaths turn corruption scandal into a thriller

The deaths of the two members of the Pizano family are not the first.

In January 2017, Brazilian Supreme Court Justice Teori Zavascki died in a plane crash just outside of Rio de Janeiro.  The judge was instrumental in “Operation Car Wash,” the criminal investigation that triggered the corruption scandal involving Odebrecht and other government contractors, Brazil’s state oil giant Petrobras, and even led to former President Luis Ignacio Da Silva being sent to jail.

Last month, a prosecutor with Colombia’s Prosecutor General’s Office was nearly killed in a car crash while on vacation with his family in Santiago, Chile. Amparo Ceron was leading the investigation into the Odebrecht bribery scandal, and had implicated or was investigating 78 businessmen and Colombian politicians when the accident occurred.

She had showed herself to be a successful prosecutor, having already successfully obtained five convictions, and the indictment of 17 others, and had petitioned the Supreme Court to investigate 10 congressmen for accepting bribes from Odebrecht officials in exchange for awarding contracts and other favors.

The prosecutor was in the front passenger seat of a car being driven by her niece in October near the Chilean capital, when the car was involved in a serious collision. No one was killed, but Ceron sustained serious injuries and spent a month in an intensive-care unit in the Chilean capital.

A spokesperson for the Prosecutor General’s Office said the prosecutor was recently released from hospital, but did not indicate whether Ceron would be returning to work.

The fall of a father and son

Pizano must have sensed he would be making enemies with his forthrightness; in August of this year he gave a tell-all interview with the news network Canal 1, and in that interview he revealed an audio recording of a conversation between he and Martinez, dating back to mid-2015, a year before Martinez was appointed Prosecutor General.

“I’m doing this because there is a plot against my personal integrity,” Pizano said in the interview. “My work has affected a lot of people. It’s been uncomfortable for those who have by now been convicted for irregular contracts for the Ruta del Sol.”

He also said he reported his findings of irregular payments and contracts relating to Ruta del Sol to his superiors as far back as 2013. At the time, Martinez was legal counsel for Grupo Aval, Odebrecht’s local partner in a consortium working on the highway project, and he was one of the superiors that Pizano reported to.

Martinez has categorically denied knowing of the bribery practices and irregular contracts. But was forced to admit to having known about the dodgy practices in 2015 on Thursday.

‘Who gives a shit’ about corruption in Colombia?

In their secretly recorded conversation, Martinez can be heard questioning Pizano’s finding and his motivations for bringing them forward.

In an expletive-laden diatribe, Colombia’s top prosecutor insulted Pizano personally on a number of occasions, and wonders out loud if anyone “gives a shit” if Odebrecht was bribing officials connected to the roadway project.

Now you’re in it, and the only idiot who is going to get burned is you, asshole, hahaha.

The late Pizano Sr. also said in the interview that Sarmiento was made aware of the corruption at the same time that he sent his findings to Martinez.

Grupo Aval has said that it was a victim of Odebrecht’s dirty business practices, and that it was unaware of any bribes “before December 21, 2016” when the US Justice department revealed the corruption.

Pizano had agreed to the do the interview and hand over the audio recording on the condition that Canal 1 wait until after he had fled the country into protective custody, or died, to air the exposé.

The channel didn’t have to wait long.

Last Thursday, Pizano’s Sr.’s wife found him lying on the bathroom floor in his Bogota home, having trouble breathing. She called an ambulance, but he died on the way to the hospital. Though he was middle aged and battling pancreatic cancer, his sudden death by apparent heart attack came as a surprise to everyone who knew him.

Fearing for his life, Pizano was had been negotiating with US and Colombian officials about traveling to the US in order to receive witness protection. These talks took place last Wednesday, November 7, the day before he died.

Both the US Embassy in Bogota and the FBI declined to comment, according to US television network Bloomberg.

When Pizano Jr. died after drinking from a bottle of water that had been poisoned with cyanide, prosecutors became suspicious about Pizano Sr’s death and opened a double homicide investigation.

Calls for Martinez to resign 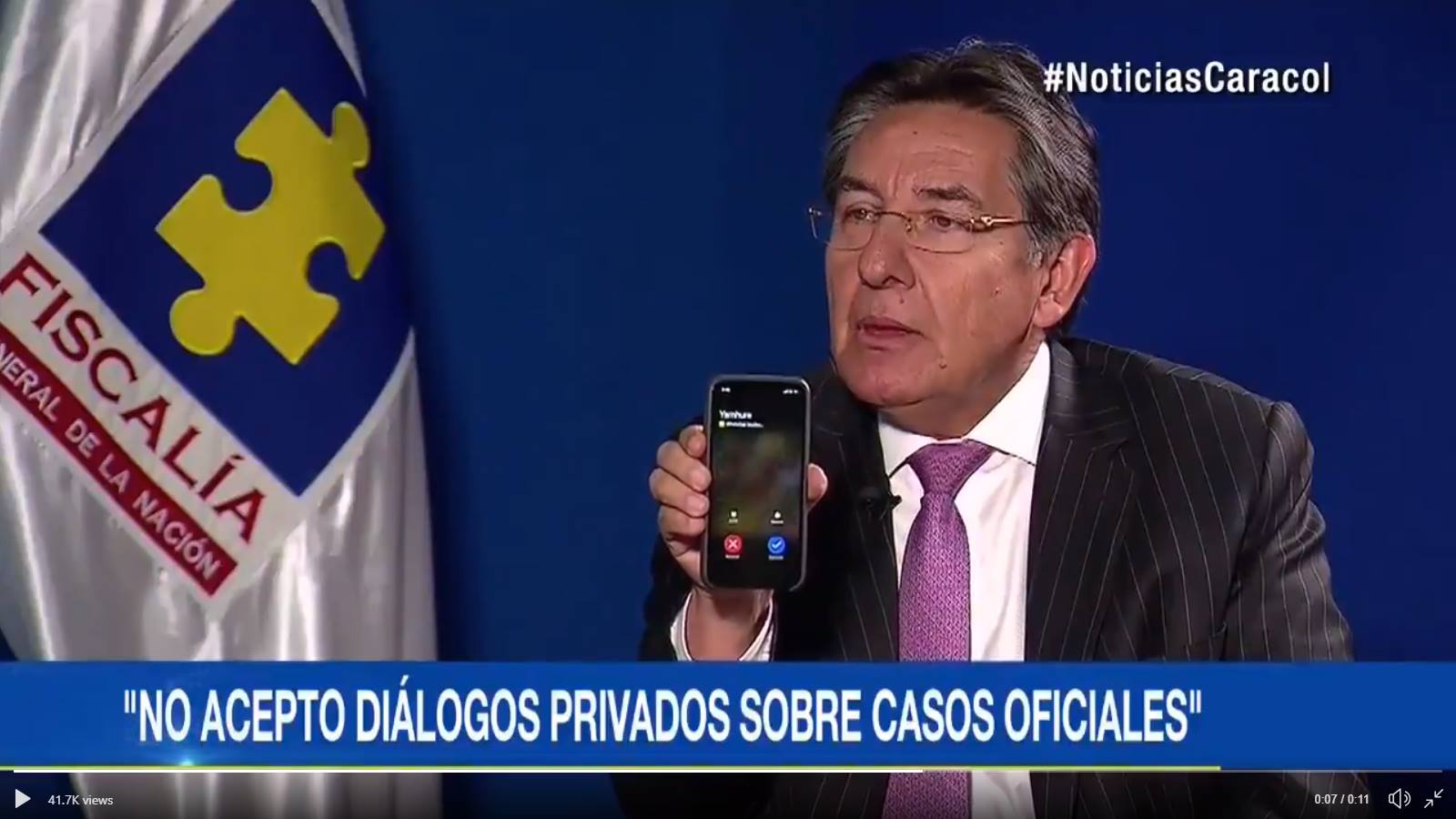 When Martinez was holding up his personal phone on national television in an attempt to deny he’s a crook on Wednesday, he received a call from his contact Yamhure. Ernesto Yamhure is a far-right pundit, a former speech writer of late paramilitary commander Carlos Castaño and an ally of former President Alvaro Uribe. Martinez’ office is supposedly investigating the guy.

Martinez has survived calls to resign so far, despite his key role in Odebrecht’s businesses in Colombia, accusations of “categorically meddling with” and even “intimidating” Colombia’s war crimes tribunal, and the arrest of his hand-picked anti-corruption chief for bribing Supreme Court judges.

The revealed audio, however, puts Martinez in the middle of the corruption scandal and proves he both lied to the public and neglected to investigate the bribery he was made aware about after he became chief prosecutor in mid-2016.

Leftist opposition Senator Jorge Robledo, who has been calling for Martinez’ resignation for years, reiterated the urgency to remove the apparently corrupt Martinez from his post.

This is a man who moves through corruption like a fish in water, [and] who seems to considered the actions denounced by Mr. Pizano a joke.

Robledo, who has long been one of Colombia’s most vocal anti-corruption advocates in Congress, was supported by centrist opposition Senator Angela Maria Robledo, who called on Martinez to resign “to return some credibility to Colombia’s precarious justice system.”

Senator Gustavo Petro, the anti-corruption advocate who took on Duque in the presidential elections earlier this year, called on the Supreme Court to remove the Odebrecht case from Martinez’ office and independently investigate the company’s bribery practices and the alleged murders of the two members of the Pizano family.

The Supreme Court of Justice should proceed to choose an ad hoc prosecutor for the process, so that, independent of the Prosecutor’s Office, Colombian society can be given the necessary confidence that there is a serious investigation.