Independent electoral observers raised the alarm last week over a sharp increase in municipalities with elevated risk for fraud ahead of and during Colombia’s upcoming elections. Particularly the senate elections are a cause for concern, observers say.

The Electoral Observation Mission (Mision de Obervacion Electoral – MOE) reported that almost 400 of the country’s more than 1,100 municipalities are at medium to extremely high risk for either electoral fraud or voter-directed violence during either the congressional or presidential elections, held respectively in March and May.

According to the MOE, indications that corrupt political factions plan to commit electoral fraud have increased significantly for the senate elections, while the electoral fraud risk for the House of Representatives election has dropped slightly.

The number of municipalities at risk because of a lack of competence of electoral officials has also dropped significantly for House elections, said the MOE, from 694 in 2010 to 320 this year.

Based on the realities of previous election cycles, the observers argue that an exceptionally high voter registration indicates that potential voters may receive some kind of illegal endorsement to vote, while a lower than average turnout may indicate voters are actively prevented from carrying out their electoral duty.

Number of municipalities at risk for fraud

Risk for fraud in both House and Senate elections 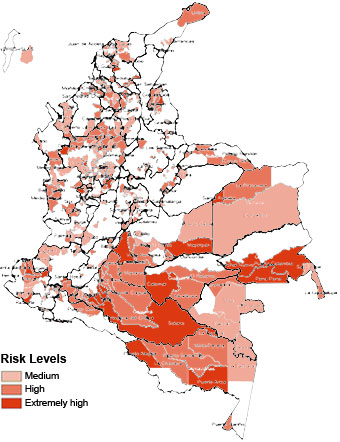 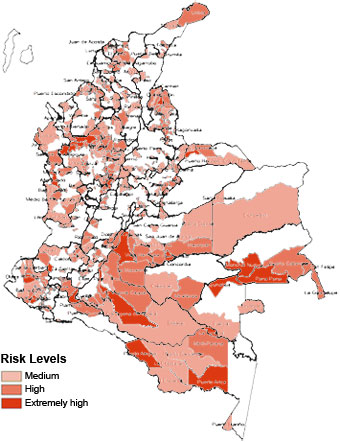 The observers registered a strongly elevated risk for electoral fraud in the southeast of the country, where the state traditionally lacks a strong presence.

In the case of the House elections, the observers also alerted for suspicious voter registration behavior in the north of the Antioquia state, along the Pacific coast and along the border with Venezuela, also areas where unofficial armed groups exert a high level of control.

For the presidential elections, the MOE registered particularly suspicious voter registration behavior in the east and southeast of Colombia and in the northwestern state of Antioquia.

According to the MOE, the departments with the highest risk of electoral fraud coincide with the ones where local elites have traditionally exercised strong control over their region’s politics. The observers mentioned explicitly the departments of Antioquia, Nariño, Boyaca, Norte de Santander and Cordoba.

The observers created a database indicating where violence is most likely to disturb the electoral cycle in March. This was determined using a number of variables including the presence of illegal armed groups, military presence, recent combat between armed forces and illegal armed groups, forced displacement, and cases in which the freedom of speech was violated.

The number of municipalities where violence could impede voters’ efforts to exercise their political rights went down 7% compared to 2010. This drop was particularly visible in municipalities with either a high or extremely high risk of violent intervention.

The risks for violence are particularly high along the Pacific coast, in the north of the Antioquia department, in the southern jungle states along the Ecuadorian border and along the Venezuelan border, where rebel groups and drug trafficking organizations have a strong influence.

The MOE also released alarming statistics about possible acts of political violence like attacks on candidates or campaign volunteers. According to the observers, the number of municipalities at risk for political violence went up 172%, from 48 in 2010 to 131 this year.

Colombia’s congressional elections will be held on March 9, while the first round of the presidential election is scheduled for May 25.