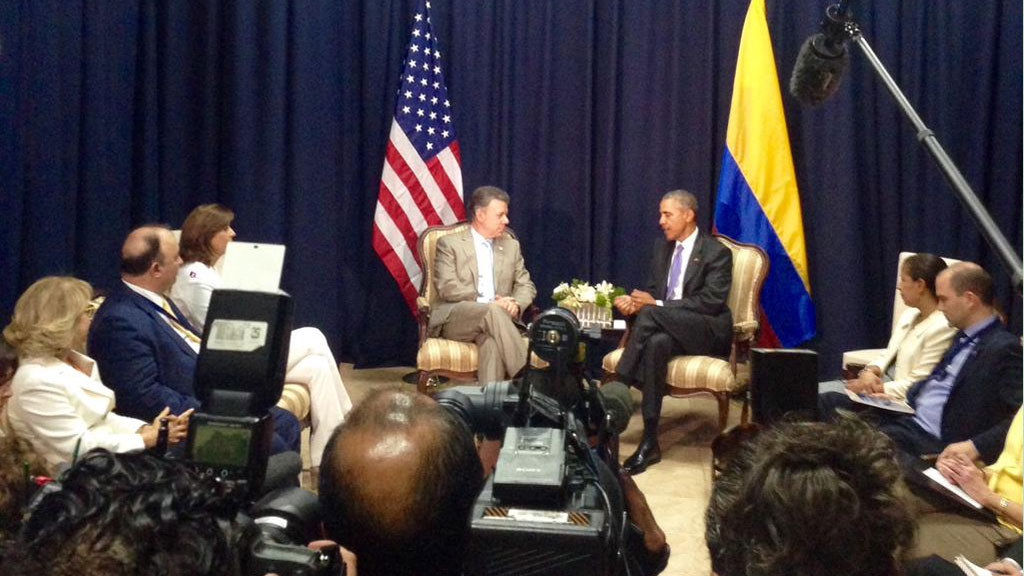 Obama shared his impression of distinct “progress” in the negotiations that have been ongoing in Havana between the Colombian government and guerrilla group the FARC since November 2012, according to Hispanic spokeswoman of the White House, Katherine Vargas.

Vargas said the US leader reiterated his “support” to resolve the remaining “challenges” in the process, including the issue of victims’ rights and how to approach the “end of the conflict.”

“Obama celebrated the efforts of Colombia to achieve peace and reiterated his support for us,” said President Santos on Twitter.

Obama also reportedly stressed that his recent appointment of US Special Envoy Bernie Aronson to the peace process in Colombia symbolizes the “shared hope” that a “stable and lasting peace” is achieved.

The Special Envoy was appointed by Obama on February 20, and in the past almost two months has spoken personally on several occasions with the Colombian government, the official peace delegation in Cuba and the guerrilla negotiators.

The meeting was also a key opportunity to begin the designing of a road map to plan the transferal of US support from that of aiding a conflict, to the creation of a durable and sustainable post-conflict Colombia.

With the US an unconditional ally of the peace talks, Saturday gave Obama the rare chance to discuss in person with Santos the progress that has been achieved in the almost three years of talks, so he can determine what further US action could be taken to encourage their ultimate success.

Obama and Santos also discussed during the meeting various regional issues and initiatives to “expand prosperity, security and democracy in the Americas,” according to the White House.

According to Colombian radio station Blu Radio, both leaders will try to get support for the peace talks into the Summit’s final statement.

Colombia has long been Washington’s staunchest ally in the region and received billions of dollars in the first decade of this century to combat drug trafficking and leftist rebel groups involved in this drug trade.