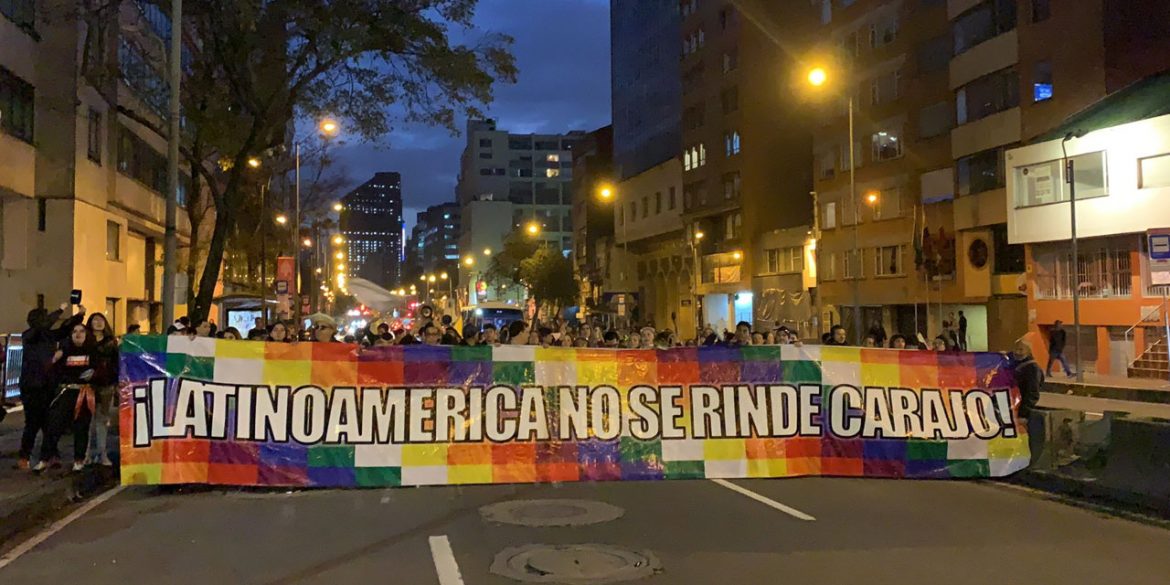 Fed up with violent repression, peaceful anti-government protesters massively took to the streets in Bogota on Saturday, occupied the capital’s central square and kept President Ivan Duque awake all night.

The nightly protests seemed the death blow to Duque’s three-day attempt to violently repress the protests and ignore the people’s demands.

Things in Chapinero have turned into less of protest and more of a party, much different tone than last night with Bogotá’s curfew #23Nov #cacerolazo pic.twitter.com/01wbdcq9Rm

Tens of thousands of protesters took both the central Bolivar Square and the Hippies’ Square in Chapinero with a vengeance.

On Friday, police violently repressed protests at the central square, Mayor Enrique Peñalosa issued a curfew and the Bogota Police Department treated the city’s residents to a night of state-sponsored terror as police and vandal associates vandalized neighborhoods and terrorized its residents.

When Bogotanos found out at dawn that the police had allegedly been paying vandals to sow terror, the plot backfired and again the people massively went downtown.

When the loathed ESMAD anti-riot unit shot the 18-year-old Dylan Cruz into a coma, the floodgates opened for real and police was forced to back away.

Droves of Bogotanos took their pots and pans to the streets for one of the loudest protests in Colombian history.

To make it crystal clear who was boss, thousands more gathered before Duque’s private residence in Usaquen, chanting “murderer” at the “sub-president” and “paramilitary” at Duque’s far-right political patron, former President Alvaro Uribe.

After three days of repression, the inhabitants of Colombia’s capital made it clear they were going to be heard and not a million cops were going to stop them.

We are not afraid #23Nov pic.twitter.com/LtZ5ezmEMV

Duque in the corner

As thousands of people gathered in front of his home, Duque announced he would begin talks with newly elected local politicians on Sunday to negotiate an end to the strike.

Meanwhile, strike organizers and citizens began organizing more protests for Sunday to make sure the president stays in his corner.

With a second day of national strikes planned for Monday, Duque can expect to be presented the bill for 15 months of misrule and three days of repression when he meets with empowered labor unions.