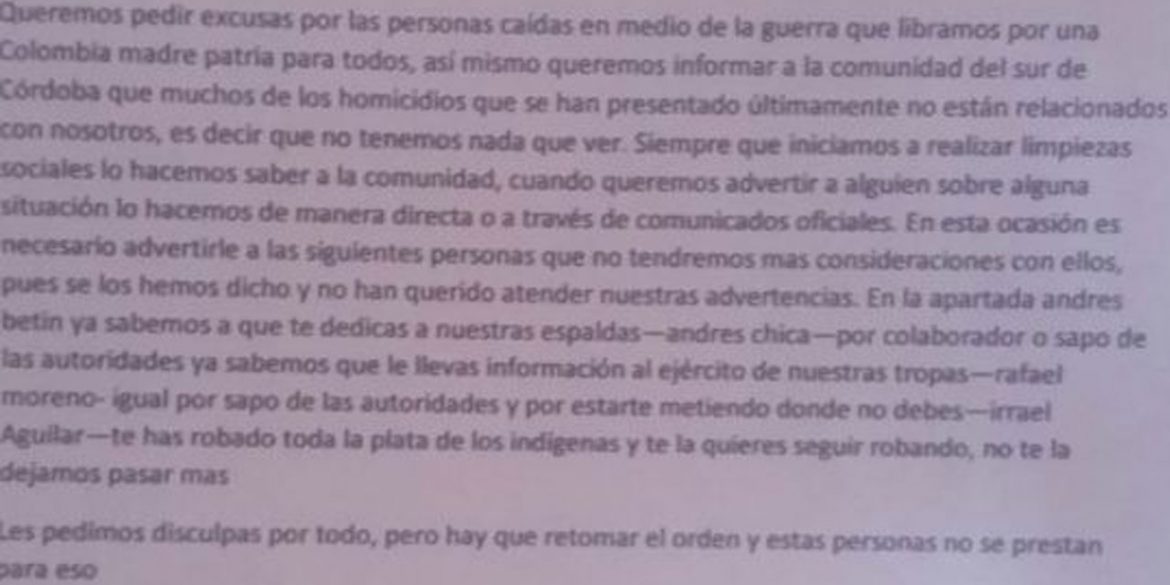 A pamphlet that appeared in Cordoba, a province in northern Colombia, threatened community leaders who are connected to a woman whose murder on Friday sparked a wave on indignation.

In the death threat signed by the Gaitanista Self-Defense Forces of Colombia (AGC), the group said it had been falsely accused of murders that have been taken place in the region.

The death threat that preceded the murder of social leader Maria Del Pilar Hurtado and two others was undersigned by the same group.

Maria del Pilar Hurtado, the victims representative who fled west Colombia only to get murdered in the north

We want to inform the community in southern Cordoba that many of the homicides that have occurred here are not attributable to us, we have nothing to do with them.

The threat proceeded to list the names of those “who will receive a cordial farewell.”

Included in the list is Andres Chica, the local human rights defender who revealed that the homicides in the town of Tierralta happened amid a land conflict between the community of Del Pilar and the mayor.

The pamphlet accuses Chica of “collaborating with the army to expose information about our troops.”

As director of the Cordobexia Foundation, Chica was one of the first people to denounce Del Pilar’s killing.

Chica told the press that he witnessed paramilitaries riding alongside Colombian riot police weeks before Del Pilar’s murder. He said on Sunday that he had already left the town after receiving death threats on his phone.

“What they tell me is that they are going to assassinate me and that is what hurts me most because it is an imminent risk,” Chica said in a video on social media.

I deeply regret having to leave, but our process of vindication of the peasant and poor communities continues. We will continue to talk about the same thing.

Also included in the paramilitary’s hit list is journalist Rafael Moreno, for “being a liar about things he doesn’t know about.” Moreno has been actively investigating the fraudulent business dealings of Tierralta Mayor Fabio Otero, according to his Facebook page.

Two indigenous rights activists were marked for death in the pamphlet for “robbing money from indigenous peoples and working behind our backs.”

Threats against social leaders have increased throughout Colombia since 2016 when the FARC guerrilla group signed a peace deal with the government of former President Juan Manuel Santos.

More than 120 activists were assassinated in Colombia in 2018, and preliminary figures indicate that even more may be killed this year.

Since Del Pilar’s killing on Friday, three more community leaders have been killed, according to the weekly paper Semana.