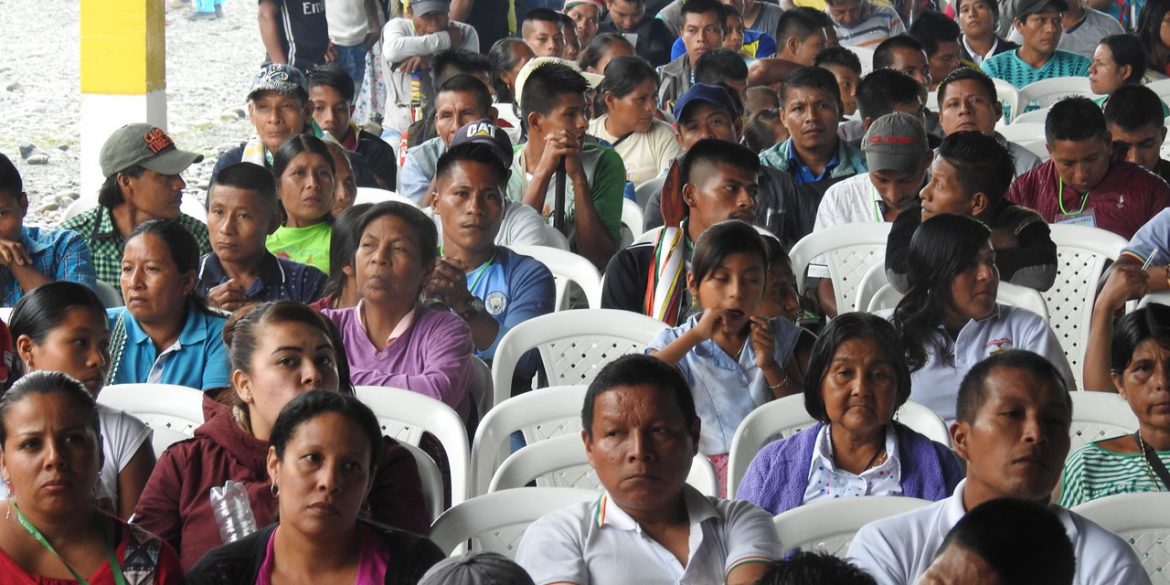 Members of the Awa people during a general assembly (Image: UNIPA)
News

Four members of the native Colombian Awa people have been murdered in southwest Colombia over the past week as the community is caught in the crossfire of a drug-fueled turf war.

Two women of the people that inhabit the southwest of the troubled Nariño province disappeared last week and were found murdered on Friday, according to UNIPA, the Awa’s association of elders.

Exterminating the Awa people, one by one

On the same day, another member of the community was assassinated by two men on a motorcycle.

Two day before, an elder of the native Colombian community received a text message in which FARC dissident group “Frente Oliver Sinisterra” (FOS) said that he and five other Awa leaders had been declared a “military objective.”

As we have stated publicly in multiple communiques and pronouncements, pamphlets from multiple illegal armed actors appeared in May in which Awa leaders were directly threatened. Today there are more than 73 leaders who have been threatened and are facing extreme risk against their lives. This adds to the 29 murders between August 2016 to date, demonstrating the extermination to which we have been subjected.

Awa people under pressure from both the law and the outlaws

The Awa people are not just targeted by illegal armed groups, but their leaders claim community members have also been subjected to arbitrary detentions.

While the community mobilized on Thursday to search for the disappeared Rocia Garcia and Leidy Jackeline Burgos, community leader Edisonson Morenao and his father Miguel were arrested by prosecution officials.

While it is unclear why the Native Colombian leaders were arrested, their problems with illegal armed groups are likely related with the people’s defense of the environment in their territories and opposition to illegal mining and the cultivation of coca, the base ingredient for cocaine.

The Awa’s ancestral territories, particularly those on the Ecuadorean border, are of major strategic importance for drug traffickers and coveted by illegal miners who want to steal the community’s gold and silver deposits.

Mainly due to chronic state abandonment and neglect in their part of Colombia, the Awa people have been among the communities that have been hit hardest by the country’s armed conflict and illicit drug trade.