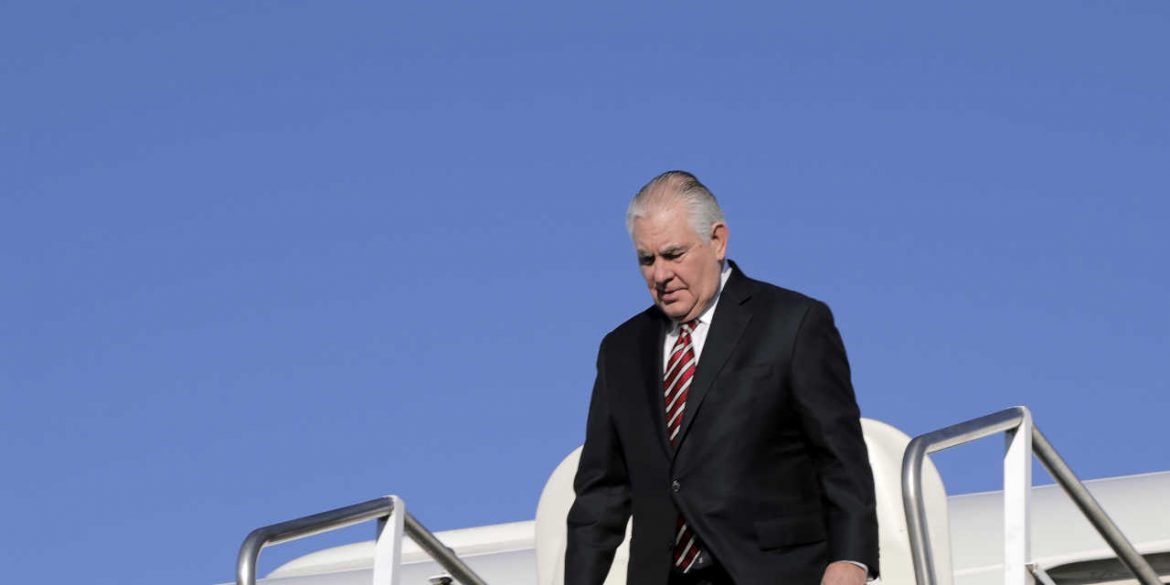 Mixed signals ahead of Tillerson’s trip to Colombia

While officials in both countries say Colombia’s peace process tops the agenda for US Secretary of State Rex Tillerson’s upcoming brief trip to Bogota, there are major differences of opinion on how to accomplish that.

In remarks Thursday in advance of his six-country tour of Latin America, Tillerson focused on reducing cocaine production as the key to securing Colombia’s peace.

“We continue to support [Colombia’s] sustainable peace, but challenges do remain. Colombia is the world’s largest producer of cocaine—the source of 92% of the cocaine seized in the United States,” Tillerson said in a Texas speech outlining his goals for this week’s trip.

“The most immediate threat to our hemisphere are transnational criminal organizations,” he added, pointing to the need for a wide array of “law enforcement…police and military forces” to “dismantle” the drug-runners.

Tillerson tempered his war-on-drugs rhetoric with an acknowledgement of the need “to identify alternative cash crops to support rural Colombian farmers.”

But he made it clear that the topic of cocaine was not only the most important issue for the US but also one where there are significant differences with Colombia.

“We keep a very open and frank dialogue with the Government of Colombia,” Tillerson said. The word “frank,” of course, is diplomatese for “we really don’t agree on how to do this.”

While Tillerson did mention the need for alternative cash  crops for coca farmers, he said nothing suggesting the US was backing off its pressure for massive forced eradication in coca fields.

Forced eradication, opposed both by President Juan Manuel Santos and the United Nations, would yield short-term reductions in cocaine production without addressing the underlying violence, lack of infrastructure  and instability in much of Colombia’s countryside.

Tillerson will meet with Santos and other top Colombian officials on Tuesday.

There is also significant uncertainty about the direction both countries will take this year.

In Colombia, a new president will take office mid-year. And while public opinion polls show majority support for those candidates endorsing the peace agreement, a significant minority endorses candidates who want to reject the pact.

In the US, not only is President Donald Trump’s attention riveted on investigations that threaten to undermine his hold on office, but the State Department has been drained of senior diplomats with Latin American experience and is operating with numerous vacancies in key positions.

Trump nominated career diplomat Joseph Macmanus as the new ambassador to Colombia. But the US Senate has taken no action on the appointment since it was announced in November, and none is scheduled.

Macmanus also faces opposition from some key Republican senators. Sen. Mike Lee of Utah, for example, said that “Macmanus does not appear to share the president’s belief in an America First foreign policy.”

Trump is also being pressured by the right to make the fight against imported drugs his chief objective in Latin America. For example, Trump is known to rely heavily on Fox News for guidance. Former diplomat Robert Charles recently wrote there that Tillerson’s trip must concentrate on combating drugs rather than, say, building an alternative economy.

Colombia’s ambassador to the US, Camilo Reyes, said in a written statement that in addition to implementing the peace treaty, the other main agenda item for Tillerson’s visit would be “Colombia’s accession to the OECD and US support for this major step forward, which would strengthen the South American nation’s economic position in the global economy.”

The OECD–Organization for Economic Cooperation and Development—is an elite international group of 35 countries.

OECD membership was not mentioned in any of Tillerson’s lengthy advance comments. Rather, Tillerson, the former CEO of Exxon-Mobil, also talked about a US role in exploiting Colombia’s “significant undeveloped oil and natural gas” reserves, stressed the importance of a united front against the Venezuelan government, and warned against Chinese and Russian investments in Latin America, calling the two nations “predatory powers that are now showing up in our hemisphere.”