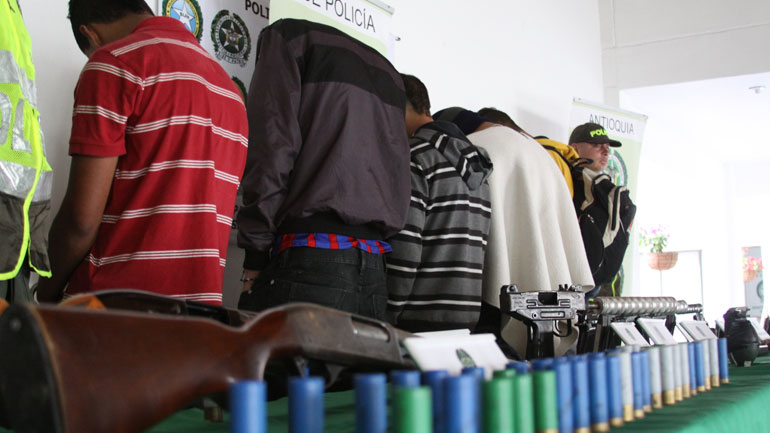 Colombia’s military on Sunday reported the arrest of eight alleged FARC guerrillas in a second wave of arrests in the southwest of the country where the FARC has intensely been attacking infrastructure.

Both municipalities are located in the southwestern Nariño department where the FARC has carried out numerous attacks on oil and electricity infrastructure since lifting the group’s unilateral ceasefire on May 22.

In the operation carried out in Roberto Payan, two alleged members of the logistical support network of the Daniel Aldana column were arrested and two firearms were seized.

The Daniel Aldana column is a fighters unit that operates in Colombia’s most southwestern municipality. Armed guerrilla units are commonly supported by unarmed support networks that, for example, carry out logistical operations or warn guerrilla fighters of army movements in the area.

The operation that sought the curbing of the FARC’s control in the Nariño state is the second in two weeks.

On June 19, authorities carried out more than 30 raids in the Tumaco municipality and arrested 20 alleged members of the Daniel Aldana column, a guerrilla unit accused of having out a series of attacks in the past month.

Tumaco has become one of the epicenters of the FARC’s guerrilla offensive against the state they resumed after the suspension of a five-month ceasefire that was called in December, but lifted after a military air strike killed 27 guerrillas, including a formal member of the guerrillas’ peace negotiation team.

The FARC has been engaged in peace talks with the government since November 2012, but the parties have failed to come to agreement on a truce for the duration of the talks.

Particularly port towns like Tumaco and the more northern port city Buenaventura have since been the frequent target of FARC attacks that have caused both towns to be without energy for days.

A recent FARC attack on an oil pipeline connecting inland oilfields to Tumaco’s port caused one of the worst environmental disasters in recent history when an explosive devise ruptured the pipeline and caused the spilling of 400,000 gallons of crude oil into Tumaco’s creeks, rivers and mangroves.

Guerrilla attacks mainly carried out in the south and southwest of the country left more than a million people without electricity for days, while more than a thousand were displaced within weeks after the FARC lifting their ceasefire due to combat between the army and the FARC, mainly in the west of the country.