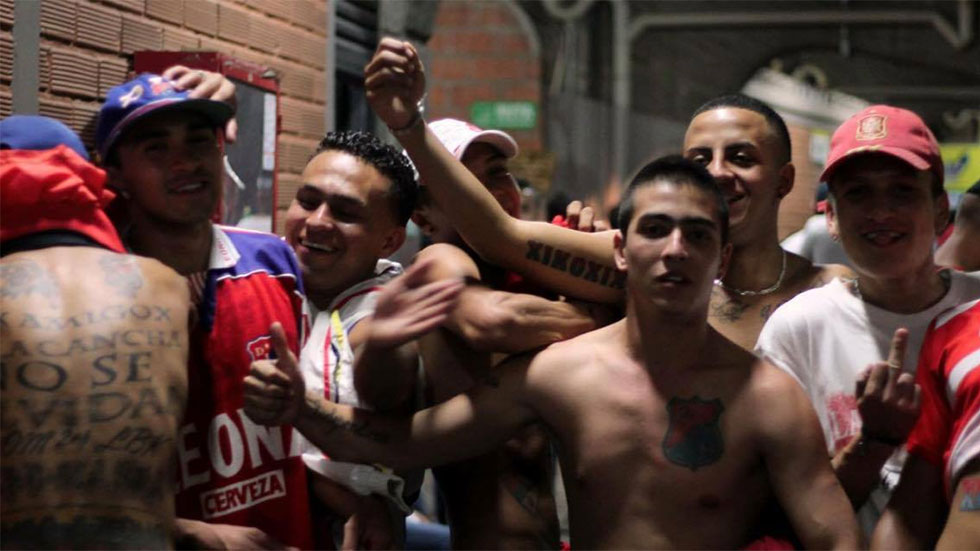 Method to the Madness: The Code & Culture of Colombia’s Barra Bravas

Colombia’s ‘barras bravas’ are not just the problem, but a crucial element of the solution if the government wants to end the rampant soccer violence and preserve the country’s unique soccer culture.

When it is game day, everything changes in any of Colombia’s cities.

Team shirts appear in every neighborhood, from the pristine $50 replicas in the fancy malls to locally made one-off loose representations of the current shirt on the downtown streets.

The radio plays salsa infused homages to the local team; beers are popped open; Aguardiente (Colombian firewater) is enthusiastically forced into the hand of anyone in the vicinity who doesn’t passionately plead and resist.

The city is buzzing with excitement and anticipation.

On such an important and esteemed occasion, a community will of course look to it’s leaders to set an example and direct proceedings.

This is soccer, so the usual rules do not apply.

Your value is not measured by your bank balance, the quality of your shirt or the comfort of your seat, you are judged on your passion, your commitment, your dedication. 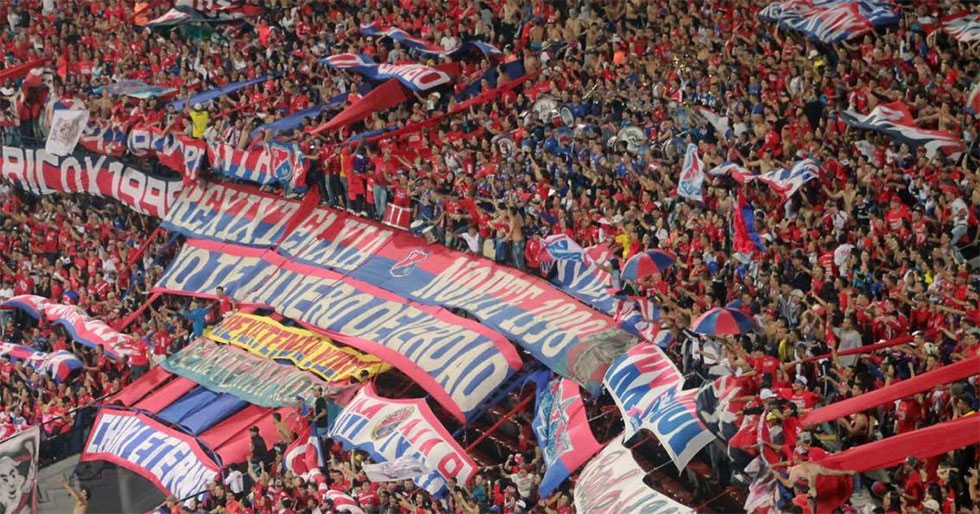 The barra brava of Deportivo Independiente Medellin gather at the northern side of the stadium. 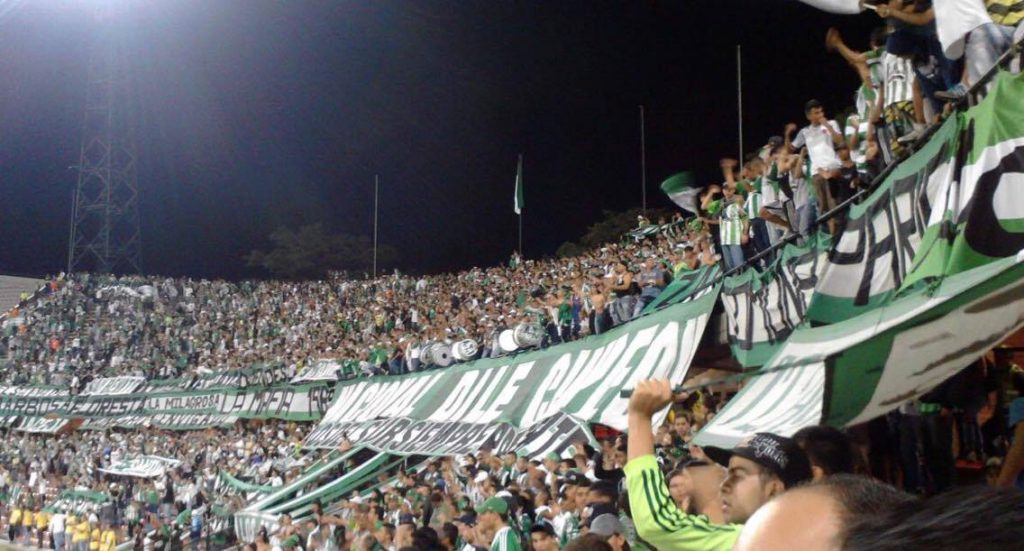 Fans of Atletico Nacional, Medellin’s local arch rivals, occupy the south side of the stadium.

Monday to Friday’s elites are now at the bottom; covered, comfortable, contemptible. The guy they crossed the street for to avoid yesterday is now king. They marvel at his work; as fans their reputation will be judged on the work lead by these mulleted maniacs.

In Colombia teams are not good or bad, they are “grande” (big) and “su papa” (the “father” of smaller teams). This means a team is not judged only on current league position, as is often the case in Europe, but principally on trophies, history and importantly by support and stadium displays.

In England’s premier league, stadiums are principally where fans go to watch soccer, in Colombia stadiums are where fans represent their city, their club, their culture.

In the most hardcore sections of the stadium, watching the game is often an unnecessary luxury. The constant movement of flags and banners, everyone around you bouncing in a sea of marijuana smoke. You are a participant, not a spectator. You are doing your job, sacrificing yourself for something bigger. The barras are the protagonists in this great drama, not the interested observers. 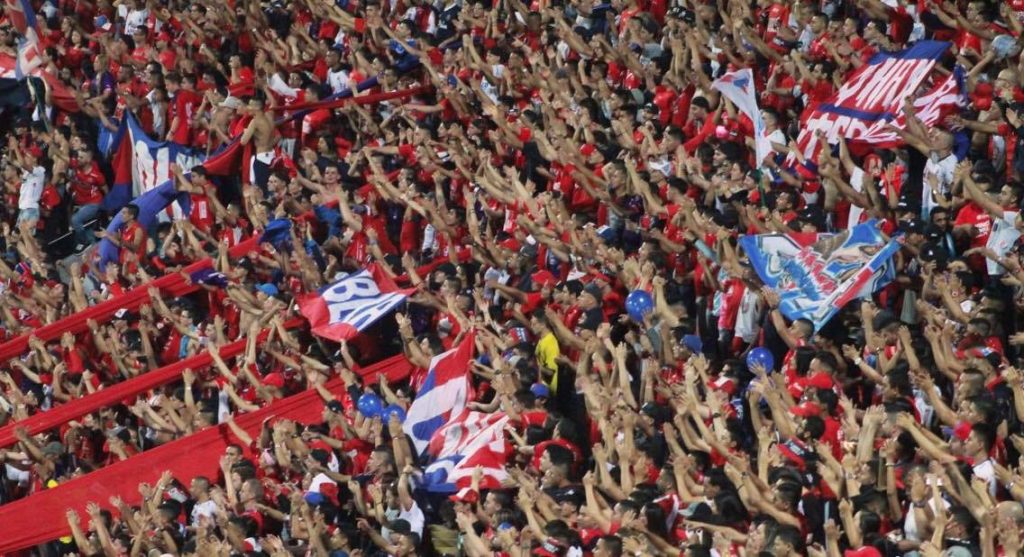 Medellin’s barra brava supporting their team from their “north side.”

Method to the Madness

Despite often coming from the poorer neighborhoods, Colombia’s barra bravas attend games home and away all over Latin America and thousands even made the trip to Japan for the world club cup final.

They plan, prepare and coordinate mass stadium displays. This can mean 45,000 fans working together to follow the instructions of the barras to lift and sometimes turn pieces of plastic, arranged and distributed by the groups. In addition, they have flares and fireworks, as well as huge intricately designed banners that are unraveled and retracted at key points in the game. Deportivo Independiente Medellin once had a banner made of a single piece of material that covered all four sides of a 45,000 capacity crowd.

Throughout the game a full band with a variety of instruments, will provide the backing for constant singing from the supporters. The songs do not start and stop depending on the action, the hypnotic rhythm never ends. 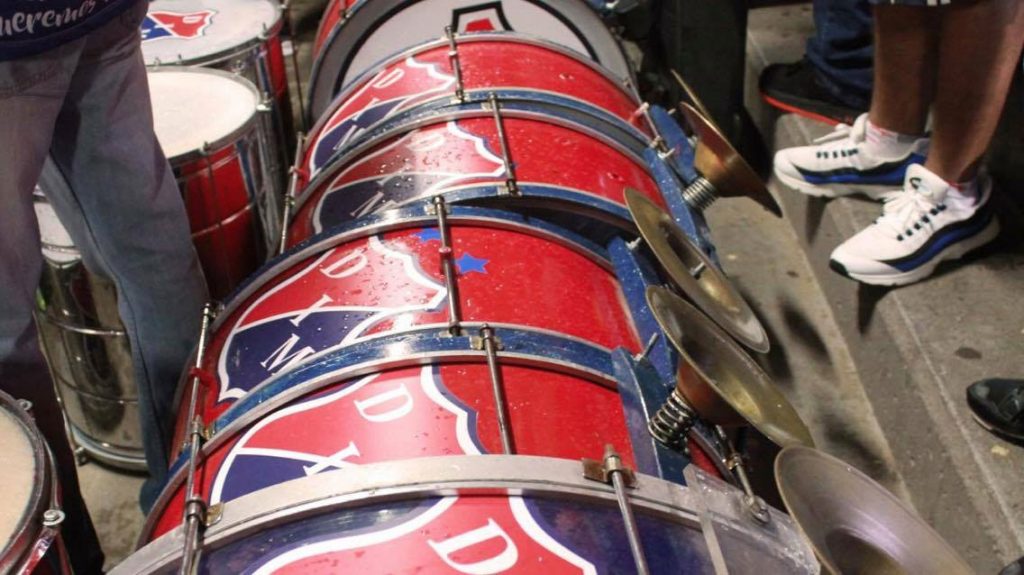 The barras bravas of all teams are the ones providing the soundtrack to the matches.

There is a song for every occasion; whether it is time for the referee to be reminded that his mother is a sexual miscreant, the players require more ‘eggs’ (balls) or if the fans wish to declare their undying, passionate love for the club.

Many of the songs feature the rhythm of Argentine ballads (hence the romantic notions of dying for the club and loving self-sacrifice) with some having more traditional Colombian influences (Deportivo Cali‘s modified rendition of Grupo Niche’s Cali Pachangueroa personal favorite).

While often maligned, Colombia’s barra bravas are truly incredible. A true embodiment of what can be achieved through bottom-up community partnerships.

Law now states that Colombian clubs can not provide direct funding for the barras, so these incredible displays are now predominantly funded by barra led initiatives; to be the biggest, you need to be a true business.

Los Del Sur (LDS) is the barra of the fan groups based in the south of the stadium for the Atletico Nacional games. The group funds displays and trips with dozens of money making initiatives, including selling branded LDS merchandise, operating multiple LDS branded shops and selling albums of studio versions of the stadium songs.

In addition, the barras are involved in selling drinks and food, selling tickets outside of the stadium and also, at times, less legitimate business ventures – drugs, prostitution and extortion.

The most important barras have a defined hierarchy, with an overarching group and leadership above smaller blocks with their own leaders.

Los Del Sur is the overarching Atletico Nacional barra, and within that group there are subgroups such as Prada Verde and Mafia 89. The overarching group will have direct links to club officials, police and logistics groups who manage operations within the stadium.

Within the working class sections of the stadium, areas where tickets are cheapest and the hardcore fan groups are based, there are set positions for each group. The band will be the front row of the second tier, while there are sections reserved for each block of the barra.

The more central sections are reserved for the more important and influential fan groups, keeping this spot depends upon travelling to away games, singing and contributing to the running of the barra as a whole. It is vital that each part of the barra pulls its weight, and those who don’t can lose prominence or their spot.

The barras and the logistics teams manage everything within their section of the stadium. Logistics teams must wear different colored shirts and are responsible for managing the lines outside of the stadium, helping police as fans enter, checking for any problems in the stand and keeping fans off the pitch. Logistics team members are always fans themselves, who provide a relatable link for fans between themselves and the authorities.

Police check fans as they enter the stadium and have a presence around the ground before, during and after the game. They are strongly discouraged from entering the stands, particularly the “populares,” as this can be inflammatory and heighten tensions; emotional, intoxicated fans can respond angrily to uniformed offices inflicting what can be perceived as unjust justice within the areas they can usually self-police.

Alcohol, knives and drugs are banner from Colombian stadiums but they are always present in the ‘popular’ sections of the stadium; I recently saw two drunk 14 year olds doing coke off a 8 inch knife during an Atletico Nacional game.

This week fans of America de Cali and Deportivo Cali ended up brawling on the pitch and around the stadiums for hours after the final whistle in the Cali derby. The incident was reportedly sparked by America fans breaking into the away section to fight with Deportivo fans. Women and non-barra Deportivo Cali members ran onto the pitch to escape the violence, and the whole system of stadium management then collapsed.

Perdomo’s proposal for implementing Taylor Report style reforms will be difficult in Colombia.

It is vitally important that the barras play a key role in this process, as they are best placed to implement the recommendations and work with the fans directly. Attempting to impose new regulations on fans will create conflict, and will both negatively impact on the stadium experience and slow the intended progress.

The barras are the most effective instrument for enacting change but also the biggest possible impediment to it.

The number of seated sections in Colombian stadiums is increasing rapidly, which will help with stadium management. That said, within the ‘populares’ traditional seating will not be accepted – simply put, fans will not sit on them. This means tailored solutions will have to be introduce, as is the case with the Atanasio where the seats are only sturdy plastic squares built into the terracing – perfect for jumping on.

With the more modern stadiums turnstiles work fairly well, and the number of tickets allocated for each section is generally carefully managed. That said, at the smaller stadiums there is greater possibility for counterfeit tickets, and while the stadium is split into sections – these are often huge and overcrowded pockets is a problem.

Colombia is a long way off implementing designated seating in the stadium. This was a key aspect of the Taylor Report, but would be impossible in Colombia at this point.

The role and deployment of the police is also something that would require review. I have attended games where there have been literally more police than fans, with authorities rolling up in vehicles resembling a tank, and others where the police were massively under-resourced and actively avoiding conflict.

The former is a huge waste of money and can provide turn a minor profit to a significant loss for smaller clubs – as they are responsible for contributing to police costs, providing food and so forth.

With the latter it means that the police are the most vulnerable group within the stadium and are unable to effectively do their job. I attended a Medellin derby in the north stand with the hardcore Medellin fans. Police numbers were too low and for this game security checks were heightened which meant fans would be entering the stadium late for the game. As a response the fans decided to push the police aside, and a wave of thousands of fans rushed into the stadium without being checked or presenting a ticket.

Changes are clearly needed but changes must reflect and build upon existing fan culture.

The incredibly dedicated fans and the barras who have refined their craft over generations, make for an amazing stadium experience. Steps must be made to ensure this experience is always a safe one, but authorities must tread carefully to preserve what is truly special and ensure the collaboration of South America’s soccer leaders.

Author Simon Edwards is a South American soccer journalist based in Medellin. He is the Colombian expert on the Copa Libertadores and South American Football Show podcasts for the World Football Index.