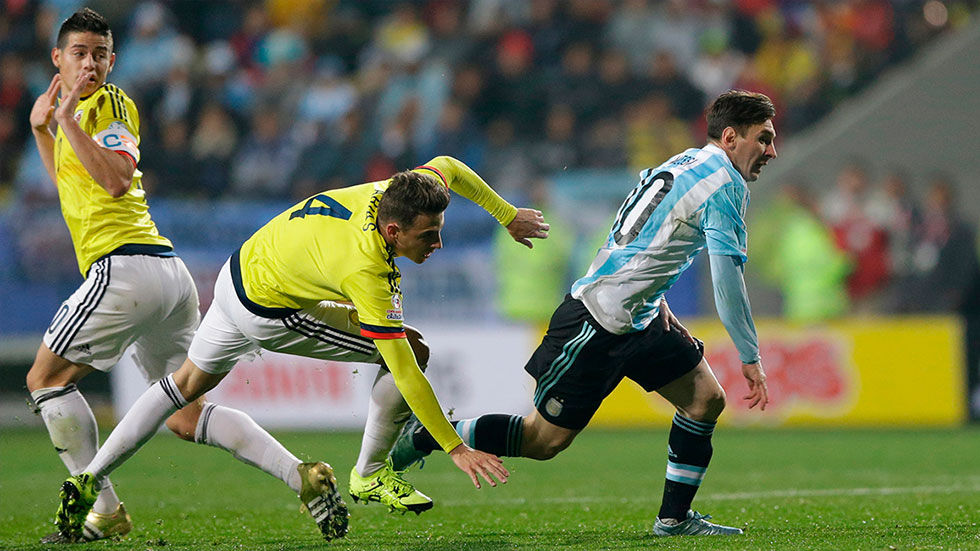 A stunning display from Barcelona’s Lionel Messi led Argentina to a comfortable 3-0 win over Colombia in a South American World Cup qualifier on Tuesday.

A goal and two assists from the Argentine captain breathed new life into his side’s bid to qualify for the World Cup in Russia  in 2018 following a poor start to the campaign.

The defeat sees Colombia slump to sixth position in the qualifying group standing as they failed to score a goal for the second game this week.

Jose Pekerman made a number of changes from the team that drew 0-0 with Chile last Thursday with Davinson Sanchez and Eder Alvarez coming into the defence, Wilmar Barrios, Daniel Torres and Juan Cuadrado starting in the midfield while Radamel Falcao replaced Miguel Borja in attack.

Argentina manager Edgardo Bauza too shuffled the deck following their disappointing 3-0 loss to bitter rivals Brazil in the last round with Lucas Pratto replacing Gonzalo Higuain in attack, Ever Banega preferred to Enzo Perez and Gabriel Mercado getting the nod ahead of Pablo Zabaleta.

Colombia started well with Juan Cuadrado making an early break down the left only to shoot over from outside the box in the first minute.

Falcao Garcia headed over the bar in the 7th minute following more good work from Cuadrado on the left flank but the Argentinians began to grow into the game with Lionel Messi in particular exerting a strong influence.

Colombia’s indiscipline early on put them under pressure with Otamendi heading over from a dangerous Messi free kick just before the Barcelona star gave the home faithfiul something to cheer about with a stunning strike from another free kick.

The Argentina captain curled the ball from 25 yards off the underside of the bar past the hapless David Ospina in the Colombia goal to give “La Albiceleste” the lead in the 10th minute.

The five-time Ballon d’Or winner turned provider in the 23rd minute with a beautifully weighted pass to striker Lucas Pratto who repaid his managers faith in him with a tidy header to put his team two ahead.

Colombia failed to gain a further foothold in the first half with a visibly hungry home team looking to bounce back from last week’s defeat with many commentators billing this as a must win game for them.

Colombia’s Argentine coach Pekerman looked to the bench at half time introducing Atletico Nacional’s Macnelly Torres for Wilmar Barrios but the second half continued in similar fashion as the first.

With Messi almost unplayable in the middle of the field, Argentina had a strong platform for attack with Angel Di Maria denied only by the post to make it 3-0 in the 68th minute.

Further changes by Colombia which saw the introduction of Jonathan Copete and Carlos Bacca failed to stem the tide as Los Cafeteros failed to really trouble the Argentina goal.

Another intervention by Messi in the 84th minute sealed the game for Bauza’s side as the diminutive attacker stripped Colombia’s Murillo of possession before squaring it for Angel Di Maria who hammered the ball into the roof of the net to seal all three points for his team.

Try as they may but Colombia could not find a consolation goal despite a fine free kick from James Rodriguez in the 92nd minute which ricocheted  off the post.

Colombia have now just scored one goal in their last seven meetings with Argentina.

The result means that Colombia fall behind Argentina in the CONEMBOL standings on 18 points, outside the qualification positions.

Jose Pekerman will need to find a better balance for his team ahead of their next qualifier match against Bolivia in March.