Colombia is finally making a mark in global medical tourism, recording a 61%  increase in the dollar value of the trade in 2013, according to government figures.

“It’s due to the change of perception of Colombian security abroad and the support of the government.  They are making medical tourism a state policy,” said David Castro Lotero, co-founder of Clinical Travel, a company that promotes medical tourism in Colombia in an interview with Colombia Reports.

Castro said Mexico, Costa Rice, India and Thailand were all competing for a part of the growing pool of tourists from the United States and elsewhere seeking cheaper medical alternatives.

“Colombia in particular is competing for the Caribbean island market, where people have the money for treatment, but the medical facilities aren’t at a high level.”

Bogota for hearts, Medellin for faces

Now, the Colombian cities of Medellin and Bogota are starting to appear on the global medical tourism map.

60% of medical tourists arrive via Bogota’s international airport and a third arrive in Medellin, the second biggest city in Colombia. 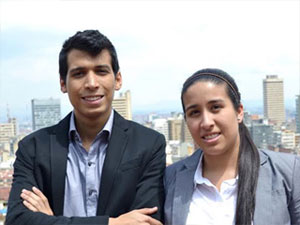 The latest move by the Colombian government to further grow medical tourism has been to mentor a brother and sister team from Colombia’s coffee region, in their efforts to help those from overseas find the right clinic and right travel arrangements for their needs.

Clinical Travel is the brainchild of David Castro, 22, and Tatiana Castro, 23, from Pereira in the west of Colombia.

“We began this project in June last year, when we realized the pain of many people from abroad who was coming to Colombia for a medical treatment but had a lot of problems and issues due to the lack of information about the country and the process involved,” said David, speaking to Colombia Reports on Thursday.

“For example, we had heard people to Bogota (where the average daily high is 68 degrees Fahrenheit) arriving in sandals and summer clothes believing Colombia was a huge beach.”

The Castros are working with clinics and doctors to provide a free-one-stop shop for patients looking for medical services in Colombia.

The mentorship of David and Tatiana by entrepreneur Alexander Santana is being funded through the Productive Transformation Program (PTP) program, ICT Ministry through Apps.co and Connect Bogota.