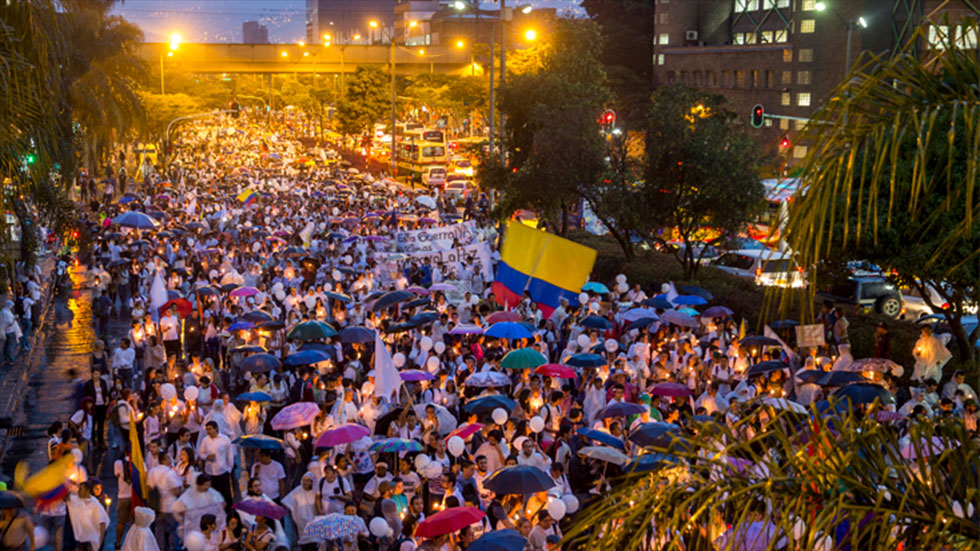 Medellin, which convincingly voted ‘No’ to peace with the FARC in a referendum only five days earlier, massively took to the street to demand peace on Friday.

The march was the latest of a series of marches held throughout Colombia in response to the abrupt suspension of the already started peace process that plunged the country in a political and public security crisis unseen since the 1990s.

But the march in Medellin was particularly special; the city is one of the main electoral bastions of former President Alvaro Uribe, who has consistently opposed peace with the group he claims killed his father.

However, a lot has changed since Sunday’s referendum, also in Uribe’s Antioquia province where locals chanted “Antioquia is not Uribe.”

After the revelation Uribe and his Democratic Center had purposely misled the electorate, the party’s campaign manager resigned and was charged with electoral fraud, a crime with a maximum penalty of eight years.

In spite of rains, approximately 10,000 “paisas” responded to student, minority and victim organizations’s petitions to take part in the march.

The march in Medellin confirmed the major disconnect between the Colombian people and their political elites.

When Uribe’s party organized a protest against a peace deal a few weeks ago, some 25 people showed up, but when the city took to the polls it convincingly voted ‘No” to the peace deal with the FARC.

Santos, a member of one of Bogota’s most powerful elites, failed to convince Colombians that his deal with the FARC deserved ratification by the people.

But when social organizations called for peace marches, tens of thousands gathered on Wednesday in the capital Bogota alone.

But in Medellin something new happened, according to local newspaper El Colombiano. ‘Yes” and “No” voters marched together to show they both want peace and reconciliation, and they want it quick.

During the protest, marchers wrote and compiled letters to victims of Colombia’s 52-year-long war expressing their solidarity with the victims and their plight.

Earlier, victim representatives had expressed disappointed over what they perceived as a lack of solidarity from urban Colombians, who live far away from where the conflict takes place.

“We thought the part of society that has been least affected by the war would have shown solidarity towards those who have.”

But those who took to the streets in Medellin emphatically made clear that also those living in their city feel solidarity with their compatriots in less fortunate areas of the country.