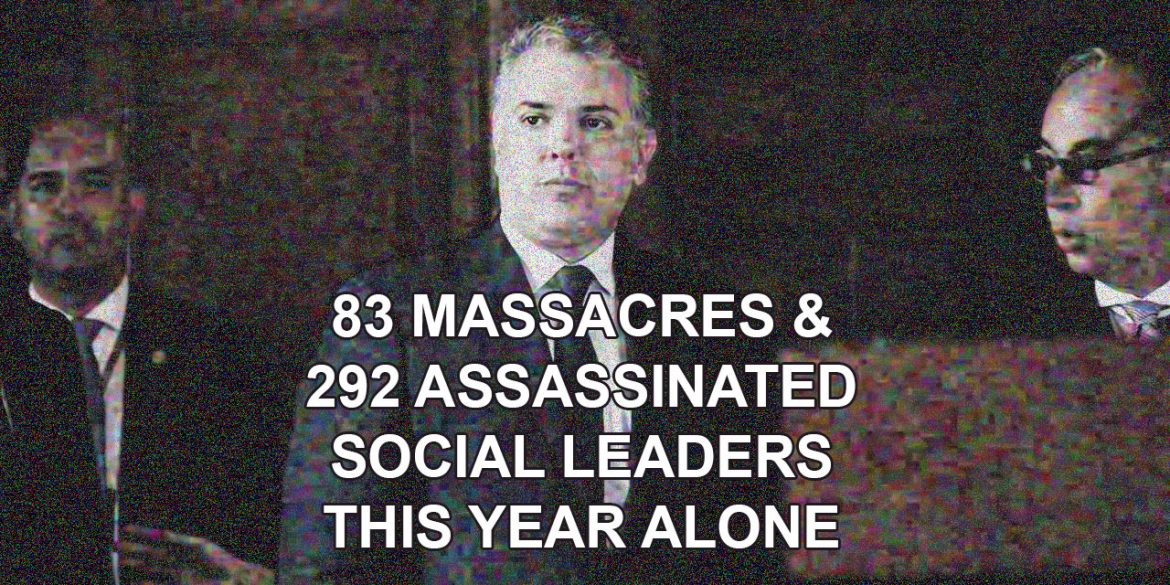 Massacres more than tripled in Colombia this year as corruption is corroding the government’s capacity to govern.

At least 349 people were massacred in a new wave of violence that adds to ongoing terror caused by the mass killing of human rights defenders and community leaders.

According to Indepaz, 292 social leaders have been assassinated so far this year, which could become the most politically violent since 2016 when former President Juan Manuel Santos signed peace with demobilized FARC guerrillas.

Another 12 family members of social leaders have been assassinated as well as 60 reintegration members of the FARC, which became a political party in 2017.

“That damn drug trafficking!” exclaimed Defense Minister Carlos Holmes Trujillo in response to the latest massacre, conveniently forgetting he oversaw the massacre of 13 by police in Bogota in September.

Trujillo, whose father was a Medellin Cartel associate, has become the personification of an administration that is being consumed by its own corruption and increasingly unable to govern.

Far-right President Ivan Duque’s control over the prosecution has allowed him to suppress investigations into the president’s Democratic Center party that conspired with a drug trafficking organization to rig the 2018 elections.

The president’s reluctance to implement the peace deal is met with growing disapproval because of the increasingly evident criminal and corrupt interests driving this.

Violence spiraling out of control

The escalation of violence is not just due to drug trafficking as the defense minister would like to believe, but political and ethnic violence, and a surge of drug-funded guerrilla and paramilitary groups.

Additionally, corruption within the security forces is causing major tensions within both the police and the national army.

In some cases, police and army units have been accused of working together with drug traffickers, paramilitaries and even dissident FARC guerrillas.

These illegal armed groups are both promoting and taking advantage of the chaos in the government and security forces in order to pursue their own interests and impose their own rule.

Especially in areas where multiple illegal armed groups vie for control either over territory or illegal activities like drug trafficking and illegal gold mining civilians, and particularly social leaders, found themselves in the line of fire.

Extreme poverty caused by the coronavirus additionally facilitate the recruitment by illegal armed groups and increases tensions between civilians and the government, which appears to be losing grip as violence spirals out of control.