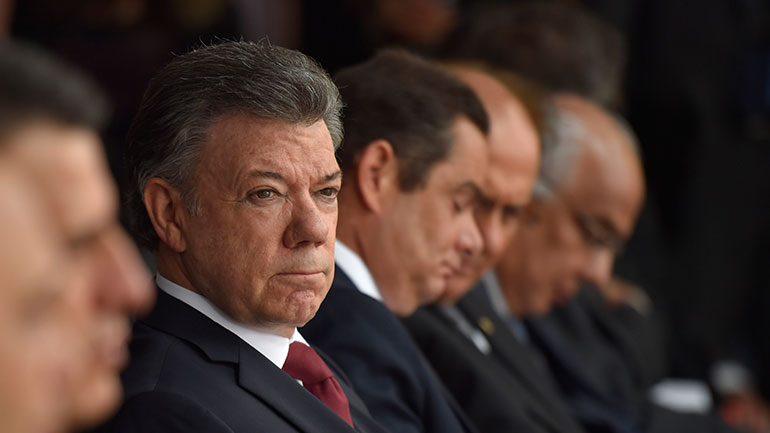 The approval rating of President Juan Manuel Santos took a blow in the first poll of 2016. Amid widespread pessimism about the future of their country, 64% of Colombians said to disapprove of their president’s policies.

Santos can count on the approval of only 29% of Colombians, one of the lowest approval ratings received by the president during his five and a half years in office.

A recent economic slowdown that has caused food rises to skyrocket and continued disagreement with how Santos is dealing with peace talks with leftist FARC rebels, added to a general pessimism about Colombia’s direction; 61% of polled Colombians said the country is heading the wrong way.

The political decision that received most disapproval of the Colombian people was the sale of the state’s majority stake in energy company Isagen. Of the 1,000 people of who interviewed, 85% said to oppose the controversial sale.

Colombia sells Isagen controlling stake to Brookfield for $2B

Ongoing crises in the country’s health sector proved another controversy. According to the poll, 82% of Colombians claimed Santos is mishandling public health care.

Eighty percent of the respondents said Santos is mishandling unemployment in spite of government claims unemployment has dropped considerably since Santos took office in 2010.

Some 77% said to disagree with their president about how poverty reduction is handled by the government.

The majority of polled Colombians, 56%, said to simply not understand the socio-economic model aspired by Santos.

The flagship policy of Santos, securing peace with the half-a-century-old rebel groups FARC and ELN, also continue to count on pessimism in spite of major advances made towards a negotiated end to the hemisphere’s longest running conflict.

As the international community is preparing to monitor a pending peace deal and verify the state and guerrillas’ compliance to the agreement, only 49% of Colombians believe there will be actually an accord.

Forty-five percent said to not believe there will be an agreement.

Some 71% said to disagree with how Santos is dealing with the guerrillas and 61% said to disapprove of how the government is carrying out the peace process.

Another 75% said to disagree with how Santos is dealing with paramilitary groups that years ago overtook the guerrillas as primary human rights violator in the South American country.