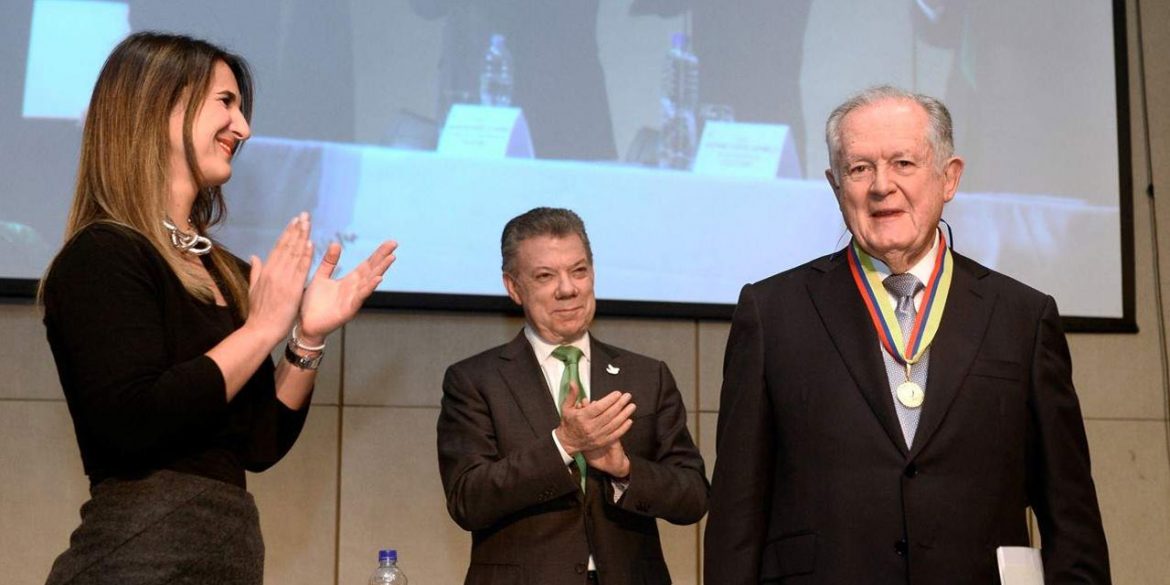 Luis Carlos Sarmiento is Colombia’s richest man and an increasingly controversial figure over his companies’ involvement in corruption and malpractice scandals.

Sarmiento was born in 1933 in Bogota to a well-off family that owned estates in the town of Guayabetal just southeast of the capital.

The son of the landowner was quite the whizkid with a particular talent for calculus and by the time he was 14 he allegedly was already doing accounting for one of his father’s associates.

Sarmiento studied civil engineering at The National University in Bogota and did an apprenticeship with Santiago Berrio, a famous engineer from Antioquia, after graduating at 21.

His mentor was murdered by Liberal Party guerrillas in 1956 during La Violencia, a decade of extreme violence between liberals and conservatives, and the company was liquidated.

According to himself, Sarmiento received a COP10,000 fee from the company and began working as a freelance engineer mainly on high-risk projects in remote regions marred by violence.

The engineer founded his first company, the Luis Carlos Sarmiento Angulo Group in in 1959. The engineering firm hit the jackpot when it was awarded to build a highly urbanized lot in Bogota, which eventually became neighborhood El Paseo.

Sarmiento’s firm was able to ride the major urbanization wave of the 1960s, which allowed him to become one of the main players in the country’s booming urban construction sector.

The engineer entered the financial sector in 1970 and created multiple investment firms that allowed him to invest in construction projects Sarmiento considered profitable.

The business mogul’s financial enterprises also found him embroiled in a number of high-profile drug money laundering scandals, however.

Sarmiento’s Banco de Occidente was particularly profitable because it laundered more than $1.2 billion for late drug lord Pablo Escobar and his Medellin Cartel in 1987 and 1988 alone, the United States’ Drug Enforcement Agency revealed after “Operation Polar Cap” in 1989.

The operation revealing the criminal activity of Sarmiento’s bank was hailed as the “largest money-laundering crackdown ever carried out by the federal government,” late US Attorney General Dick Thornburgh said.

The same bank and the Banco de Bogota, which was acquired by Sarmiento’s Grupo Aval in 1987, were found funneling money from the Cali Cartel to the presidential campaign of former President Ernesto Samper in 1994.

The money laundering did not affect Sarmiento’s ongoing investments in Colombia’s financial sector and by the turn of the century, his investments had made him one of the country’s largest banking magnates.

The businessman currently controls over a third of the entire banking industry in Colombia, continues to be active in construction and recently branched out into other sectors.

In 2012, he purchased majority control of Colombia’s largest newspaper, El Tiempo. This has created controversy as watchdog groups expressed concerned that Sarmiento’s purchase represented a conflict of interest between his businesses and the information published in the newspaper.

Sarmiento has been personally close with all of Colombia’s presidents since becoming one of the country’s wealthiest men. He was especially close to Alvaro Uribe and even openly endorsed his re-election in 2006.

When Uribe’s protégé Ivan Duque wanted to become president in 2016, the banking and engineering mogul financed two thirds of his campaign, and with success.

Sarmiento has long steered clear of scandals until last year when the bridge of one of his construction companies collapsed in Guayabetal, the town where his father used to have his estate.

Controversies began piling up earlier this year when the CEO of one of his subsidiaries, Corficolombiana, was sentenced to prison for bribing Uribe’s former vice-transport minister together with Brazilian partner Odebrecht. Sarmiento’s son, the CEO of the family-owned Grupo Aval, is currently being investigated for his alleged role in the corruption practices.

To make matters worse, the same firm responsible for the 2018 bridge collapse in Guayabetal got into trouble again, amid suspicions that malpractice by the company could have caused a number of landslides in the same municipality that cut off virtually one-third of the country in June.

None of these scandals have so far been able to personally affect Sarmiento, whose strategic alliances with Colombia’s most powerful have always allowed him to wield a lot of power, but without much public scrutiny.