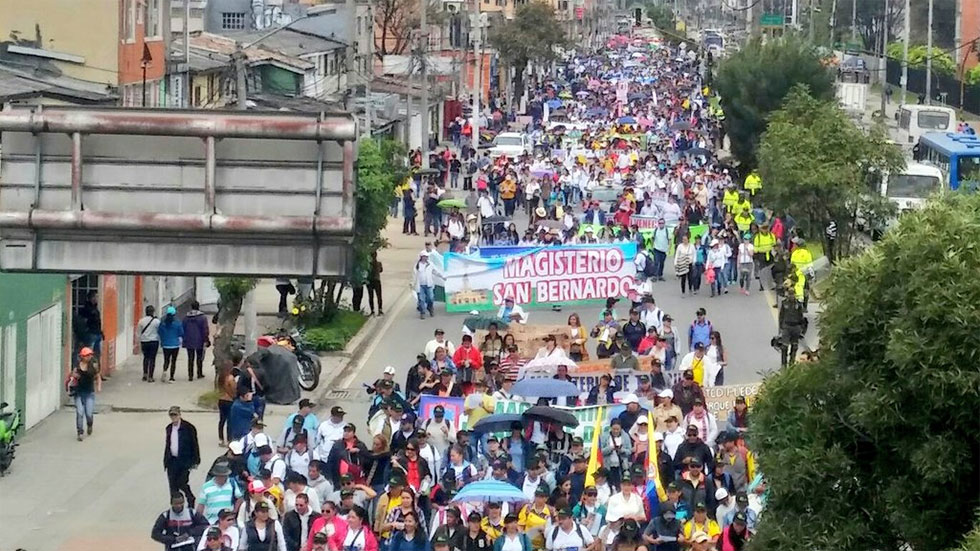 Hundreds of thousands of Colombia’s state employees laid down work and took to the streets in all Colombia’s major cities on Thursday, increasing pressure on the government to attend their calls.

The strike pretty much shut down government amid increasing social unrest about the chronic failure of the administration of President Juan Manuel Santos to honor commitments made to end previous strikes.

Additionally, labor unions CUT, CGT and CTC wanted to express solidarity with the western province of Choco and the city’s largest port city Buenaventura where citizens have been on strike for a week, demanding an end to chronic state neglect.

According to the unions, more than 600,000 teachers, prison guards, prosecution workers and other state workers are fed up with Santos, who ended earlier strikes with promises that were never met.

The anti-government protests have Santos in the corner. After decades of mismanagement, corruption and neglect, the treasury is empty, while state workers and minorities are becoming increasingly determined to get the public investments and wage hikes they were promised but never received.

‘Half a million’ in Colombia on strike, from the jungle to the capital

Additionally, the protesters are angry over the government’s almost absolute inability to even start or maintain negotiations.

According to the CUT, Colombia’s largest labor union, Labor Minister Griselda Restrepo announced renewed talks with teachers last week, but hasn’t been heard of since.

In turn, millions of parents are unable to go to work.

To make Santos’ position even more precarious, the long-divided labor unions have joined hands and unitedly demand to talk to the government about investments in Colombia’s public institutions from schools to prisons.