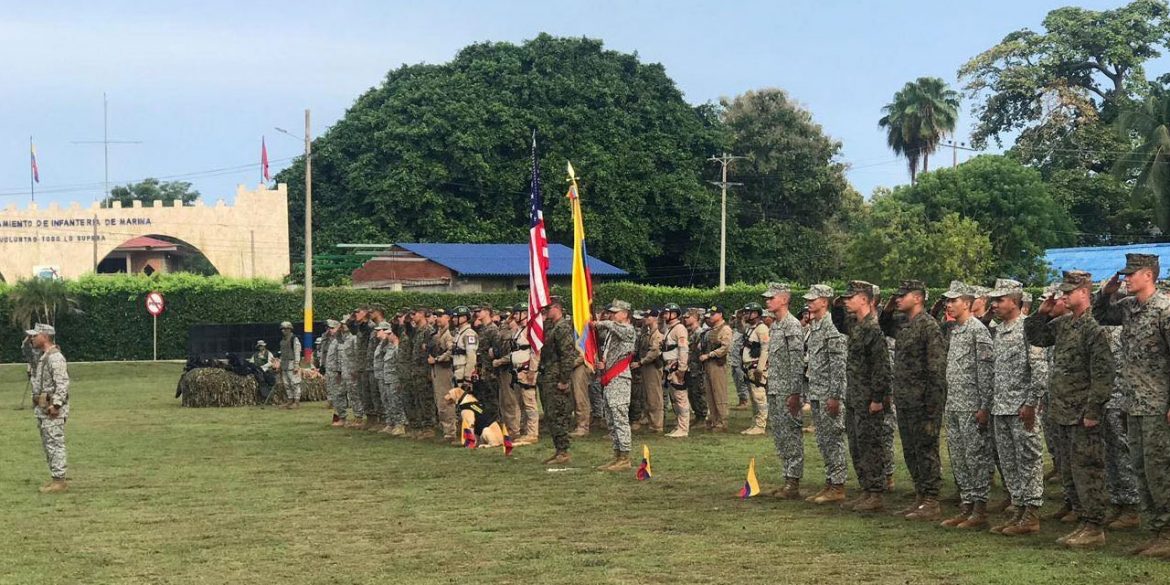 Marines from both Colombia and the US are in joint exercises all week on Colombia’s Caribbean coast, the latest step in building a US-led multinational armed force able to intervene in Latin America and the Caribbean.

The immediate purpose of the week-long exercise, based at a Colombian facility in Coveñas, is to prepare for humanitarian assistance and disaster relief, according to the US Southern Command, the Miami-based arm of the US military focused on Latin America and the Caribbean.

The long-term goal is creating a multinational military force that can help “guarantee regional security,” according to same military division.

Colombia’s military is the lead partner among Latin American armed forces working with the US to create a command that can effectively combine military units from multiple countries and languages.

Most recently, for example, the group set up a training facility to help Guatemala’s army prepare for “urban combat”and counter-drug operations, according to a Southern Command release.

Other projects have involved post-hurricane relief in the Caribbean and assistance with schools, health clinics and water supplies in Guatemala, Honduras and Belize.

Over the past 20 years, US military has provided about $10 billion in equipment and training for Colombia’s security forces. As a result, Colombia is now a solid military partner of the US and has been used in place of US soldiers for training and other missions in more than 60 countries.

US military units “are receiving orders from a foreign officer; I’m leading troops from a different nation,”said Colombian Marine Lieutenant Colonel Erick Del Rio, who is embedded as a ranking officer in the US Southern Command.

The success with Colombia has paved the way for the US to do similar work in expanding the capacity of other Latin American militaries.

In Guatemala, “we’re making them better able to conduct their own training and therefore building capacity like we did in Colombia, where they’re able to self-sustain and eventually do the mission we’re doing with other countries,”said US Marine Corporal Cody Inch, in a video released by the Pentagon’s media unit.

Such a multi-national force could be more effective in disaster relief and drug interdiction than a single-nation effort. And the US could use it to push Latin American militaries toward professionalism and away from politics.

On the other hand, it could also be a way the US could accomplish regime change or some other political objective in a South or Central American country.

For example, no single country might willingly go alone in a military intervention. But a multi-Latin force with US participation might be politically palatable.