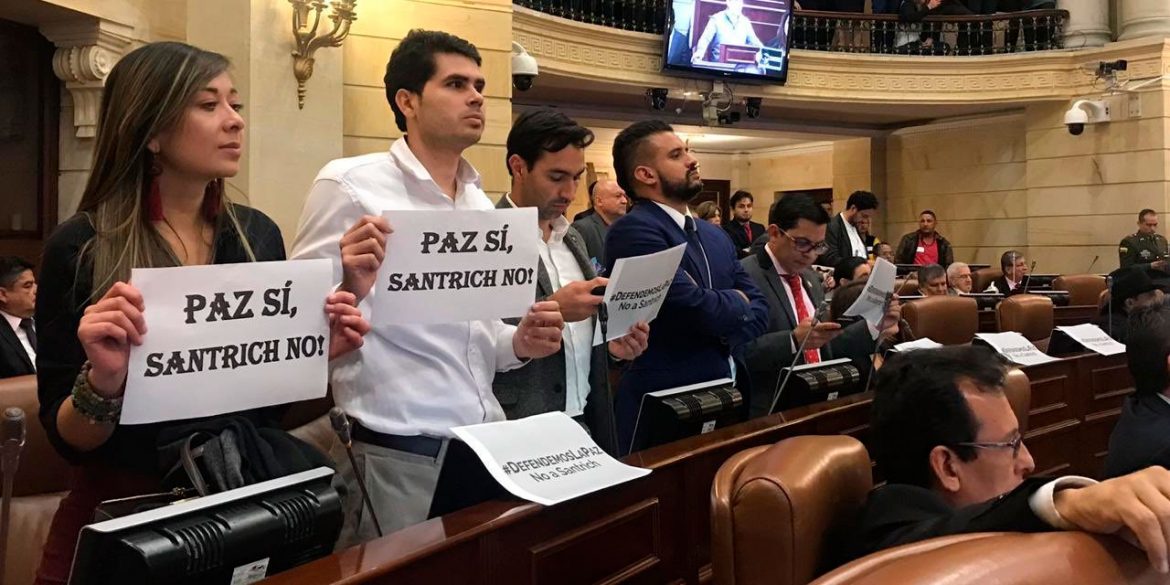 ‘Jesus Santrich’s’ first day in Colombia’s congress: a bitter pill for many

The delayed arrival of “Jesus Santrich” as the FARC’s leader in the House of Representatives spurred mixed reactions among his fellow lawmakers on Wednesday.

The former rebel leader was supposed to have been sworn in in July last year already, but was impeded because he was in jail over a so-far unsubstantiated US drug trafficking charge.

The war crimes tribunal’s rejection of the extradition request over a lack of evidence and the Supreme Court’s decision to release him from jail was far from enough for a warm welcome.

Others, however, defended the FARC leader’s possession of his seat and urged colleagues to respect the courts and honor the country’s peace process that granted the former guerrilla ideologue a seat in the House of Representatives.

For the ruling party Democratic Center (CD) party this was too much to ask. The far-right supporters of former President Alvaro Uribe have rejected the peace process since before it began.

The moment Santrich entered his first commission meeting, Representative Jairo Cristancho of the CD simply adjourned the session, claiming the FARC representative’s arrival was “an insult to the country.” 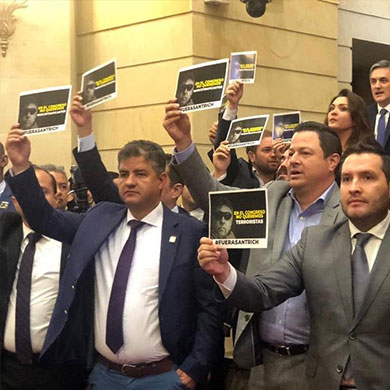 When the House convened in the afternoon, CD Representative Christian Garces and read a statement in which he expressed his party’s “fierce rejection of presence of the narcoterrorist.”

The minority coalition of President Ivan Duque was not alone in its rejection of Santrich’s presence. Members of conservative and center right parties help up a “Santrich out” sign in protest.

Members of the centrist and pro-peace Green Alliance party also expressed their rejection with a sign that said “Peace yes, Santrich no.”

Representative John Jairo Hoyos (U Party), whose father was murdered by the FARC five years after the deputy from Valle del Cauca was kidnapped, surprisingly came out in defense of Santrich.

“My father received 12 shots from a rifle,” said Hoyos, adding that the FARC representatives “listened to us victims with profound respect” while negotiating the justice element of the 2016 peace agreement.

We learned that day that the country needs an enormous reconciliation process because the wounds of war are dramatic and deep, and our loved ones have been taken away.

Leftist Senator Ivan Cepeda urged calm and reminded that “those talking about Pablo Escobar having been here to remember that many of them had ties to [Medellin Cartel founders] the Ochoa clan. They have no right. I call on the Democratic Center, the president and Jesus Santrich not to be arrogant.”