James Rodriguez, Colombia’s stud soccer prodigy and winner of the Golden Boot award at the 2014 World Cup, has become the new “face” of Bronzini Black, a Colombian underwear brand. 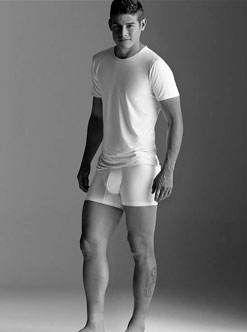 James posed for the new collection, aptly named “J10 James,” in a five-hour photoshoot in Medellin just weeks before he left for Spain to join his new team, Real Madrid, according to Bronzini.

“We chose James Rodriguez to be the face of Bronzini Black because he is a man of style, with confidence in himself, and is surprising at all times,” said Martin Nova, marketing vice-president for the Exito Group.

James will be given 500 items from his underwear collection, which means, if he plays his cards right, he will be able to avoid the washing machine for about a year and a half.

The collection will be sold in stores starting Friday, August 29.