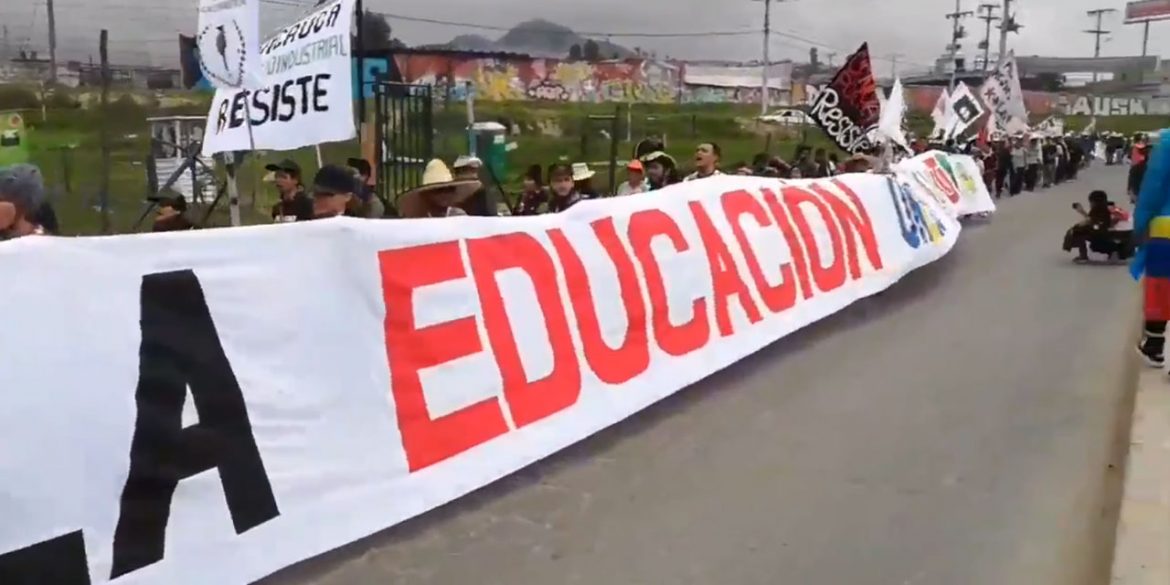 Students, teachers, indigenous peoples and labor unions around Colombia are set to take the capital Bogota on Wednesday in what could be the largest protest yet against President Ivan Duque yet.

The president’s first 100 days have been riddled with country-wide protests, strikes and shut-downs by hundreds of thousands of students decrying the Colombian government’s education budget and and chronic under-funding of public universities.

Students and a growing number of supporters have called on the administration to reassign almost $1.5 billion (COP4.5 trillion) from the national budget to adequately fund universities.

So far, Duque has agreed to reallocate $156 million (COP500 billion) to higher education, of which 87 million (COP279 billion) would go to universities, but students say the government is maintaining a budget gap that has deteriorated public education infrastructure for years.

Now, as Duque meets student unions at the negotiation table, students country-wide are continuing their marches, this time in what they’re calling a “capital takeover.”

Students have been walking to Bogota from all over the country, many touting banners with the names of their universities.

“(It is) impossible not to be thrilled at the feat of our companions #WalkersForTheEducation,” read one tweet showing a video of throngs of students in a Bogota plaza. “It is unique the courage of these warriors who travel the country to make our voices be heard, total admiration for them.”

An expected 20,000 protesters are expected in Bogota alone, and, according to Colombian newspaper El Espectador demonstrators will be joined by farmers, judicial officials and followers of congressional opposition leader Gustavo Petro. Protests are expected to begin at 7 a.m. at various routes around the city.

In anticipation of the marches, Duque decried the demonstrators saying, “there are people who want to take political advantage of any demonstration.”

“I respect social protest as long as it is peaceful and in accordance with the law, and does not go against the rights of other Colombians,” Duque said.

Despite his calls for peace, his forces have done quite opposite in recent weeks. Peaceful protesters in mid-November were violently attacked by Colombia’s notoriously aggressive riot police ESMAD, aggression that is now being investigation by the United Nations.

Police tear gassed students – who were earlier seen hugging officers as part of the protest – only to be met with desperate shouts of “no violence.” Gas was used in the Caribbean city of Barranquilla first and within an hour police aggression was reported in Bogota, Cali and Medellin. At least one journalist was also attacked.

In the face of yet another week of protests and a day that bring with it more violent clashes, Duque defended the budget, saying that when his administration took the baton in August they “received a historic debt with education” from his predecessor, Juan Manuel Santos, one that they couldn’t resolve in just 100 days in office.

To the universities, we have made a very big effort to commit resources to strengthen the base for their funding. We have made a monumental effort.” he said. “The commitment is total, but I do believe that we should seek an agreement among all Colombians for the quality of education and I am ready to move forward in that measure.”

Despite Duque’s continued defenses, students have made a vocal effort to keep demonstrations going.

“The fight is not for us, it is for those who come and for those who stay outside,” said Alejandro Palacio, president of the Colombian Association of Student Representatives for Higher Education (ACREES). “We are going to transform education in Colombia.”