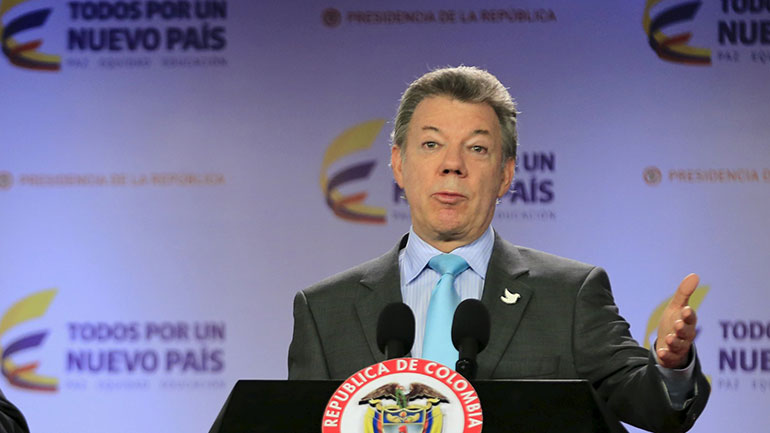 Colombia will vote on FARC peace deal in May or June: Santos

Colombia President Juan Manuel Santos said Thursday that the country will vote on a pending peace deal with FARC rebels in May or June next year. However, in which form is still uncertain.

“In May or June of the coming year there will be a plebiscite over peace,” Santos said, adding that “some will be happy and others not so” about the popular vote.

The FARC and the conservative opposition want a constituent assembly while the coalition and government are considering either a referendum or a plebiscite.

Santos told the FARC to “come off their cloud” in regards to a constituent assembly that could change Colombia’s entire constitution rather than just the parts regarding peace.

Some congressmen from the U Party have proposed a plebiscite to ratify the peace deal in the event it is agreed upon by the State and the FARC but the details are still to be agreed upon at the Senate.

The details are important because the efforts of the last three years of negotiations will either fail or triumph, depending on the way the electorate vote at the ballot boxes.

President Juan Manuel Santos has agreed that a plebiscite would be the “most convenient” way of ratifying the peace deal, although the FARC are not in agreement with the mechanisms for the referendum.

Colombia congress to decide how to seal peace deal

According to current law, or a plebiscite to become valid the referendum must count on the approval of 51% of the electorate.

Currently the electoral roll is made up of 33,820,199 citizens, so for the peace deal to become valid the referendum would require an affirmative majority of 16,910,099.

For Humberto de la Calle, chief government negotiator in Havana, this requirement is “excessive” and contrary to the Colombian electoral trends where participation in elections usually barely reaches half of the electoral roll.

Therefore de la Calle has asked the Congress to consider lowering the threshold but not so that it is too “bland.”

“We hope that the Congress in its good judgement takes into account that an adequate threshold (for a plebiscite) can’t be too low, too bland. Reasonable demands must be upheld that are also practical, but that the people’s will also has legitimacy. I am confident that Congress won’t approve a weak plebiscite. We want a serious and legitimate plebiscite,” said De la Calle.

Senator Armando Benedetti (U Party), the leader of the proposers of the bill, accordingly suggested the threshold should be lowered to 13% which would mean an affirmative vote from 4,396,625 citizens would ratify the peace deal.

Former president, Alvaro Uribe, a staunch critic of the peace process, questioned the efficacy of the referendum, saying, “it covers all topics in one and Colombians have no other option than to say yes or no. A Colombian who says I am with peace but not with impunity, is not allowed to speak out.”

According to the bill the referendum would not be obligatory and fines will not be issued to those who do not vote.

The government will have to accept the outcome of the referendum, “in the case that ‘no’ triumphs it will be the end of the peace process,” explained Benedetti.

The bill will pass through the first debate at the Senate next week.