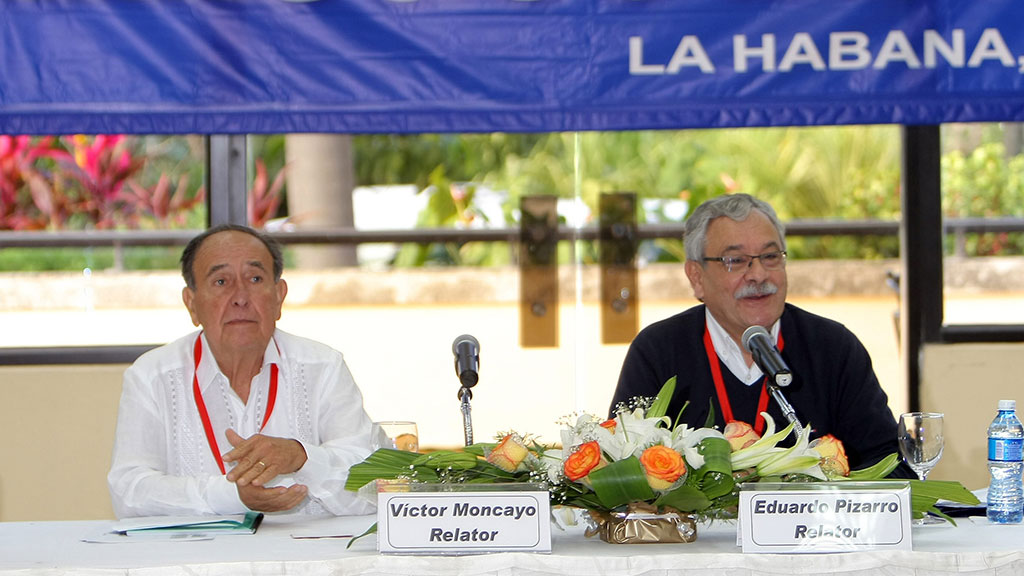 A commission of 12 Colombian historians presented their account on the origins, causes, aggravators and consequences of Colombia’s 50-year long armed conflict on Tuesday. The document lies the foundation for determining responsibility for the nearly 7 million victims.

The historians that took part in the study had been approved by the delegations of both the government and the FARC, Colombia’s largest rebel group that is currently negotiating peace.

The 800-page report was presented by the commission’s two rapporteurs, former National University rector Manuel Moncayo and the current ambassador to the Netherlands, Eduardo Pizarro.

The presented report did not reveal one “historic truth” or one “official history” but clarified where the scholars had found consensus and where they differed in opinion, the rapporteurs told press in Cuba where the talks are held.

For example, one scholar explained the causes of the conflict claiming its origins date back to the 1920s, while others agreed that its primary origins lie in “La Violencia,” a ten-year period of extreme partisan violence that began in the 1940s.

Other scholars disconnected less recent historic causes from the surge of guerrilla and paramilitary groups in the 1980s that resulted in a massive increase in victimization.

The theses in the report should “contribute to the peace talks, and multiple and plural debates” about “what happened, why it happened, what consequences it had and, more importantly, how to overcome it and how to avoid repetition,” said Moncayo.

According to Pizarro, the report is “fundamental to understanding the complexity of the conflict and the responsibilities of those who have participated or had an impact on it, and to clarify the truth.”

Moncayo said the report “clears the paths towards the truth about the conflict.”

“The truth is not only with those who have been witnesses or actors in the conflict, nor with an exclusively judicial truth … [but] it is the explanation of a combination of very complex circumstances that have happened over the course of the years and have driven us to this reality,” said the scholar.

All twelve members of the commission agreed that the ongoing peace process initiated by the administration of President Juan Manuel Santos and the FARC was elementary to obtain “a post-conflict situation in peace.”

The scholars also agreed that among the main causes of the conflict are decades of injustice in the countryside and the historic inability of leftist political forces to assume political power without the use of violence.

The full report was published on the website of the peace talks, while the website Reconciliacion Colombia, founded to promote reconciliation in the South American country, published an executive summary of all twelve theses.

The negotiation teams of the government and the FARC are currently determining mutual responsibility and how to adequately attend the millions of victims generated by the conflict.

The warring parties have been engaged in peace talks since November 2012. Since then, the negotiators have agreed on a resolution of a number of causes of the conflict like political participation and rural inequality. Agreement was also found on the issue of drug trafficking, one of the main aggravators of the conflict.

If the negotiation teams are able to find agreement on victims and the end of conflict, the FARC will end its 50-year war and pursue its political goals through non-violent, democratic means.