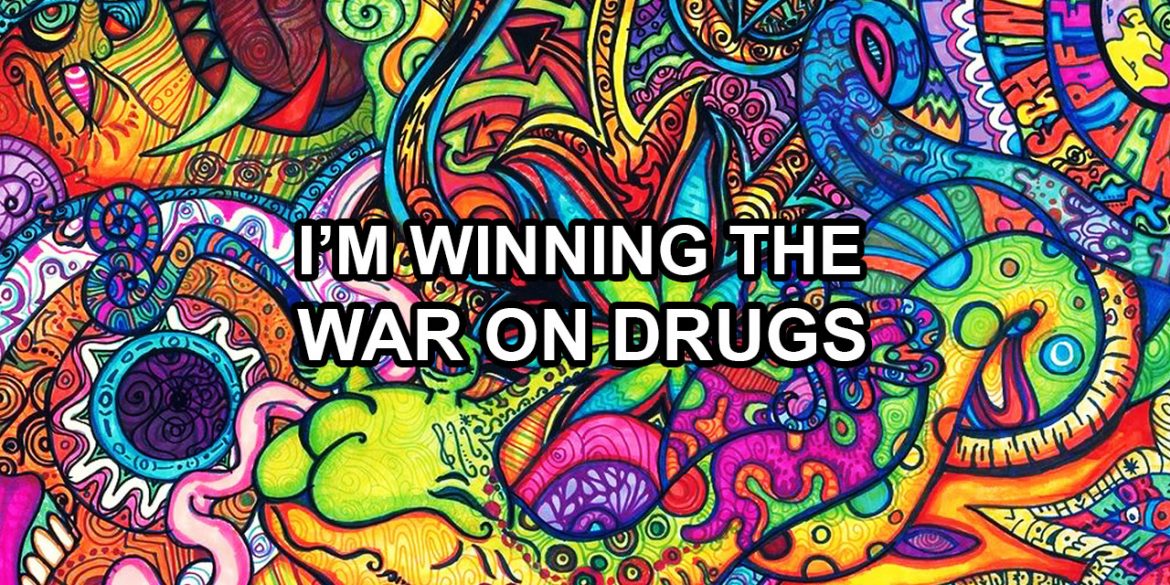 I signed up for the War on Drugs because I want to be a winner, unlike my murdered friend and the two American former interns who died of an overdose. They lost.

Almost 50 years after late US President Richard Nixon declared the War on Drugs, the Drug Enforcement Administration (DEA) and Latin America’s narcos are doing better than ever.

The rest of the world agrees the United States’ drug policy is a racket, but try explaining that to the Washington DC pen pushers and the narcos who now have billions of dollars to celebrate their scam’s 50th anniversary.

One of the holes where American tax payers’ money goes

The narcos have every reason to celebrate as they are trafficking more drugs than ever before. The DEA has every reason to  celebrate because they are ripping off the American people for $3.1 billion a year without doing anything.

As a former loser in the War on Drugs I don’t have that kind of money. Fortunately, now that I have joined the war I get drugs for free.

People will stand in line to feed you doobies, smarties and benzos when you say you want to write a column while off your tits on drugs only to debase feds and their so-called War on Drugs.

Ironically, I am now too wasted to remember what day it is, but one cannot be wasted enough to win the War on Drugs.

I got nothing against drugs. I think it’s a personal choice, just like alcohol and cigarettes, just as long as that personal choice doesn’t infringe on the freedoms and other people’s personal choices. Really, that’s the end of the story. That’s called logic, it’ll help you.

George Bush says: “We’re losing the War on Drugs.” Do you know what that implies? There’s a war going on and people on drugs are winning. What does that tell you about drugs? There’s some smart, creative motherfuckers on that side. They’re winning a war and they’re fucked up!

Had the DEA’s $3.1 billion budget gone to healthcare like in developed countries, my dead American former interns may have gotten the help they apparently needed.

Had the DEA not colluded with Medellin drug trafficker “Don Berna” and the Cali Cartel my late colleague’s brains may still be inside his skull.

“If you make a deal with one bad guy to take down another bad guy. What’s wrong with that?” I heard this gloating DEA prick say on Netflix the other day.

The answer is that when counternarcotics officials collude with narcos they the DEA becomes their plaything. Ask “El Tuso,” his drug trafficking even got him a green card.

“Plan Colombia” was supposed to deprive organized crime of their drug trafficking revenue, which became became a $10 billion failure, yet the ignoramus who invented it, Philip Goldberg, was promoted and is now the US ambassador in the country he helped ruin.

Goldberg now pretends to be fighting drug trafficking with a government that has more ties to the now-defunct Medellin Cartel than I have had girlfriends.

While asking US Congress for more budget to fight drug trafficking, the US Embassy refuses to answer any of my questions related to criminal investigations.

I’m probably blacklisted or something and I didn’t even ask why no narco has been arrested in years.

I did reveal that Pablo Escobar’s cousin was hanging out with former ambassador William Brownfield before he became Assistant Secretary of State for — don’t laugh — the Bureau of International Narcotics and Law Enforcement Affairs.

Brownfield even won a Distinguished Service Award and three Presidential Performance Awards despite having secured a Medal of Freedom for another former Medellin Cartel associate.

Meanwhile, I was trying to overcome the deaths of my former colleague and former interns, but my days of losing this war are over.

It took pharmaceutical companies Novartis and Roche and my friend’s homegrown weed some convincing, but I have decided to become an active combatant in the War on Drugs.

I may be high as a fucking kite, but I believe I am winning and I no longer feel pain.

P.S. After sobering up I realized I don’t want to be a racketeer like Goldberg or Brownfield and don’t want to be responsible for the deaths of innocent people who either succumb to addiction or are assassinated for confronting organized crime and corruption. I’ll just continue losing this stupid war.