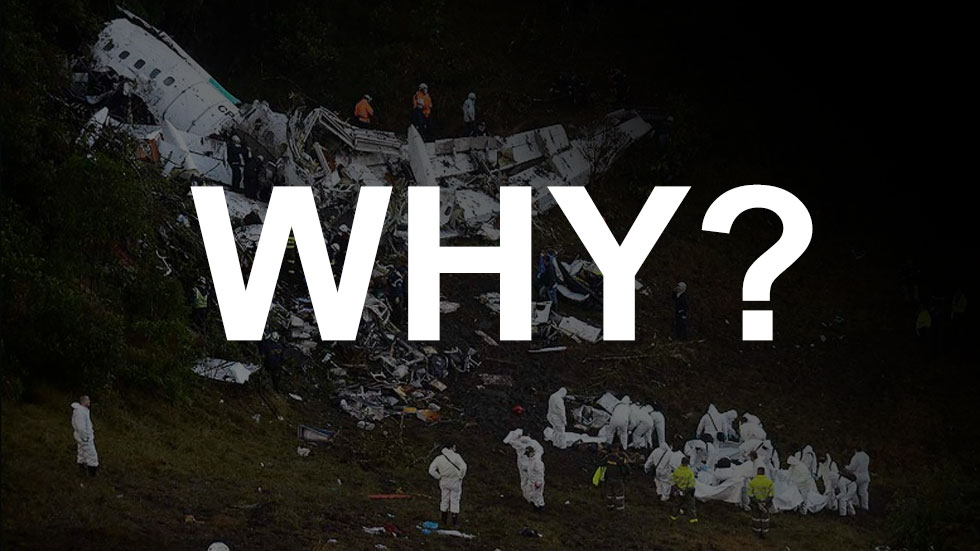 Fuel shortage ‘most probable cause’ of Chapecoense plane crash in Colombia

A lack of fuel is “the most probable cause” of the tragic airplane crash in Colombia’s that killed 71, including most members of Brazilian soccer team Chapecoense, according to civil aviation authorities Tuesday.

The plane crashed while on course to the landing strip of Medellin’s Jose Maria Cordova airport after having been asked to circle over the airport due to a technical problem reported by a Viva Colombia plane that was supposed to land around the same hour.

Initially, Colombia’s civil aviation authority Aerocivil claimed the crash was likely due to a technical failure, but amid increasing reports the plane had run out of fuel, Aerocivil director Alfredo Bocanegra admitted that “fuel most probably is what caused this tragedy, but still, nothing is confirmed.”

Since the crash on Monday 10PM local time, the authorities have found the two black boxes that should contain information on the technical causes of the crash and the conversations between the cockpit and the control tower of Medellin’s international airport.

Bocanegra’s claim was confirmed by Juan Sebastian Upegui, the co-pilot of an Avianca flight that was also waiting for authorization to land as a Viva Colombia aircraft had been granted priority after calling an emergency.

However, the plane that had flown from Bolivia seemingly lacked the necessary fuel to make the extra rounds before landing.

Avianca would not confirm Upegui’s testimony that had gone viral on social media on Tuesday, stating the audio describing the final moments before the crash was personal and not a corporate statement.

We were just silent, silent, silent…I remember I laid my head on my arms rooting for him, going like “do it, do it. Land, land” and I said “Fuck, the guy’s at VOR at 9,000 feet, he’s gonna kick the bucket, and I began to hold tight and the guy continued: “Help us! Vectors, vectors! Give us vectors to proceed to the strip. Vecto…..” and that was it … the controller lost it and we began to cry.

In an interview with CNN, Airloineratings.com editor-in-chief Geoffrey Thomas said “we do know there was no fire when the plane impacted the ground, which may be one of the reasons where there are survivors from this terrible tragedy.”

Air safety investigator Grant Brophy told the television news network that a plane running out of fuel is “very, very rare in commercial aviation terms because there are so many checks and balances to make sure you have enough fuel on board.”

While Medellin authorities made a call for Portuguese-speaking locals to report themselves and help receiving arriving family members of the crash victims, airliner LaMia of the crashed LMI 2933 flight sent their attorney to Colombia’s second city.

Atletico Nacional, the team that would play Chapecoense in the first leg of the final of the Copa Sudamericana, will hold a special service for the victims on Wednesday evening at the original hour of the game.

The team on Tuesday rescinded their aspirations to the soccer title, asking South American soccer federation Conmebol to grant the title to Chapecoense “in posthumous homage to the victims of the fatal accident that impute our sport. For our part, and forever, Chapecoense are champions of the 2016 Copa Sudamericana,” the Medellin side said in a statement.