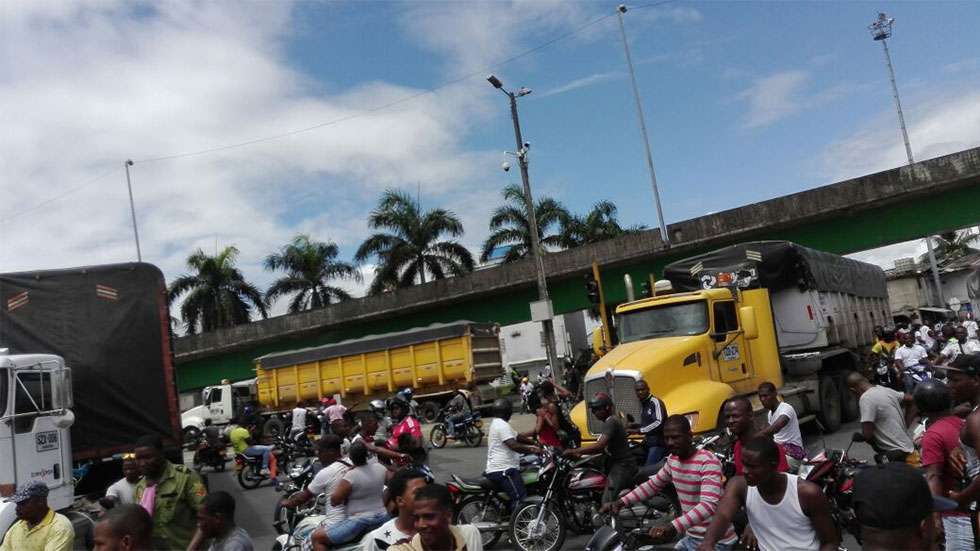 After more than a week of protests, the people of Buenaventura on Wednesday took to blocking the country’s largest port, allowing not one truck to either enter or leave.

After decades of state abandonment and neglect, the citizens of Buenaventura decided to hit the national government where it hurts the most, blocking the port that annually delivers $2 billion in royalties to the national treasury.

Consequently, all trade coming through the port, responsible for half Colombia’s imports and 5% of the country’s exports, has come to a halt.

Locals blockaded the port immediately after talks between representatives of the community and the government was suspended for the second time in a week.

Hundreds of Buenaventura inhabitants took to the port and blocked the entrance, refusing to allow any truck to come either in or out of the port.

This in an unprecedented act of defiance of a ban on public manifestations imposed by the city’s mayor, Eliecer Arboleda, who is currently investigated for allegedly presenting a fake high-school diploma.

Last time talks broke down, police opened fire at the tens of thousands of families taking part in the protest. This time around, the locals acted before the police and took immediate and radical action.

The cost of the latest escalation of protests is tremendous. Every day, 5,000 trucks enter and leave the port. According to conservative news network RCN, the local chamber of commerce said the cost of the protest and the blockade already had cost local businesses more than $24 million.

The ongoing blockade of of the port costs the government almost $55 million a day in missed royalties a day as port authorities have been forced to suspend all commercial activity.

The locals are close to revolt because, while their port generates major revenue for shipping companies, drug traffickers and the national government, the city is submerged in extreme poverty and violence.

President Juan Manuel Santos was unable to immediately respond to the escalation of protest. The head of state is in Ecuador to attend the inauguration ceremony of the neighboring country’s new president, Lenin Moreno.

The latest escalation in Buenaventura adds to a series of ongoing strikes, major anti-government protests and ongoing social unrest that have increased over the past week, overwhelming the national government that has failed to reach agreement with any of the striking sectors.