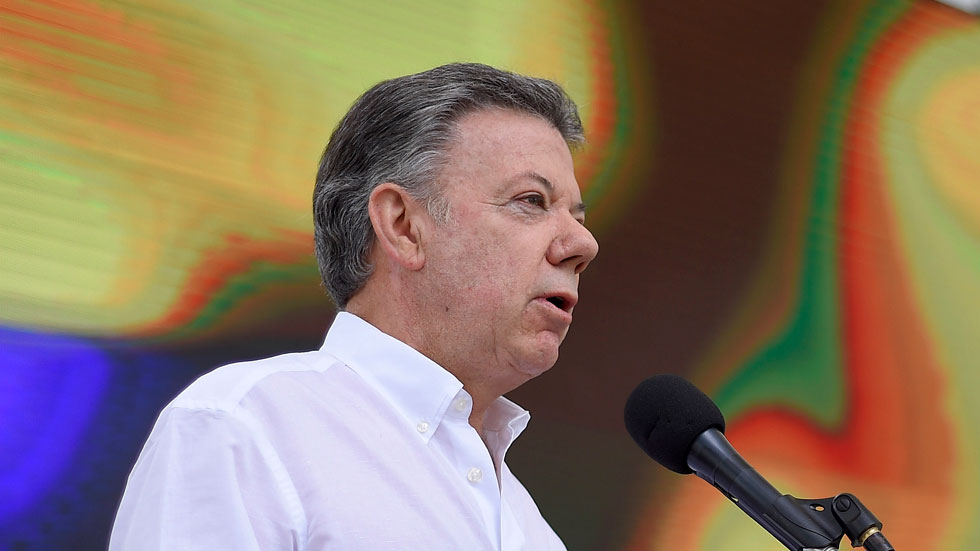 Colombia President Juan Manuel Santos praised the FARC‘s abandonment of arms during the ceremonial end of the disarmament of some 7,000 guerrillas, whose group had been at war with the state for more than half a century.

The ceremony was attended by top government officials, the FARC leadership and the mission chief of the United Nations, the international organization that monitored a 10-month ceasefire and monitored and verified the FARC’s effective abandonment of weapons. 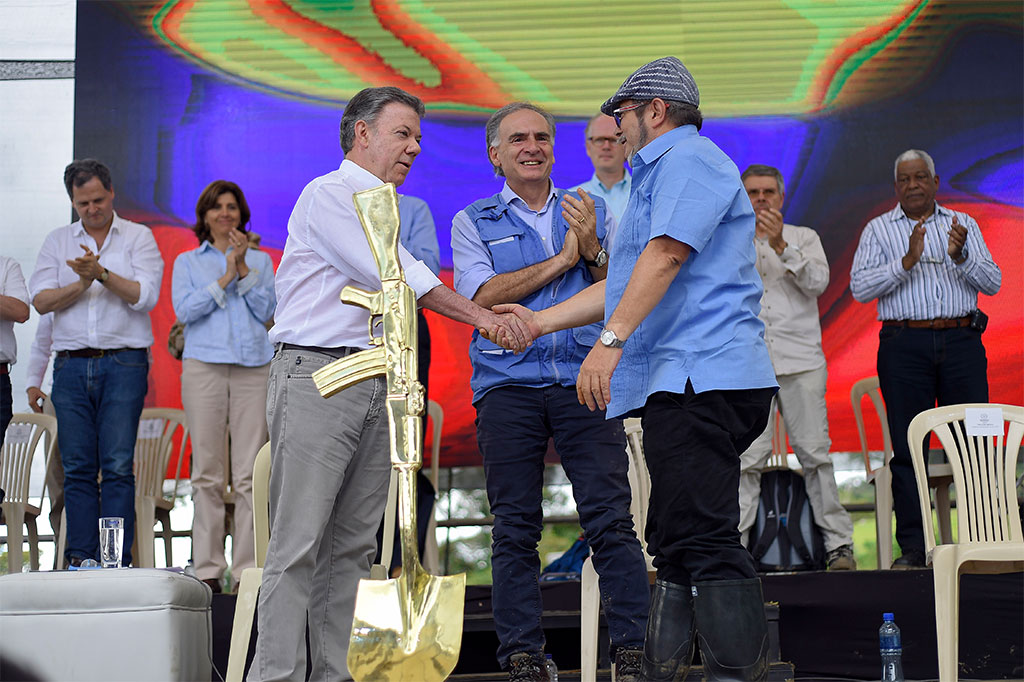 Today, June 27, for me and for Colombians is a very special day, one we will never forget, the day in which arms turned into words. I can tell you, from the bottom of my heart, that for living this day alone, it’s been worth having been president of Colombia.

Ahead of the ceremony with the FARC, Santos, his defense minister and the military command attended a ceremony to pay respect to all Colombian soldiers who had fallen in the 52 years of armed conflict between the State and formerly the country’s oldest and largest guerrilla group. 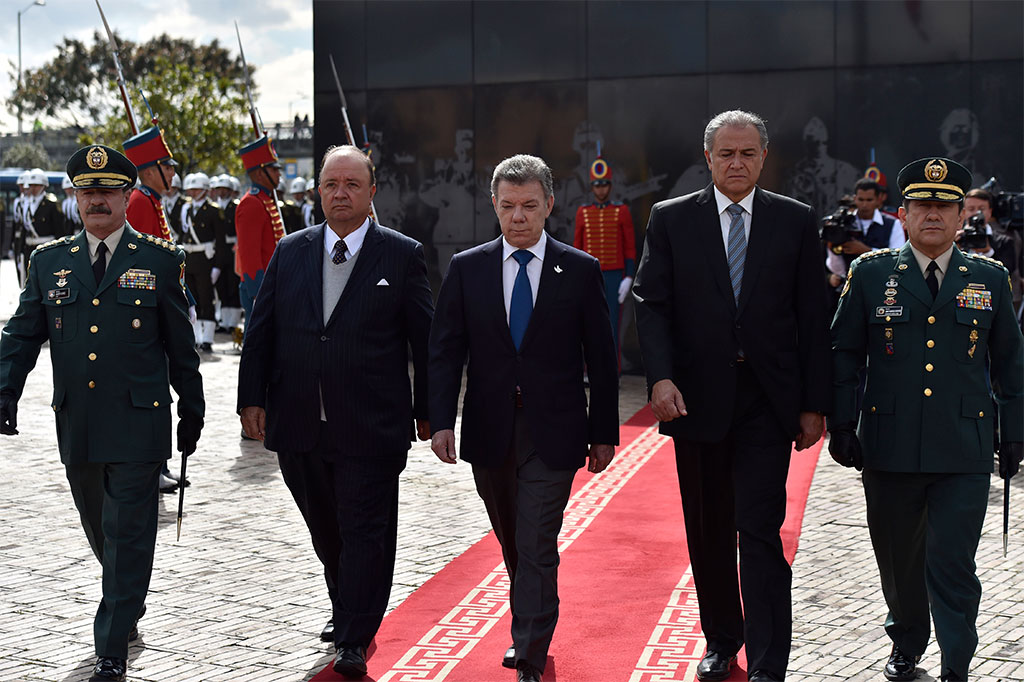 Santos and the military leadership pay ceremony to soldiers fallen in the armed conflict with the FARC.

At the military ceremony, Santos thanked the “heroes of Colombia. We owe you our freedom.”

How much we all, more than 49 million Colombians, owe to the thousands of men and women of our security forces, of our Army, of our Navy, of our Air Force, of our Police, who have given their lives for our freedom and our democracy.

While the ceremonial end of the FARC’s disarmament does mean the FARC’s guerrilla force is disarmed, some weapons and hundreds of weapons caches have yet to be removed.

The only weapons currently left in hands of FARC members are those in the hands of guards maintaining security in these camps. These weapons must be surrendered to the UN before the agreed deadline of August 1.

All other guerrillas that have handed in their weapons have received certificates, allowing them to take part in reintegration programs. 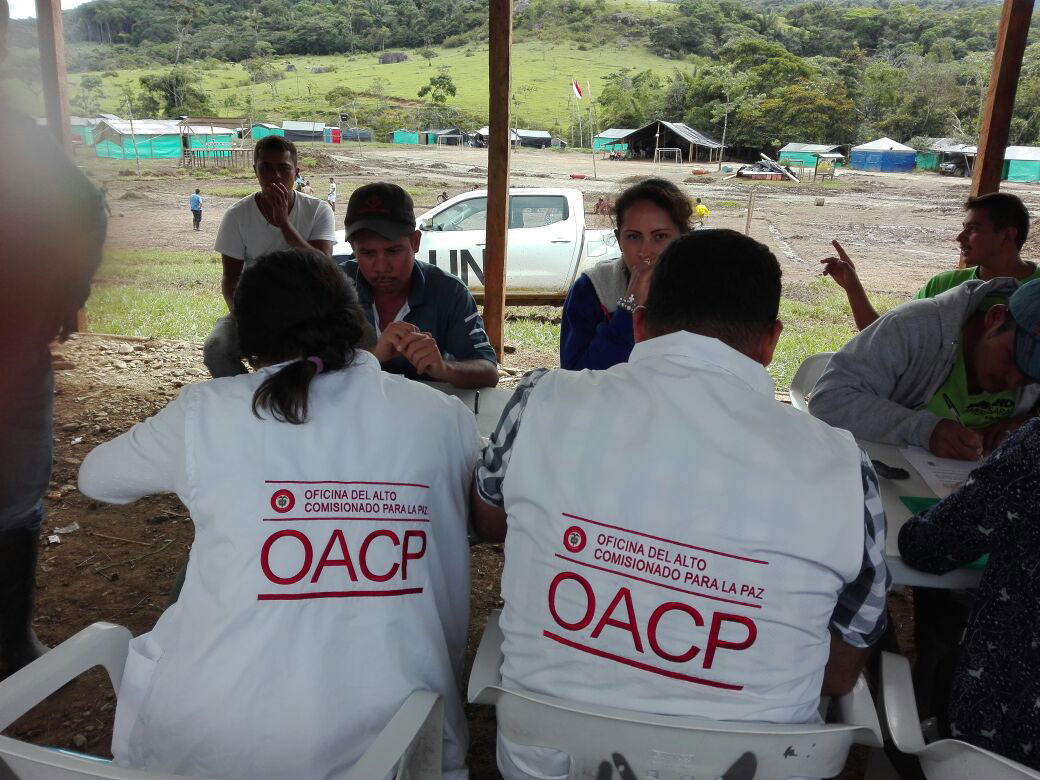 FARC guerrillas receiving the papers certifying they are now normal members of society.

Some 1,600 FARC militia members, not all of whom were armed, have also reported at the camp to receive a certificate they are now no longer a member of an illegal armed group.

Guerrillas who have deserted or militias members who have failed to report themselves will no longer be able to take part in the peace process and will be targeted by the Colombian security forces.

Of the FARC’s approximately 50 fronts, six have refused to take part in the peace process. The dissident groups are primarily active in the coca-rich south and southwest of the country.

With the full disarmament of the FARC’s guerrillas, Colombia’s peace process has successfully finished a historic phase of the country’s ongoing peace process that seeks an and to more than half a century of political violence that has left more than 265,000 Colombians dead, tens of thousands missing and 7 million displaced.

The peace process has been plagued by a number of delays, partly due to government failures to timely facilitate the disarmament and disinformation campaigns by the country’s hard-right opposition, which — like the FARC — is expected to respond for tens of thousands of human rights violations.

Additionally, the process has been stained by the ongoing assassination of social leaders and members of FARC members, and an apparent spoiler attack on a Bogota mall little over a week ago.

The following phase of the peace process includes a transitional justice tribunal that will call an unknown number of FARC guerrillas and militia members, 24,500 state officials and almost 13,000 private individuals and companies to respond for the tens of thousands of war crimes committed by the multiple parties during the armed conflict.