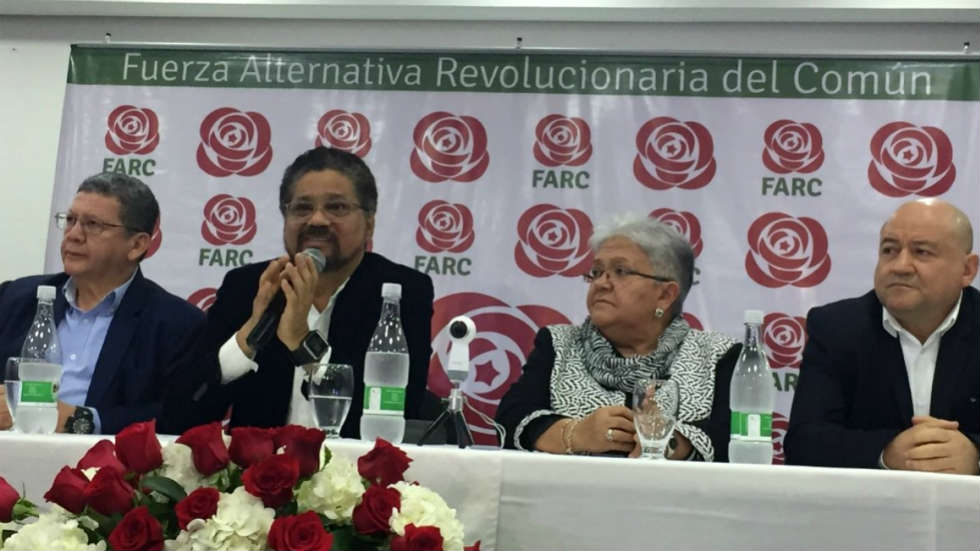 The FARC political party announced its 2018 candidates for Colombia’s congress and the presidency on Wednesday, one day after the political party founded by former rebels received official recognition from the state.

On Tuesday Colombia’s National Electoral Council, the state entity that regulates the country’s elections and all of its political parties, formally recognized “the legal status of the political party Alternative Revolutionary Force of the People.”

From FARC to FARC

The formation of the FARC political party follows from a peace agreement made a little less than a year ago between the national government and the country’s largest rebel group at the time, also called the FARC.

In exchange for laying down their arms, the former rebel group received the right for all of its members, including those who have standing charges of crimes against humanity, to participate in Colombia’s electoral process.

Colombia’s High Commissioner for Peace, Rodrigo Rivera, tweeted this week that the political participation of the FARC will allow the country to advance in its construction of peace.

With this recognition today of the legal status of the new party that emerges from the reincorporation of the FARC, #ConstructionOfPeace advances.

Meanwhile, former president of Colombia and current senator for the Democratic Center party, Alvaro Uribe, claimed he has evidence that the FARC’s political party is working on behalf of dissident FARC members, or those former guerrillas who refused to take part in the peace process and in effect became armed criminals.

The former president’s claim has been repeatedly rebuked by analyses of the peace process carried out by government ministries and the UN.

On Wednesday, less than a year after the peace process began, the FARC published their list of candidates for the presidency and Congress.

Their presidential candidate, Rodrigo Londoño, formerly known by his nom de guerre, “Timochenko,” was the rebel group’s chief commander from 2011-2016.

His vice presidential running mate, Imelda Daza, is a social democrat who has been living in exile in Sweden since the 1990s.

Londoño currently faces criminal charges such as homicide, kidnapping and forced recruitment of minors amounting to 448 years in prison. In the United States Londoño is considered a wanted narcotrafficker and chief of a designated Foreign Terrorist Organization.

The chances of Londoño winning the elections are slim as most Colombians disapprove of the man who was the country’s most wanted terrorist until last year.

In 2016, the FARC said they would not take part in the 2018 elections, but instead would endorse a mainstream candidate who would guarantee the success of an ongoing peace process. 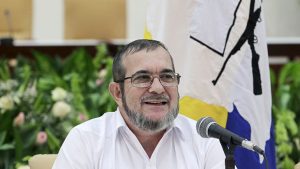 All members of the former rebel group are eligible to participate in politics, even those who confess to committing war crimes, according to the Final Peace Agreement.

For the FARC, political participation of its members has always been a top demand, one which the government has largely upheld.

Even after the government had to alter the peace agreement following the failed plebisicte in October 2016, political participation for all FARC members remained a non-negotiable point.

The agreement is not the first time a government conceded political participation to former rebels. Great Britain and Ireland agreed to it with members of the IRA, and El Salvador, Guatemala and other countries have all made similar agreements.

In order to participate in politics, FARC members accused of war crimes must participate in the new transitional court system designed by the peace agreement.

In that system, top leaders of the FARC may receive reduced punishments, like confinement to a community area for a period of up to seven years, if they make full contributions to “truth, reparations [to victims] and [agreements of] non-recurrence.”

That means FARC leaders could potentially confess to having committed war crimes while campaigning for or holding elected positions.

It also means they could carry out their reduced sentences while holding an elected position.

Right now, Colombia’s Congress is debating a bill to implement that court system, and some lawmakers want to impose a rule stating that FARC members cannot participate in politics until they complete the requirements and any punishments imposed by the special court.

Such a rule, although it would shift away from the language of the peace agreement, could satisfy many Colombians who dislike the idea of FARC leaders acting in politics while participating in the special court system.

In addition to listing Rodrigo Londoño as their presidential candidate for 2018 elections, the FARC also listed 11 candidates for congress.

The former rebel group’s political party has to participate in normal elections as all other parties do, but they will have special guarantees in congress if they lose.

For example, if the FARC only wins the election for one seat in the House, then an additional four seats will be added to the House and given to FARC representatives, making a total five seats held by the new political party.

On the other hand, if the FARC wins elections for five or more seats in the House, then no additional seats will be added to the House because the party will have already reached their five-seat minimum.

The five-seat minimum for the FARC in the House and Senate will only apply for two electoral periods, lasting until 2026.

This upcoming year, the FARC’s congressional campaign will be led by Luciano Marin (nom de guerre “Ivan Marquez”), a former commander of the rebel group who was elected to the House of Representatives in 1985 in the Caqueta province.

The FARC’s approval rate is only nine points behind President Santos’, and only one point behind Trump’s.

Member of the Communist Youth. Represented Caqueta in the House as part of Patriotic Union (UP) party in the 1980s. Took up arms with the FARC during the political genocide of the UP. Was a member of the FARC Secretariat and acted as the rebel group’s chief peace negotiator in Havana.

Member of the Communist Youth. Was a guerrilla for the M-19 rebel group before meeting members of the FARC in Moscow. Became a member of the FARC secretariat in 2008. Was the member who initiated peace dialogues with the government.

Member of the FARC for 39 years. Chief of communications for the rebel group, and participant in the peace negotiations in Havana.

Joined the FARC in 2000, during the failed peace talks in Caguan. Guided the gender-related peace negotiations in Havana.

Was a partner of former FARC commander Manuel Marulanda for 24 years. Has had a role in all FARC peace negotiation attempts.

Was commander of the FARC in the Choco province, and participated in the peace negotiations in Havana.

Was the right-hand-man to former FARC commander “Mono Jojoy.”

Was commander of the FARC’s 36th Front. Initiated a de-mining pilot project in Briceño, Antioquia as part of the peace process.

Spokesman for the FARC in Mexico between 1993 and 2002. Participated in the peace negotiations in Havana.

Was member of the FARC’s high council and commander of the Caribe Block.

Was a member of the FARC’s Magdalena Medio Block.