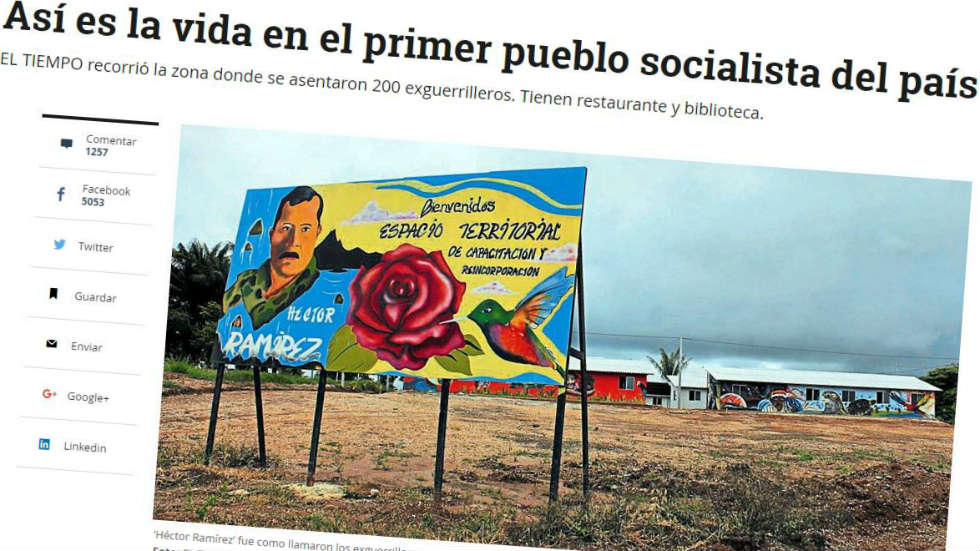 The reintegration of FARC fighters is currently being monitored by the United Nations, which has already criticized the government for failures.

However, in some regions the reintegration of fighters is a success. The commercial projects carried out by the former fighters even attract tourists and shoppers from the region.

El Tiempo, the newspaper once founded by the great-uncle of President Juan Manuel Santos, visited the FARC transition camp in La Montañita, a remote municipality in the southern Caqueta province.

In the camp located in the Agua Bonita township, some 200 former FARC fighters have effectively founded “the first socialist town in the country” as part of their reintegration process after half a century of war.

The commune is similar to those in developed countries in Europe where tiny communist villages have existed since the beginning of the 20th century.

When news website La Silla Vacia visited the camps just weeks ago, 100 of the original 300 demobilized FARC members had left the camp.

Newspaper El Tiempo reported on the 200 former combatants who stayed and turned their demobilization camp into a farmers’ commune where Marxism has been put to practice.

The former fighters formed a Utopian cooperative in which the workers also are owners of the commercial enterprises set up in the township, and with reported success.

A former coca cultivation hotspot, Agua Bonita’s commercial activities now consist of pineapple, plantain and yuca plantations. Additionally there is a cock fighting ring, a soccer field and a court to play the traditional game of tejo.

What is maintained is strict discipline. Each former guerrilla begins work early in one of the collective projects created by them.

To start up their commercial activities, the former guerrillas used half of the two million pesos ($700) stipend they received from the government.

“What we did was create a fund. All of us put up a million pesos and with this we began constructing these small collective projects,” Ximena Narvaez of the former guerrillas’ territorial reintegration council told El Tiempo.

Here we work collectively. Each person has a role. We put some people in charge of attending the productive projects. In the assembly it is approved who will manage the bakery, who will manage the restaurant, and the profits that this business produces are for the collective, to solve the priority needs.

Unlike in places where guerrillas did not invest their stipend, tourism and trade with nearby communities have made Agua Bonita increasingly self-sufficient.

The former guerrillas will receive a monthly stipend of $200 for another year after which they will be fully reliant on their own commercial activity.

Also these subsides are reportedly used to invest in the development of the town and its economy.

According to the former fighters, especially the development of tourism activities is making their dream of creating a self-sufficient community a realistic possibility.

“This week’s agenda is already booked full,” one of the organizers of the tourist outings told the newspaper.