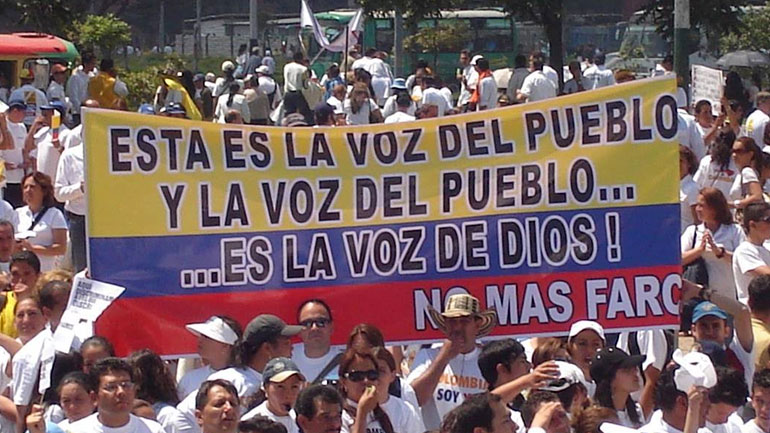 Colombia’s urban dwellers continue to be highly pessimistic about the outcome of ongoing peace talks with FARC rebels despite concrete steps to deescalate the conflict, according to a recent poll.

According to a poll held by Ipsos-Napoleon in the country’s cities that are generally unaffected by the armed conflict, no more than 29% of people feels optimistic that the talks that have been taking place in Cuba since 2012 will result in a peace deal and the effective demobilization of the FARC.

A record 69% said to have no faith the peace talks will result in peace, while the remaining 2% was undecided.

The lack of faith in the talks remained the same as in April when the FARC violated their unilateral ceasefire by killing 11 soldiers in a surprise attack. This attack was the first of a series of armed actions that led to the FARC’s suspension of the ceasefire on May 22.

The increase of violence spurred the intervention of guarantor countries Cuba and Norway who brokered new attempts to deescalate violence while negotiators deal with the final two points on the five-point agenda, Victims and End of Conflict.

However, the resumption of the FARC ceasefire and the government’s concession to abstain from carrying out airstrikes has failed to restore confidence, the poll indicated, mainly because urban Colombians have no faith that this time the FARC will effectively uphold their ceasefire.

The main obstacle faced by the peace talks is the lack of credibility of both the FARC and President Juan Manuel Santos.

According to the poll, 81% of urban Colombians does not even believe the FARC has engaged in the peace talks in order to obtain peace while 75% said that Santos has failed to live up to promises made while campaigning for reelection in 2014.

If the vast majority of urban Colombians is proven wrong and peace is reached, the parties now at war face another obstacle, a referendum to approve the concessions made during the negotiations.

For example, 74% of Colombia’s urban population rejects the possibility of FARC members taking part in politics, a key element of agreements already made. No more than 24% of the interviewees agree with the FARC’s participation in politics.

What urban Colombians oppose the most is the possible impunity for crimes committed during the more than 50 years of armed conflict. According to Ipsos Napoleon, a staggering 90% of Colombians think FARC leaders should go to prison.

The poll did not ask whether urban Colombians want state officials accused of thousands of war crimes to go to prison.

Colombia’s peace talks began in November 2012 and have since resulted in partial agreements on rural reform, the FARC’s participation in politics and the rebels’ abandonment of drug trafficking, one of their main sources of income with which they finance their uprising.

If the talks are successful, the FARC will end their 51-year-long violent uprising and promote their Marxist ideals politically through non-violent means.