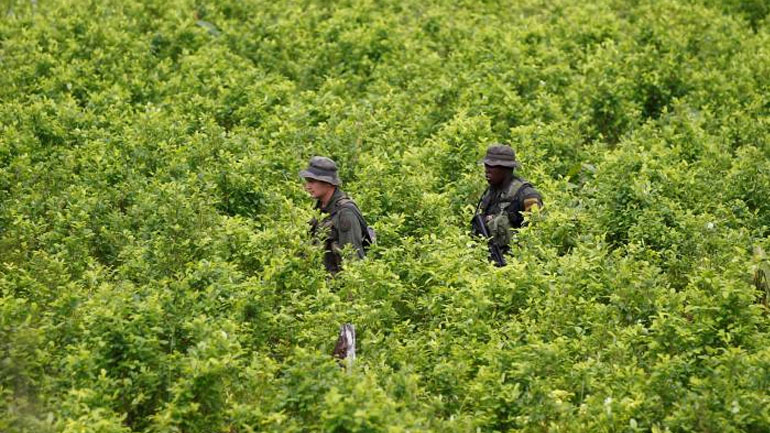 FARC proposes to implement anti-drug deal made with Colombia government

Rebel group FARC, one of Colombia’s illegal armed groups most involved in drug trafficking, on Sunday proposed to begin the implementation of a deal made with the government to curb the drug industry.

The accord on illicit drugs the FARC wants to begin implementing is one of the partial agreements made during peace talks with the government that have been ongoing since November 2012.

The FARC made the surprising announcement only days after the United Nations’ Office on Drugs and Crime (UNODC) released a report highlighting that coca cultivation grew 44% last year and Colombia’s potential cocaine production went up 52% to 487 tons a year.

The UN report “highlights the failure of fumigation and forced manual eradication, as well as the need to redirect the efforts of the Colombian state’s counter-narcotics policy,” said Carlos Antonio Lozado, one of the FARC’s negotiators, top commanders and members of the rebel group’s highest political body.

The FARC, which for decades has used the “taxing” on coca cultivation and drug trafficking to fund its war against the state, proposed to move ahead with the agreement made on drugs and their abandonment of the illicit business ahead of signing a final peace deal.

Lozado said the FARC is willing “to agree with the government of President [Juan Manuel] Santos, and with full cooperation of the communities, on the necessary procedures to from now on put into force point four on the agenda of Havana,” Cuba where the talks are held.

“There is nothing in the reached agreements that can’t be realized within the framework of existing laws. Their application therefore is mainly a matter of political will,” the rebel leader said.

“The way we see it, the partial accord on point 4: Solution to the Problem of Illicit Drugs, contains all the essential elements with which you can construct a comprehensive plan for the substitution of these crops in the entire national territory,” said Lozado.

“A step in this direction, accompanied by other gestures of deescalation that should shortly bring both parties to agree to a definite suspension of armed action, would not just return the confidence and the credibility of the [peace] process, but put them at a new level, safe from pressures and provocations of its enemies,” said the FARC leader.

The FARC became Colombia’s largest and arguably wealthiest rebel group as they began tapping into the major profits made in the country’s illicit drug drug industry in the 1970s and 80s. Consequently, an effective policy to replace coca crops with legal crops could undermine their finances.

However, as the conflict progressed and the pressure on drug trafficking grew, the guerrillas found other ways to finance their war against the state and have since depended for a large part of their income on the similar taxing of illegal mining operations.

In spite of having made deals on political participation and drug trafficking, negotiations have been stuck and suffering a decrease in credibility as the warring parties seem stuck on the last two points on the agenda: Victims and End of Conflict.

In these two points, the parties will have to define who takes responsibility for the nearly 7 million victims of the violence and how to punish those who have been guilty of war crimes.

Both parties are accused of thousands of war crimes and human rights violations in the more than 50 years of armed conflict.