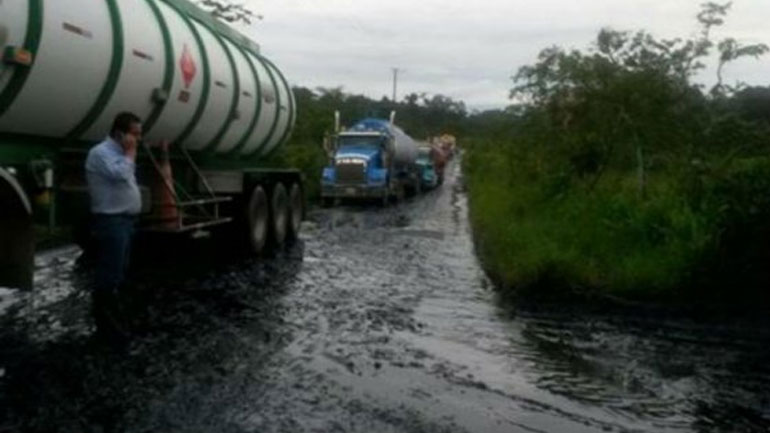 Colombia’s largest rebel group, the FARC, on Monday allegedly stopped a caravan of 25 oil trucks, forcing 19 of them to dump their crude oil in the middle of the Amazon jungle.

The incident reportedly happened in Puerto Asis, a municipality in the oil-rich Putumayo province in the south of the country.

According to the Defense Ministry, members of the FARC’s 48th Front stopped the caravan at a rebel roadblock between the villages of Puerto Vega and Teteye.

The government did not disclose why the FARC forced the truck drivers to spill the oil, but fiercely rejected the alleged act, saying it “negatively affects natural resources and the community.”

“This is not will for peace, it just does harm to Colombia,” the ministry tweeted.

Ever since the FARC on May 22 suspended a self-imposed unilateral ceasefire, the guerrillas have retaken attacks against the security forces, energy and road infrastructure and the oil industry.

The guerrillas have been engaged in peace talks with the administration of President Juan Manuel Santos since November 2012.

While no agreement has been reached over a cessation of violence for the duration of the peace talks, the negotiating teams have agreed on rural reform, political participation and the guerrillas’ abandoning of drug trafficking.

Before a peace deal can be reached and Colombia’s 51-year-long war between the FARC and the state to be over, the negotiators have to find agreement on victim compensation, the end of conflict and the eventual reintegration of fighters and application of transitional justice.