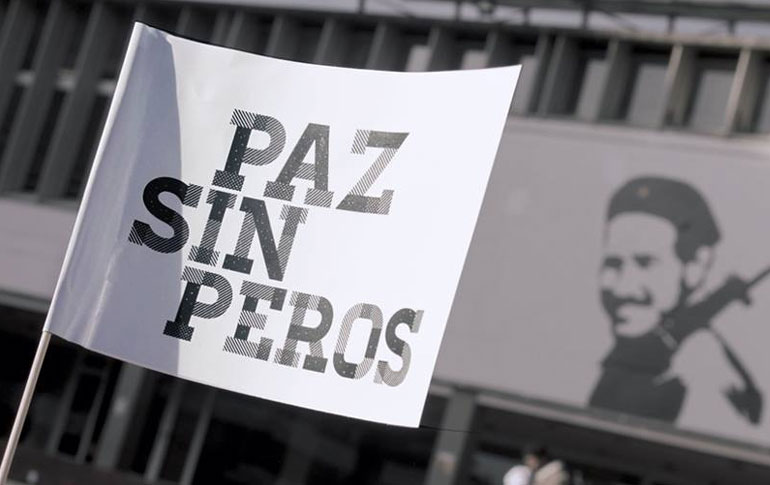 If the FARC wants peace, the guerrilla group will have to re-legitimize the negotiations by indefinitely ceasing all hostilities and including civil society to peace negotiations. If they don’t, the rebels might as well abandon peace talks now.

Things are not looking good for the future of the talks after incumbent President Juan Manuel Santos, responsible for the negotiations, got an electoral reality check on Sunday in the first round of elections that put him behind his main rival, former Finance Minister Oscar Ivan Zuluaga.

Zuluaga wants to effectively blow up the peace talks by imposing highly unfavorable conditions on the rebels. The hard-line presidential hopeful can count on the support of a significant conservative voter base which has so far failed to see any benefits of the talks and is highly skeptical of the outcome.

Among the critics of talks, there exists a sentiment that the deal that is being negotiated might come to fruition at the expense of civil society. There are fears that peace will only benefit those involved in the violence, and not for example the many victims.

I personally don’t share the skepticism to this extent. Instead, I think the ending of the peace talks would ruin a year and a half of progress during which a major drop in conflict-related deaths and kidnappings were recorded. Additionally, the government and FARC have said to have reached consensus on key issues like rural reform, drug trafficking and political inclusion. An end to these peace talks must be avoided.

However, I can comprehend critics — especially victims — who have no confidence in what is being cooked by the guerrilla group and the government. These critics do not mind blowing up talks which have had no definite outcome and have been testing the patience and faith of the Colombian people for a year and a half already.

I would mind blowing up the talks, but I never had a family member killed, kidnapped or raped, or have had personal experiences with many of the other atrocities committed in the context of the conflict. I’m not the one that needs reconciling, the Colombian people do.

MORE: Do we really trust Colombia’s politicians and guerrillas to deliver peace?

Critics have legitimate arguments that may not be ignored

Historically, the critics’ sentiment regarding peace talks is perfectly understandable because it has happened repetitively that civilians were ignored in talks and peace was never effectively achieved.

In 1958, following ten years of extreme political violence between the Conservative Party and the Liberal Party, both political powerhouses decided to end “The Violence” and divide political power. The partisan violence ended, but victims were unattended and the population was subjected to 16 years of pseudo-democracy while Liberal and Conservative politicians jointly robbed the treasury.

As a consequence, rebel groups were formed in 1964 to force the Bogota elite in control of government to allow a less unjust society. Paradoxically, one of these rebel groups was the FARC. It’s now 2014, 50 years later. That peace deal evidently never brought peace, it just perpetrated violence imposed on the Colombian people.

Earlier this century, a similarly crappy deal was cooked between the paramilitary AUC and former President Alvaro Uribe who prioritized the interests of dirty politicians over those of victims.

So, if people are concerned about potentially ending up with the consequences of a crappy agreement, you can’t really blame them, can you? How many peace deals that do not result in actual peace can you shove down a people’s throat?

You can simply not ask of Colombians to just have faith in the good intentions of a government that violently represses legitimate popular protests or a rebel group with a massive list of human rights violations. It just doesn’t make sense.

Those Colombians now willing to blow up the process have taken control of the future of their own country and are using their electoral power to enforce their right to self determination. They will not allow politicians or rebels to decide the future of their country for them. They want to be actively involved.

I personally believe Zuluaga’s a corrupt brute who will do more harm than good. I don’t think Zuluaga is able to deliver a more profound peace in a shorter period of time. Let’s be honest, the guy’s just as corrupt as any politician in this country. Electing him would be a pirate copy of the error made electing Santos. For pragmatical reasons, I would much rather put my money on the talks already happening between Santos and the FARC.

However, unless these two parties respond and demonstrate to be serious, the Colombian electorate will send them both to the jungle. And rightfully so.

Like I said, the critics have legitimate arguments to blow up the talks, and they will. If the FARC and Santos believe that this deal is beneficial to the people, they have three weeks to convince those who are willing to throw a rock through the shop window.

In order to do this, the delegates will have to come up with proper arguments and visible actions because patience has run out.

Santos is out, the FARC must act

Santos has blown it. He has no credibility left. Santos will not be able to convince any of his critics that — after four years of consistent lying and making false promises — his administration has the Colombian people’s interest at hand.

The FARC need to act instead. The rebels are the only ones who can convince their critics that this deal is good for those who fear the outcome. However, this requires concrete action, not words. It requires the FARC to urgently realize that they must make peace with the people, not the politicians. Fundamentally, the FARC must make compromises towards those who are willing to vote Zuluaga in order to be heard. The talks need popular support or they have zero legitimacy.

Those who the government and FARC have been calling the “enemies of peace” are in fact the constituency that can return the legitimacy to the talks and ensure lasting peace. They should not be alienated or marginalized, but included. If this is done, the talks will be seen as legit and we can move forward.

Proposals to save the talks

I personally believe the FARC when they say they want peace, but I urge the rebels to put their money where their mouth is immediately. Their own interests should temporarily be put behind that of the future of the country. Rebel sacrifices are needed.

Concretely, an indefinite FARC ceasefire — be it unilateral or bilateral — would help. It’s a concrete step to the effective end of at least the rebels’ half of the violence, it will save lives and it will be a compromise to the Zuluaga voters.

Additionally, both government and FARC should immediately invite members of civil society to the talks to unnerve the justified distrust. The FARC itself should make a clear and effective effort to begin a direct dialogue with civil society rather than its half-arsed government. They need to recognize their victims and talk with their political adversaries, one of the key elements of resolving issues peacefully.

Peace in spite of Santos

Let’s please not forget that this is about the future of the country, not the political future of its crappy president. We need to achieve peace in spite of Santos and Zuluaga. The president’s ruined it and is now a sitting duck. Santos already screwed up the countryside, human rights, key reforms in justice, education and healthcare, and the general credibility of Colombian politics.

If the FARC allows Santos to also screw up the prospects of peace, this would be a truly devastating blow for the people who deserve peace.

The rebels now have the opportunity and the moral obligation to show that at least they are serious and that we can trust their word. If they do, the Colombian people will support the talks when they take to the polls on June 15. If they fail, we’ll be back at point zero. Nobody, also not the critics, want that.