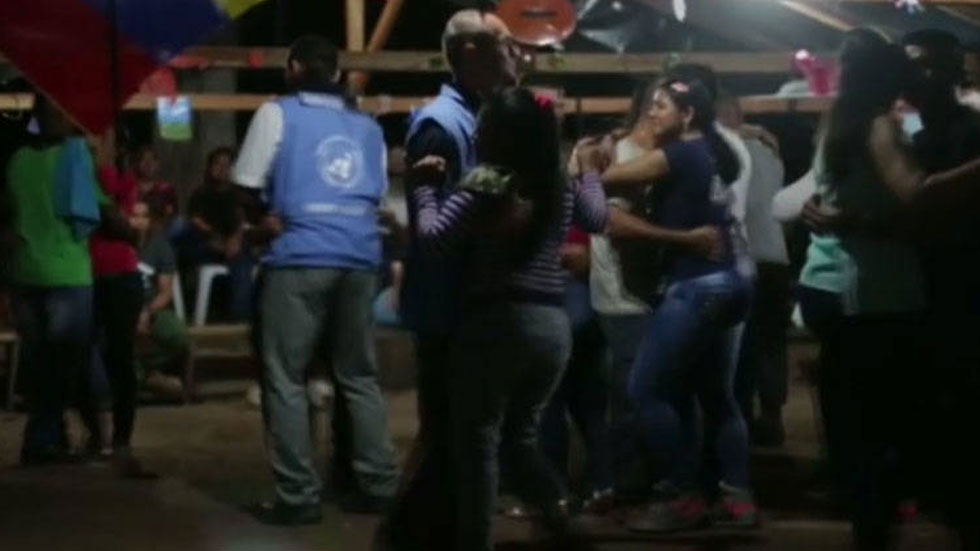 The FARC’s Martin Caballero front said Friday it would retreat from the verification mechanism that oversees the guerrillas’ demobilization and disarmament until the UN returns observers it suspended for dancing with the rebels.

The observers were removed after a video shot by Spanish new agency EFE on New Year’s Eve in which they were seen dancing with guerrillas of the block, which is awaiting demobilization in the northern La Guajira department.

According to the FARC, the video was filmed on a day of peace festivities organized by the mayor of Fonseca and included soccer matches to promote reintegration and peace.

The block demanded the UN reverses the suspension of the officials with whom the guerrillas claimed to have generated a sense of confidence.

The explosive reaction to the incident spurred the UN to go as far as suspending the four observers, much to the dislike of the Martin Caballero front who refuse to proverbially dance to the beat of the opposition leader, former President Alvaro Uribe.

While the former president’s Democratic Center party has cast doubt over the UN’s neutrality in the process, the FARC members feel the opposition and media are unjustly making a scandal of what they consider a positive incident.

“From this joyous and festive territory it hurts us that some media are judging the members of the UN for joining in the joy and the celebration, not only for the arrival of the new year, but for the end of a long war,” said the FARC in a statement.

“We prefer to see everyone dancing: soldiers, policemen, observers and opponents and fill our territories with enthusiasm and fraternity, instead of facing death; This is how the war ends, not with schemes from Bogota.”

The New Year’s Eve incident has created quite a stir with the conservative opposition that has been flexing its electoral and social muscle to underscore its significance ahead of a Truth Commission and a Transitional Justice Tribunal that does not just seek to try the estimated 16,600 FARC members, but also 24,400 (former) state officials and 12,500 civilians.

The UN has maintained that the removal of the personnel is a sign of their commitment to “verify with fair impartiality the parties’ commitments to the ceasing of fire and hostilities, and the abandonment of arms.”

However, the FARC’s retreat from the La Guajira verification commission leaves the remaining government observers with no legal standing in charge of the verification and monitoring for the FARC’s demobilization and disarmament.

This means that in the event of a serious irregularity or even a breach in the ceasefire or peace deal, no formal body has the authority to report this.

Colombia’s civil war – involving the army, the FARC and other guerrilla groups, as well as rightist paramilitaries – has claimed at least 260,000 lives and displaced millions of people.

There are 280 international observers from 14 nations in Colombia: 10 members of the Community of Latin American and Caribbean States and four European countries.