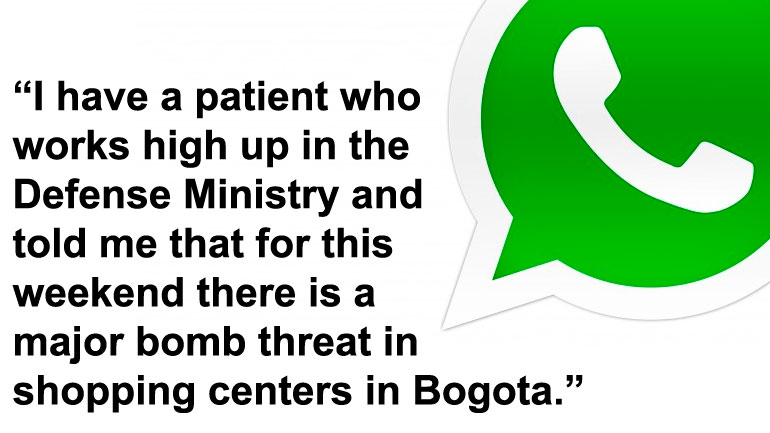 Colombian President Juan Manuel Santos said Monday that political opponents are behind hoax alerts about pending bomb attacks in the capital Bogota that went viral over the weekend.

In the alleged voice messages, men and women talk about pending attacks by leftist rebel groups in the capital that on Thursday suffered two bomb attacks, allegedly carried out by the ELN.

“I have a patient who works high up in the Defense Ministry who told me that for this weekend there is a major bomb threat in shopping centers in Bogota,” the messages that began spreading on Friday said.

The National Police published the audio to clarify these alleged threats were false and should be ignored.

The president subsequently released a statement, claiming the bomb threat rumors were spread by political opponents to undermine his government’s authority ahead of October’s national elections.

“This type of behavior is absolutely irresponsible because what it ends up doing is precisely magnifying the purpose of the terrorists, which is instill fear in the population,” Santos said.

Ahead of Thursday’s bomb attacks, Bogota authorities and the military had already announced to step up security measures following the leaking of a military report claiming the country’s largest guerrilla group was planning attacks on high-profile military targets.