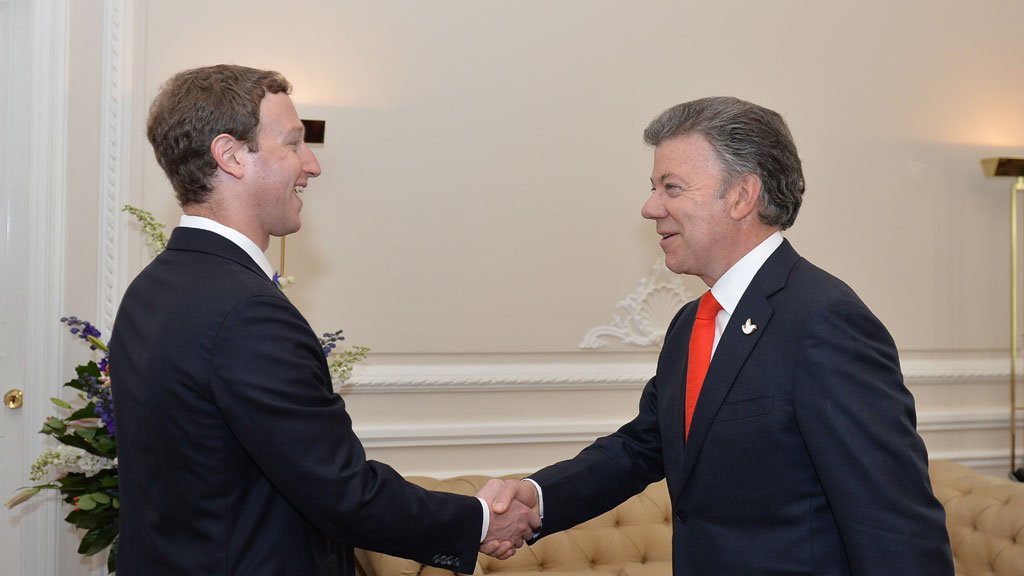 Facebook alliance with Colombia set to help the poor

The internet mogul and the Colombian head of state met in the presidential palace in Bogota to form an alliance which aims to provide some of Colombia’s poorest people with Facebook, along with a host of other educational applications, free of charge.

A new Colombia-focused Facebook will also be available, complete with national phrases and slang.

The alliance will be co-ordinated by Internet.org, a global partnership between technology leaders, non-profits, local communities and experts which aims to make the internet more globally accessible.

Initially, Internet.org be available to people with Tigo prepaid plans only.

The Colombian government expects other operators will join in the future however.

The service will offer, “free access to different online tools that relate to issues of education, health, work and communication,” Tigo said in a statement.

Aong with Facebook, these services include Wikipedia, Accuweather, Unicef, Your Money alogn with various other applications regarding education, health, gender and finance.

“This has wonderful, positive effects on equity and education, because it will allow all Colombians who own low-end phones, which have no possibility of access (Internet), to access various content,” said President Santos.

Furthermore, it “will allow free Internet access to users of low-end phones that work with most basic technology,” said the head of the Ministry of Information Technologies and Communications Diego Molano.

“This partnership with Facebook represents a great help to the challenge we have as a country to come up with applications of social impact to the lower income population. Applications and content that help to strengthen a country at peace, more equitable and more educated,” furthered Mr. Molano.

The President said that the idea came in a meeting with US President Barack Obama, in late 2013.

“We said: make a society, a true US/Colombia partnership, in education and technology,” said President Santos.

“That’s how we created a group of American businessmen, Colombian businessmen, with the US government and the Colombian government, hence this partnership we are today taking, consolidating between Facebook and Colombia emerged,” President Santos stated.

Colombia will be the first country in Latin America and  the fourth in the world after Zambia, Kenya and Tanzania to adopt Internet.org.

Colombia is one of the Latin American countries with the highest penetration of social network Facebook, with over 20 million users.

The new version of Facebook will replace the popular “Like” feature with “Bacano” (cool), “Friends” would be called “parceros” and “Groups” “parches.”