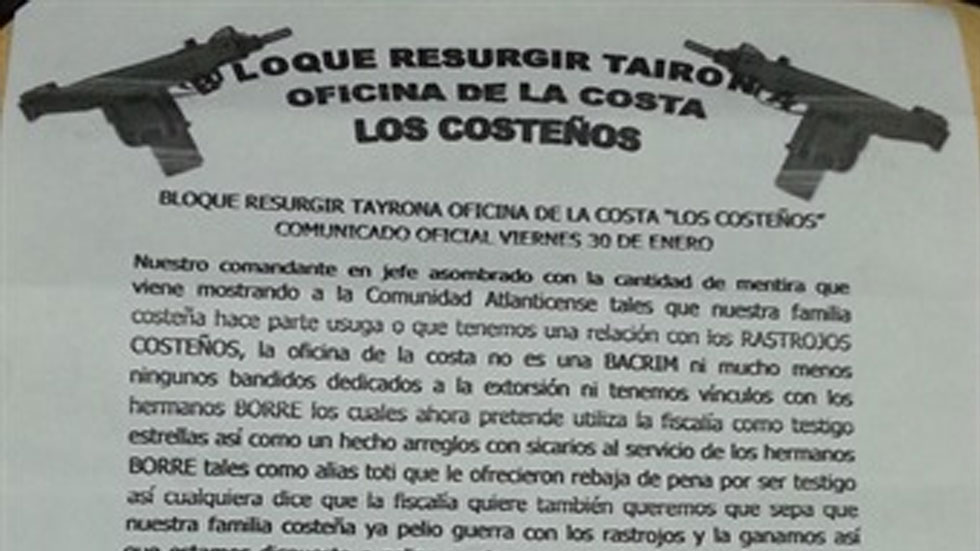 Extortion fell 18% in Colombia last year as FARC rebels signed peace with the government. However, crime and paramilitary successor groups are filling the void, according to an NGO and the defense ministry.

The increase in extortion rates in 70 municipalities formerly under the influence of the FARC guerrillas illustrates the growing presence of organized crime and paramilitary successor groups that seek taking advantage of the rebels’ demobilization.

According to defense data, since 2012, the year in which the peace process with the FARC started, extortion increased drastically instead of going down as the rebels apparently stepped up the practice for the duration of the peace talks.

2016 however was the first year that saw a drop, presumably due to the FARC leadership ordering a halt to extortion as the peace talks reached an advanced stage.

The end of 2016, nevertheless, saw an increase in extortion.

Colombia’s defense minister told El Tiempo newspaper that a year and a half ago extortion was rising in different areas of the country and today there are 1,220 fewer cases compared to last year putting it down also to increasing confidence in the authorities.

People are reporting more, which shows greater confidence in our institutions. And this is reflected in the fact that the authorities, including the judicial authorities, have been able to react better, to be more efficient.”

As the FARC continue with the demobilization process supervised by international observers, it is expected that they will have laid down their weapons before the end of May.

This however excludes the dissidence of the 1st Front who have chosen to reject the peace deal and remain outside the process continuing to extort in the provinces of Vichada and Guaviare.

The bigger problem regarding extortion lies at the hands of criminal groups that are seeking to exploit the absence of the FARC from areas where they used to control.

La Silla Vacia reported that based on information from Police Brigadier General Fernando Murillo, who is in charge of the Anti-kidnapping and Anti-Extortion Directorate,  32 prisons have been detected from where extortion is being carried out.

Authorities have prioritized they 12 including La Picota and The Model in Bogota, Picaleña de Ibague, in Tolima and Palogordo in San Gil, Santander, seizing more than 1400 cell phones and charged 137 inmates for extortion from jail

The FARC have continually asked that the government clamp down upon neo-paramilitaries and criminal gangs amid reports that they are already moving into areas vacated by the Marxist guerrillas.

The Santos administration however refuse to concede that neo-paramilitary groups exist claiming that they were fully demobilized during the presidency of Alvaro Uribe in 2006.

With the government set to begin peace talks with Colombia’s last remaining Marxist group the ELN next month, action must be taken regarding the other groups outside the law to ensure that the process doesn’t merely change the name of those involved in kidnapping and extortion.