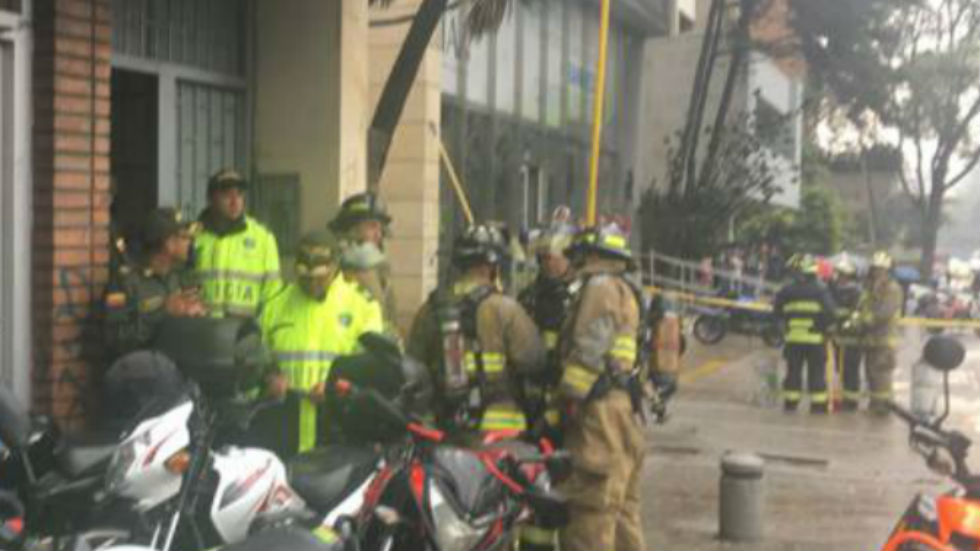 An explosive device was triggered at 11:45am on Wednesday morning near Bogota’s National Park leaving 9 people injured, according to Caracol Radio.

The explosion, which took place on the 5th floor of a housing block forcing authorities to evacuate the surrounding buildings including Colombia’s National Tax and Customs department (DIAN).

Apart from slight hearing issues none of the victims were left in critical condition, although one person was transported to the capital’s San Ignacio hospital to be assessed.

According to Bogota’s police force, the explosion was “a call for attention by way of an act of propaganda,” RCN News reported with minor damage caused by the explosion revealing a banner in the style of a yellow and blue flag with a red star in the middle which refers to the recent tax reform passed by the government.

After an inspection of the area, a pamphlet was also found bearing a message relating to the reform recently approved by Congress: “The peace of the rich is not the peace of the people.” Both the pamphlet and the flag bore the same logo.

The bill in question will seek to raise billions of dollars in the coming years to make up for lost oil revenue and preserve the nation’s investment grade credit rating.

Police in Bogota have stated that the detonation was caused by a home made bomb, triggered by two people from inside an apartment, reported RCN News.

It’s an apartment on the 5th floor being offered for rent. During the last two days an appointment was requested with the apartment tenants to look around, and today (Wednesday) the appointment was granted. On arrival, the two people who were said to be interested in the building proceeded to… place a flag on the window of the building facing Bogota’s 7th Street, and activated a home made bomb from the inside of the apartment.

The chief of police also acknowledged that there were aspects of Wednesday’s incident which “coincided with other recent attacks carried out on health organizations which we are examining.”

Authorities have dispelled rumors that more explosives have been deployed around other parts of Colombia’s capital city.