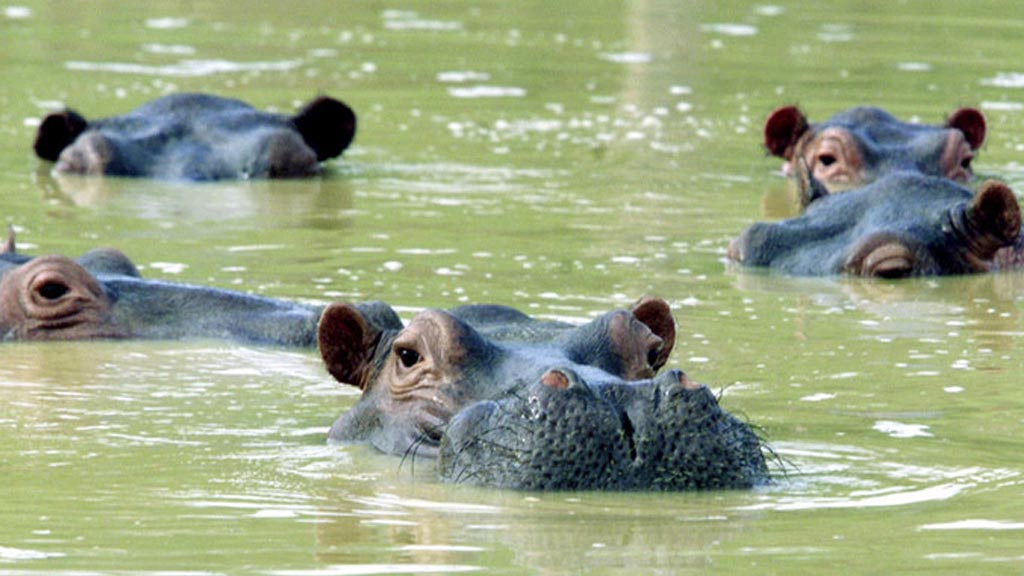 Locals in a town near the late Pablo Escobar‘s Haciendo Napoles have been both intrigued and terrified to find hippos wandering down their streets.

One of the rogue hippos was spotted in Doradal, a small village in the municipality of Puerto Triunfo, midway between Bogota and Medellin.

This is not the first time hippos have been seen in the area, and despite efforts at containing the rapidly growing population, it will probably not be the last.

As biologist David Echeverri Lopez of the environmental organization Cornare explained, “For many years, these animals have gotten out to the town, but they don’t do it everyday, they have defined routes, they just don’t always abide by them,” newspaper El Tiempo reported.

The vagrant hippos are another living vestige of Pablo Escobar’s reign of violence, living happily in the swampy Magdalena River basin in northern Antioquia.

In the early 1980s, the infamous drug lord brought four hippos as well as other exotic animals to his ranch, Hacienda Napoles, where they began reproducing. After Escobar was killed in 1993, some hippos were given to zoos, yet 24 very sexually active adult hippos took up permanent residency in the river near Escobar’s ranch.

In 2007, the Ministry of the Environment began receiving bewildered phone calls from residents of rural parts of Antioquia, reporting sightings of strange, giant creatures in the river.

There are now estimates of 50-60 wild hippos living in the region, composing the largest hippo population outside of Africa. They’re so content in the Colombian climate they’ve started becoming sexually active as young as three years old, whereas the typical age in Africa is between nine and eleven years old.

At first, Colombians saw these animals as cuddly and “floppy.” Then the hippos started roaming the countryside, trampling farmers’ crops and even small cows.

The environmental authorities have been working to educate locals about the potential dangers of the hippos, specifically for children.

To date, there have been no registered human injuries or deaths associated to Escobar’s renegade pets. However, their close proximity to nearby towns poses a serious threat to humans due to their territorial natures and the potential diseases they carry. The hippos may also be upsetting the local ecosystem and displacing local wildlife, such as the manatees.

According to Lopez, the authorities are currently in the first phase of a management plan to control the situation. After guaranteeing food for the animals, the first stage will consist of constructing a series of tall, hippo-proof walls to confine the animals. Once contained, they will work to sterilize them.

Castration, however, is highly costly and extremely dangerous for both veterinarians and for the hippos, who are surprisingly susceptible to the use of chemicals.

The high price tag will be difficult to swallow for a country struggling to come up with the money to conserve its own native species.

Unfortunately, there are no easy solutions to this unprecedented hippo dilemma, leaving only trial and error.

In 2009, the authorities found that tracking down and shooting Pepe the hippo was an error. His death successfully unleashed a hailstorm of anger towards the Colombian government, as well as a flash mob of 100 hippo-masked activists dancing to “the lion sleeps tonight” in Bogota in protest.