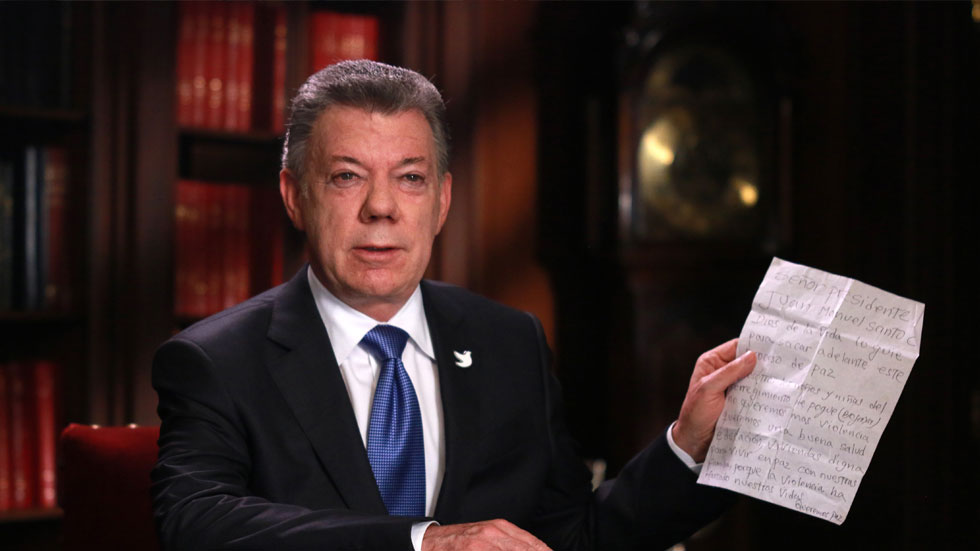 Colombia’s government and the country’s second largest rebel group, the ELN, announced formal peace talks would be inaugurated on October 27. The guerrillas vowed to release all their hostages before talks begin.

The ELN is the third illegal armed group to be in talks with authorities and the second to have come as far as formal talks with the national government.

The AGC, a.k.a. “Los Urabeños,” the country’s largest paramilitary successor group, is engaged in informal talks with the government of their home province, Antioquia.

The talks with the ELN took more than three years to formalize, Juan Manuel Santos said following the official announcement that was made by government and guerrilla negotiators in the Venezuelan capital of Caracas.

The talks will be led by government delegate Mauricio Rodriguez and hard-line ELN commander “Pablo Beltran.”

Unlike the FARC, with whom Santos has already been able to close a deal, talk with the ELN have been extremely difficult and often went hand in hand with violent outbursts.

But a referendum on Sunday that sank the FARC deal seems to have sped up disagreement about the ELN’s broadly despised kidnapping practices.

Before the formal announcement, the guerrillas had already begun with the release of hostages, two of whom were surrendered to the Red Cross.

According to the government’s chief negotiator, the ELN promised to release all its hostages before the first day of the talks on November 3, a condition imposed by Santos after agreeing to formal talks in June 2014, days before Santos’ reelection.

A ceasefire was not announced, meaning the warring parties will continue attacking each other while talks are underway in Quito, the capital of neighbor Ecuador.

However, the talks were never effectively formalized after President Juan Manuel Santos demanded the rebels release all their hostages, a demand the ELN said to expect once formally negotiating. The guerrillas gave in.

For Santos, who won a Nobel Peace Prize for successfully ending negotiations with the FARC, the announcement again comes at a convenient time.

The president is currently negotiating with opponents of peace with the FARC seeking broader support for the deal that was rejected by a minute minority of voters. More than 62% of Colombia’s electorate didn’t even take part in the referendum that has been met with skepticism since talks with the guerrillas formally began in 2012.