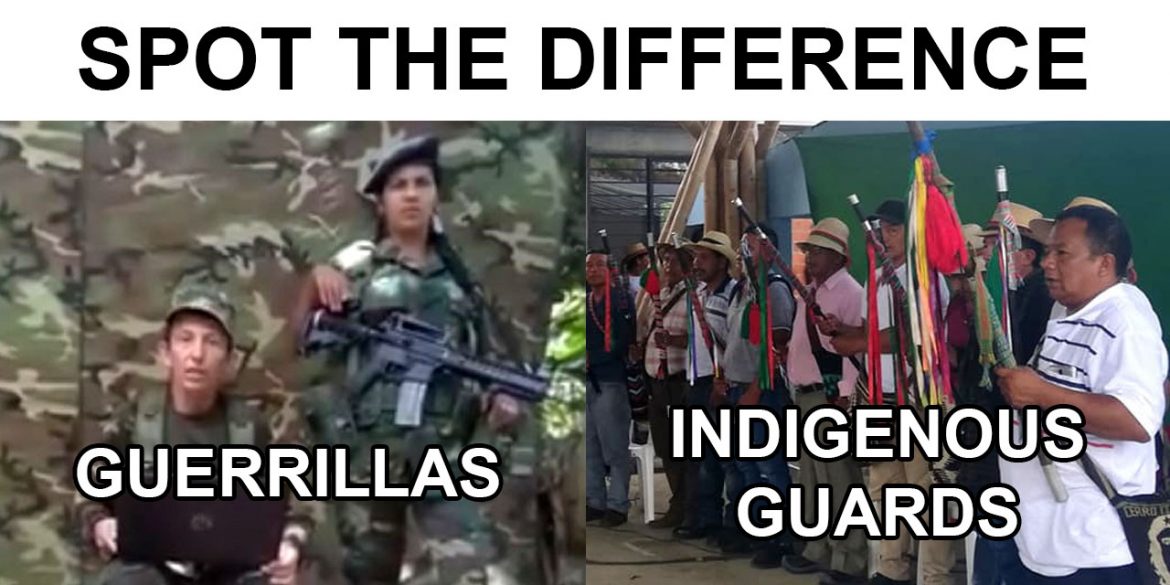 President Ivan Duque’s plan to send 2,500 soldiers to Cauca in southwest Colombia may be a military offensive against indigenous authorities rather than narco-guerrillas.

The announcement triggered a red alert both in northern Cauca, where dissident FARC guerrillas massacred an indigenous governor and four guards, and in Geneva, the main office of the United Nations’ human rights office.

Both know Duque is distorting the truth about the causes and suspects of deadly violence in the province, and that his allies occupy land that belongs to the Nasa people.

Regional indigenous authority CRIC said Friday that it fears the military will not be used to protect their communities, but to impose “a model of land dispossession.”

“The permanent police and permanent military attack on the indigenous guard and the communities that recover land in the municipalities of Corinto and Caloto to favor the interests of the sugar cane plantations,” said CRIC.

Duque’s distortion of the truth

In an interview with RCN Radio, Duque said that “the biggest challenge we have today in Cauca is the presence of these organized armed groups… FARC dissidents, who are trying to intimidate the community because they work in the service of cartels, including Mexican cartels.”

This is utter nonsense. According to think tank Indepaz, the primary reason behind the death of the 163 leaders who have been assassinated since 2016 is land.

Contrary to Duque’s claims, the cocaine trade in which the Mexicans have an interest is the last on the list of presumed reasons why Cauca’s leaders are being assassinated.

Furthermore, the majority of the leaders who have been assassinated were allegedly killed by unidentified assassins and paramilitary groups.

FARC dissidents are suspected of 19% of the murders, making them hardly the “the biggest challenge” in regards to public security.

The conflict of interest

The Colombian government committed to the acquisition of 15,000 hectares of land to be given to the communities,victim of the [1991 El Nilo] massacre. This commitment was partially fulfilled, but in 2005, the National Government leased 6,000 of the hectares set aside for reparation to Incauca S.A., which since then has been located in the lands assigned to the Nasa.

Ardila and the CRIC have been at odds with each other, because the indigenous communities have been “liberating” the lands that are being occupied by Incauca in violation of the deal between the Colombian state, the indigenous and the Inter-American Commission for Human Rights.

This has led to clashes with the military, which has been protecting Ardila’s private interests instead of the local community and their legitimate claims to the lands usurped by Incauca.

The military and the narcos

It is no secret that corrupt elements within the military have been working with drug traffickers and paramilitaries in the region since the 1990s.

In fact, “there are serious reasons to believe there are coordinated actions between sectors of the security forces and criminal groups,” the CRIC said Friday.

We do not know how arms enter the territory, how inputs for illicit crops enter, how shipments of marijuana and other products of illicit use leave, but it is completely evident that this is done through municipal and intermunicipal roads that are presented to the country as under control.

According to the UN’s human rights office, “the Nasa community has repeatedly raised the alarm with the authorities about threats to their safety,” but apparently to no avail.

The military and the massacre

Neither the CRIC nor the UN Human Rights Office understand how the alleged FARC dissidents who murdered indigenous governor Cristina Bautista were able to enter and leave indigenous territory in shiny black SUV’s without being noticed by the military that controls the entry and exit points.

There is a military base in the vicinity of where the massacre occurred. They also control territories’ entry and exit points, but have not guaranteed the security of the indigenous people.

We call on the authorities to establish a prompt, thorough, independent and impartial investigation into the 29 October killings in Northern Cauca, including into possible failures on the part of the authorities that may have allowed the massacre to happen.

The warnings to the indigenous communities

Duque’s vow to send troops has come with several messages to the indigenous communities indicating the military is not going to Cauca to protect the communities, but to invade autonomous indigenous territory where no armed group, legal or illegal, is welcome.

The Armed Forces must be allowed to enter the territories in order to provide the security that the indigenous people need.

It is very difficult to guarantee the security and protection of the indigenous people if the communities themselves oppose the Military Forces’ ability to fulfill their mandate.

The authorities and RCN have claimed that the military and the unarmed indigenous guard will work together, making the guards a direct military objective of FARC dissidents.

The CRIC responded that “the moment that the indigenous guard begins to coordinate with the security forces, it loses its autonomous character and its legitimacy based on the fact that its power comes from community force (never from arms or armed forces). The State cannot pretend to turn civil, autonomous, non-violent protection mechanisms into a wheel of a military machine.

The indigenous guard is an autonomous mechanism of territorial control, based on the strength of the community and the non-use of weapons, and is coordinated by the authorities themselves.

The UN Human Rights Office stressed “once again the urgent need for effective protection and preventive measures for indigenous peoples across the country, and particularly in the Northern Cauca region, in line with their right to land and their right to self-determination, as recognized by the 2007 UN Declaration on the Rights of Indigenous Peoples.”

We remind the Government that any preventive and protection measures taken which affect indigenous peoples should be agreed with their own authorities, in full accordance with their traditions and customary practices, autonomy and jurisdiction.

The government has ignored the indigenous’ persistent calls to implement the peace deal with the FARC, particularly the counternarcotics element that would reduce narco’s influence in the region.

Instead, it is sending the army, which in areas like Tumaco and Catatumbo has only triggered an increase in the killing of civilians and in northern Cauca has been protecting private property rather than the locals.