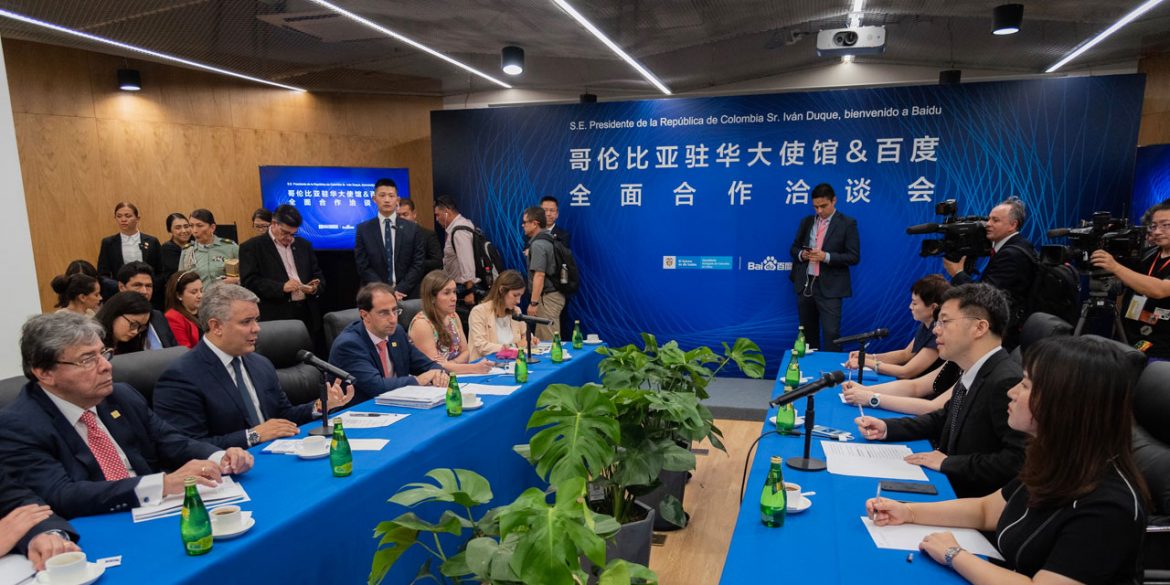 Colombia’s President Ivan Duque arrived in China on Sunday where he highlighted his quest to boost exports and Chinese investment, avoiding any controversy over Venezuela.

The president, accompanied by ministers and a trade delegation, arrived in Shanghai with two clear priorities: increase the export of agricultural products and investment in infrastructure and technology.

Duque and the businessmen have a lot to gain in regards to trade and investment, too much to make Venezuela a high-profile issue.

The Chinese mega-economy became Colombia’s second-largest export market after the United States last year, mainly because of Chinese imports of fossil fuels and oil that made up 94.1% of all export revenue.

While China’s increased need for fossil fuels are relatively secured, the need for products that would generate employment and fill the pockets of Duque’s powerful rancher friends are not.

Total exports to China went up 88.7% between 2017 and 2018, but exports of goods and services other than fossil fuels increased 18.4%, according to economic magazine Dinero.

China currently imposes a ban on the import of Colombian meat products due to hygienic concerns that Duque hopes to remove. If the president succeeds, this would open a major market for cattle ranchers like his political patron, Alvaro Uribe, who got him into office.

I hope that in the next few weeks we will have good news; that we will have the declaration of Colombia as a foot-and-mouth disease-free country, which will speed up the way for the opening of the meat market in China.

Duque also expressed optimism about the possibility to increase exports of agricultural goods like coffee, bananas and avocados, sectors that have historically suffered from the currency hikes attributed to the oil and mining sectors.

Particularly the coffee export sector has a lot to gain in China, Duque stressed. “We are exporting the equivalent of 40,000 bags of coffee to China. Colombia is producing more than 14 million bags,” adding that China’s share of coffee exports “is still very limited.”

I believe that if in this country we specialize in delivering coffees that are distinguished by their aroma, by their quality, what is known as specialty coffees, I believe that the goal we should seek in the coming years is to reach 100,000 bags and, obviously, aspire we can reach 300,000 bags of coffee in the next four years. This represents income for Colombia’s coffee growers.

Additionally, Duque expressed his intention to promote the export of bananas and avocados.

Possibly more important that growing Colombia’s exports to China is to increase Chinese investment in Colombia, which has been virtually nothing compared to other foreign trade partners.

Duque wants to make sure in his meetings with Chinese business leaders they know that “Colombia is a place to invest.”

The biggest priority is to seek Chinese stakes in infrastructure. According to Duque, he wants “Chinese investors to see strategic projects in our country” in port and road construction.

Furthermore, the president hopes to attract investment to develop his country’s hi-tech sector with Chinese money.

We are looking at issues like artificial intelligence, the internet of things, technologies like blockchain, or what is happening with fintech in our country.

One of the ways to improve all of the above is to strike a trade agreement with China, which Duque plans to discuss when he is in Beijing to meet with President Xi Jinping and other top bosses of the Communist Party that make the decisions about the Chinese economy.

Also in the Chinese capital, the president will stress that “we need China to be a privileged market for our agricultural products and, additionally, we want foreign investment to reach Colombia.”